Howard County can be a challenging jurisdiction for personal injury plaintiffs with serious injury and malpractice lawsuits.  But our firm has been successful in this venue.

Our lawyers, two of which are Howard County residents, know how to get maximum compensation for accident victims in Howard County.

Geographically, Howard County is a very large county, but it has a small population relative to its size. It has a relatively small court system. To put its size in context, there are six times the number of Circuit Court judges in Baltimore City than there are in Howard County. 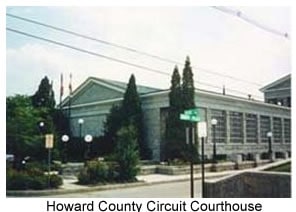 Our lawyers have a more moderate take. Our attorneys believe that this is a good jurisdiction if the plaintiff is severely hurt or it is a fatal accident claim.

But let's be honest: any personal injury lawyer would always prefer to try a tort case in Prince George's County or Baltimore City.

Typically, and obviously, this is a broad brush rule with many exceptions, plaintiffs prefer jurors from Columbia as opposed to the western part of the county. But Howard County has changed a lot, and this preference for Columbia jurors is not what it was 20 years ago.

But the better question is can you win a good lawsuit in Howard County?  With good facts and a good personal injury lawyer, you absolutely can.

All of this commentary relates to cases in Howard County Circuit Court.  For accident and malpractice attorneys handling smaller cases - we don't - district court judges in Ellicott City are known for giving fair compensation to accident victims.

There are about 300 personal injury cases filed in Circuit Court in Howard County. So there is a significant volume of lawsuits. But it is still a very quaint, old courthouse that has a Mayberry feel to it. The Circuit Court building sits at its historic location on a hill overlooking old Ellicott City. The building itself is a combination of some original structures along with several modern additions all of which have been interconnected over the years.

Despite this disorganized layout finding your courtroom is always easy simply because Howard County Circuit court is just not that big compared to other counties.

The District Court is in a more modern office building located about a mile up the road.

You can find the Howard County Circuit Court at 9250 Judicial Way, Ellicott City, 21043.

You cannot predict settlement compensation payouts in your case by looking at example settlements and verdicts in Howard County.  There are too many variables that go in any personal injury case that trying to compare one to the other and extrapolate a settlement amount is just impossible.  Still, along with other valuation tools like type of injury, you can get a better range of the settlement compensation payouts in cases similar to yours. Hiring a Personal Injury Lawyer in Howard County

Our law firm handles a substantial number of our serious personal injury cases in Howard County, including Columbia, Ellicott City, Clarksville, Clarksville, Laurel, Glenelg, Jessup, and Sykesville, If you have been injured in a motor vehicle accident or by medical malpractice call us 800-553-8082 or select here for a free consultation.

Neighboring JurisdictionsRelated Information
Columbia Personal Injury Lawyers Police Reports - Howard County
Practice Areas
Client Reviews
★★★★★
They quite literally worked as hard as if not harder than the doctors to save our lives. Terry Waldron
★★★★★
Ron helped me find a clear path that ended with my foot healing and a settlement that was much more than I hope for. Aaron Johnson
★★★★★
Hopefully I won't need it again but if I do, I have definitely found my lawyer for life and I would definitely recommend this office to anyone! Bridget Stevens
★★★★★
The last case I referred to them settled for $1.2 million. John Selinger
★★★★★
I am so grateful that I was lucky to pick Miller & Zois. Maggie Lauer
★★★★★
The entire team from the intake Samantha to the lawyer himself (Ron Miller) has been really approachable. Suzette Allen
★★★★★
The case settled and I got a lot more money than I expected. Ron even fought to reduce how much I owed in medical bills so I could get an even larger settlement. Nchedo Idahosa
View More
Submit a Law Firm Client Review
Our Firm ›
Attorneys ›
Medical Malpractice ›
Personal Injury Practice ›
Communities Served ›
Injury Victim Help Center ›
Plaintiff Attorney Center ›
Insurance Company Insight ›