The Prince George's County personal injury attorneys at Miller & Zois represent victims who have suffered life-changing injuries due to medical malpractice, auto and truck accidents, and other types of accidental injuries.

Our law firm has an impressive record of success winning big jury payouts and settlement amounts in PG County injury cases. Our lawyers have settled or won a verdict for our clients in every Prince George's case our law firm has handled to completion.

Prince George's County is the only jurisdiction in Maryland where both Circuit Court and District Court are favorable venues for Maryland personal injury lawyers fighting on behalf of injured clients. Juries in this county have historically given awards in civil tort cases that are fair considering the Plaintiff's injuries.

In the serious injury cases our law firm handles, personal injury victims typically have the best chance of success in Baltimore City and Prince George's County. Opinions differ from attorney to attorney as to which of these venues is more favorable. But there is some empirical data available that suggests that Prince George's County jurors give slightly higher compensation than Baltimore City jurors in civil court.

PG County Personal Injury Attorneys With a Record of Success

The Prince George’s personal injury lawyers at M&Z have had a track record of amazing results in many of the cases we have tried in this jurisdiction, including an $8 million jury verdict in a wrongful death case and the verdicts listed above. (Go here to see what some of our clients have said about our results in Prince George’s County cases.)

These are the last four Miller & Zois jury verdicts in Prince George's County:

We have recovered millions more for our clients in P.G County since these verdicts.

Our malpractice and accident attorneys are very comfortable asking P.G. County juries to compensate our clients fairly. Our lawyers find that insurance adjusters are more reasonable in these cases leading to more settlements without going to trial.

These results are due to our track record of success and the history of fair monetary awards in this jurisdiction in general. So our settlement compensation amounts have even higher values in Prince George's County than in other Maryland counties.

Demographically, this region is quite ethnically diverse. For people self-identifying as belonging to a single race, 2020 census results show the following breakdown: 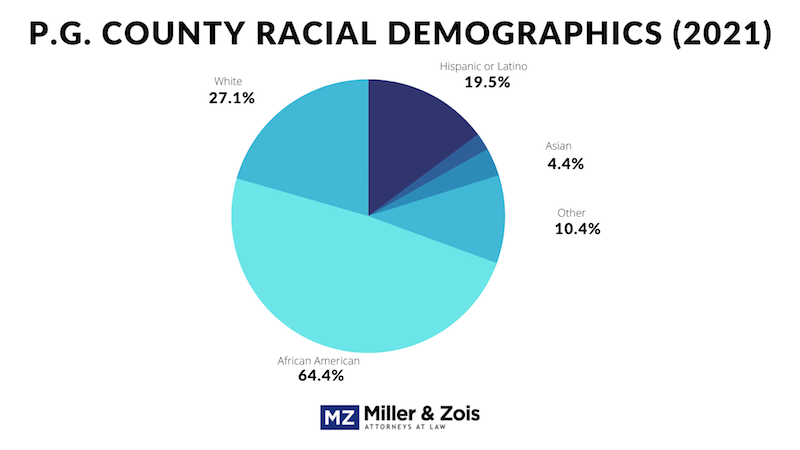 But for our lawyers' purposes - looking at the demographic make-up of the potential jury pool = these numbers, at least, offer a reasonably reliable snapshot of the makeup of likely jurors in this jurisdiction. Our lawyers think the take-home message is that diverse counties tend to be, for whatever reason, generally fairer to plaintiffs.

So what you have in this county is educational and cultural diversity. For us, the lesson from all of this is that P.G. County is ethnically, culturally, and educationally diverse. Juries that have diversity tend to be, in our opinion, fairer in compensating victims than homogenous juries.

The Path to Trial in Prince George's County

The Circuit Court for Prince George’s County does a good job getting civil injury cases to trial as scheduled. In almost every case, the trial takes place before the “try by” date set by the assignment office.

The Circuit Court does a good job identifying cases that may benefit from Alternative Dispute Resolution, such as mediation. The court will assign cases to its Mediation Program. The cases are sent to one of several retired judges who will work hard to move the parties closer to settlement.

Currently, the court is running a pilot program where Pretrial Conferences are done by telephone conference with a judge. This makes the court more efficient by not requiring the attorneys and parties to appear in person for a scheduling conference that typically takes only a few minutes. Hopefully, this program will expand to the entire civil docket. Because it is hard to ask our busy clients to appear in court when they are not needed.

The political and demographic composition of the Prince George’s County bench has evolved along with that of the county. Below are the active (and "retired" active) judges on the P.G. County Circuit Court as of 2021:

These are the P.G. County District Court judges:

"Ron Miller and Miller & Zois were invaluable in helping me through a tough time after my foot was broken. I was in a cast; I couldn’t work, and medical bills were piling up. I was looking for answers and I found them when I hired Miller & Zois. Ron helped me find a clear path that ended with my foot healing and a settlement that was much more than I hope for. I would strongly recommend this firm to anyone who has been seriously injured."
Aaron Johnson (Prince George's County)

"I had confidence in the lawyers at Miller & Zois from my first meeting with them. It was obvious they cared about me and my case. When the offer to settle my accident case was a little low, they filed a lawsuit and before long the insurance company settled the case for more than twice the original offer!"
D.B. (Prince George's County)

"When I came to Miller and Zois initially for advice I'd been with an attorney who I didn't feel was looking out for my best interests. I was so relieved to find Ron not only incredibly helpful and knowledgeable but also very supportive and not at all pushy. Both Laura and Ron were always willing to answer any questions and offer advice and opinions, all the while making certain I knew that all the decisions were mine to make. I so appreciate all the time and effort everyone put forth to help settle my case and my nerves. I don't think I could have found attorneys more supportive, direct, and who were genuinely concerned about me and my welfare."
Gina Hallman (Prince George's County)

"I was involved in a car accident in which the other driver was at fault. The driver's insurance company rejected my claim and was told they would do nothing about it. After a search for legal representation, I came across Miller and Zois. They took my case and I have had no regrets since. Miller and Zois maintained interest, compassion, and knowledge when dealing with my case. The lines of communication were open throughout maintaining me up to date every step of the way. I went from an insurance Company rejecting my injuries caused by their driver to settling outside of court for a substantial amount. A thank you is a simple understatement in expressing my appreciation to Attorney Ron Miller and his team. Once again with much gratitude."
Y.F.A (Prince Georges County)

"Initially, the insurance company made a low five-figure offer to settle my case, but Bob Fiore and Sara (his paralegal) put together a solid case and ultimately the case settled at Mediation for almost 20 times that original offer. It was a long journey, but I always felt I was in the best of hands with Bob and Sara. They worked effectively with my medical providers to ensure all the medical documentation accurately told my story of physical and emotional injuries from having been rear-ended by a tractor-trailer on the Capital Beltway [in Prince George's County] on my way to work. Those injuries ended my once promising and high-paying Federal Government management career. Bob took depositions of witnesses and guided me through my own deposition. Besides being outstanding advocates, Bob and Sara showed me tremendous compassion throughout the litigation process and a genuine concern for my well-being. I can't thank them enough!"
T.R.

Our lawyers handle a substantial accident and malpractice cases in P.G. County, including Bowie, Laurel, Greenbelt, Adelphi, Beltsville, Calverton, College Park, Cheverly, Landover, Lanham, Largo, Clinton, New Carrollton, Fort Washington, and Oxon Hill. Our attorneys have recovered tens of millions of dollars in settlements and verdicts for our clients in these cases.

If you have been injured, call to speak to one of our personal injury accident attorneys at 800-553-8082 or get a free online consultation.

PG County Case Values
Practice Areas
Client Reviews
★★★★★
They quite literally worked as hard as if not harder than the doctors to save our lives. Terry Waldron
★★★★★
Ron helped me find a clear path that ended with my foot healing and a settlement that was much more than I hope for. Aaron Johnson
★★★★★
Hopefully I won't need it again but if I do, I have definitely found my lawyer for life and I would definitely recommend this office to anyone! Bridget Stevens
★★★★★
The last case I referred to them settled for $1.2 million. John Selinger
★★★★★
I am so grateful that I was lucky to pick Miller & Zois. Maggie Lauer
★★★★★
The entire team from the intake Samantha to the lawyer himself (Ron Miller) has been really approachable. Suzette Allen
★★★★★
The case settled and I got a lot more money than I expected. Ron even fought to reduce how much I owed in medical bills so I could get an even larger settlement. Nchedo Idahosa
View More
Submit a Law Firm Client Review
Our Firm ›
Attorneys ›
Medical Malpractice ›
Personal Injury Practice ›
Communities Served ›
Injury Victim Help Center ›
Plaintiff Attorney Center ›
Insurance Company Insight ›