Garrett County, the westernmost county in Maryland, sits below the Mason-Dixon line. Invisible to most of Maryland, this county is an outdoor enthusiasts delight. It is also bigger than most people realize, with about 30,000 residents.  The country is linked to Pittsburgh (which means it has a lot more Steelers fans than the rest of Maryland would like).   It also shares a border with West Virginia.

The country gets a good bit of tourism with the Wisp (Ski) Resort and Deep Creek Lake, which is an absolutely beautiful piece of water. The biggest nursing homes in Garrett County Dennett Road Manor and Oakland Nursing & Rehab Center.  Many rural Maryland nursing homes are beyond awful but these are certainly not as bad as some. 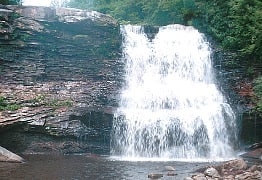 This county has historically been a conservative jurisdiction for civil tort claims. But the sampling size of jury verdicts is very small. There are not a lot of jury trials in Garrett County. In fact, no one can remember a malpractice verdict ever in Garrett County.  In 2017, there were only 19 lawsuits filed in Garrett Court Circuit Court, 10 of which were auto tort cases.

But we believe can get great results with an Oakland jury in serious cases. The county is not much different from Allegany. The juries are essentially the same breed of people. They may not throw money around carelessly but these are real, regular people that do understand human suffering. If you have a smaller car accident cases with minor injuries, you are not going to get very far. But in a serious injury or death case, you can expect a jury to award fair compensation.

Some smaller cases go before judges in District Court. It is hard to assess how these cases are being valued because there is no District Court judge.

Hiring a Lawyer for Your Claim

We are not located in Oakland/Garrett County or even Allegany County (Cumberland). If you want a purely local attorney, don't call us. But if you have a serious injury and want to get quality experience counsel with a real history of results, this is harder to get in a place like Garrett County, in part because the lawyers there simply do not see as many cases as we do because we cover the entire state of Maryland (and often beyond).  Call us today at 800-553-8082 or select here for a free consultation.