Why so low? This is the median truck accident verdict, not the average settlement payout. The average verdict will be higher than the median verdict. We have not seen average rear-end truck crash data (we estimate below), but we do know that 12% of the verdicts in rear-end truck accident cases are over $1 million.  These are national statistics but our lawyers think these statistics hold up well for Maryland.

A more pressing question might be how do victims only win 63% of these hit from behind cases. That is a tough question to answer. Bad lawyers or people unrepresented by counsel? Certainly, defense lawyers representing trucking companies have a lot of tricks up their sleeve but this 63% number makes no sense.

Okay, so what if you were not in a truck crash, but a car accident. There is no data available that our lawyers have seen that shows the average rear-end settlement or verdict for a rear-end accident.

You can expect, in general, terms, the settlement payout to be less simply because the force of the collision caused by cars is usually less than you see in big rig crash cases.

In Maryland, the median - as opposed to average - accident payout in a verdict is around $12,000. This means that most car crash cases that go to trial in Maryland are not serious injury or death cases.

So you have to look more at the type of harm as opposed to the mechanism of injury to determine how much money you will get in compensation. That's the better test. Juries don't care how the collision happened. They want to know how hurt you are.

How Much Is Average Payout in a Rear-End Truck Accident Case?

Our truck accident lawyers estimate the average settlement value of a truck accident case involving a rear-end collision (where a truck rear-ends another vehicle) is around $150,000 to $200,000.  But exact statistics are not available.  Most lawyer prefer median verdict data. The median jury award in rear-end truck accident cases is $93,909 and 12% of verdicts in these cases are over $1 million.

What Impacts the Value of a Rear-End Truck Accident Case?

The primary factor that drives the settlement value of a rear-end truck accident case is the extent and severity of the plaintiff’s physical injuries. If the plaintiff suffers serious, permanent injuries such as a brain injury, ruptured spleen, or broken leg, the potential value of their case will be much higher.

If You Get Rear-Ended by a Truck, Is It Always the Truck Driver’s Fault?

If a truck hits you from behind, the truck driver is almost always going to be found to be responsible for the accident. The truck driver has a duty to maintain a safe distance from vehicles in front so that he can stop the truck in time to avoid a collision. There are some limited instances where the truck driver may not be at-fault in a rear-end collision, such as failure to yield.

Below are a few sample rear-end truck accident verdicts and settlement to give you some idea of how lawyers and juries are determining the worth of rear-end car accidents.

Do not extrapolate too much from these examples. The axiom "every case is different" really does apply here.

But while there is no predictive value in how much of a payout you will get, looking at verdicts and settlements does give you a deeper lens into the possible range of compensation payouts for a particular case, particularly when used in conjunction with other case value evaluation tools. 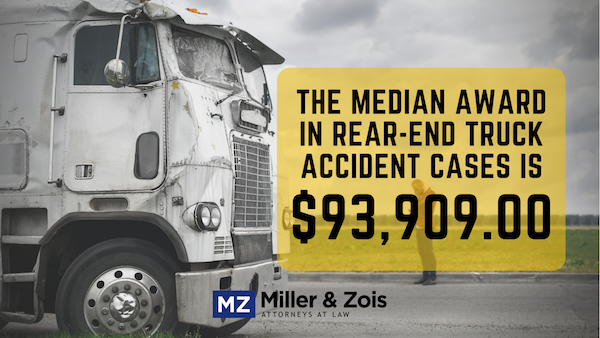 Hiring Our Truck Accident Lawyers
If you have been seriously injured - we handle only serious injury and wrongful death claims - in a car, truck, or motorcycle accident, we may be able to help you. You can get a free online consultation, or you can call our car and truck accident lawyers at 800-553-8082.
Practice Areas
Client Reviews
★★★★★
They quite literally worked as hard as if not harder than the doctors to save our lives. Terry Waldron
★★★★★
Ron helped me find a clear path that ended with my foot healing and a settlement that was much more than I hope for. Aaron Johnson
★★★★★
Hopefully I won't need it again but if I do, I have definitely found my lawyer for life and I would definitely recommend this office to anyone! Bridget Stevens
★★★★★
The last case I referred to them settled for $1.2 million. John Selinger
★★★★★
I am so grateful that I was lucky to pick Miller & Zois. Maggie Lauer
★★★★★
The entire team from the intake Samantha to the lawyer himself (Ron Miller) has been really approachable. Suzette Allen
★★★★★
The case settled and I got a lot more money than I expected. Ron even fought to reduce how much I owed in medical bills so I could get an even larger settlement. Nchedo Idahosa
View More
Submit a Law Firm Client Review
Our Firm ›
Attorneys ›
Medical Malpractice ›
Personal Injury Practice ›
Communities Served ›
Injury Victim Help Center ›
Plaintiff Attorney Center ›
Insurance Company Insight ›