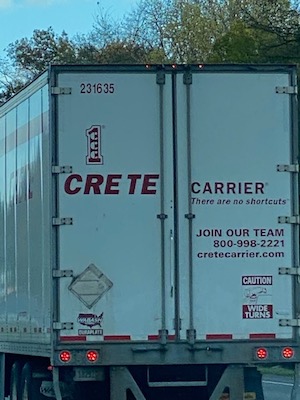 Crete Carrier Corporation is an umbrella trucking company that, in addition to Crete dry vans, also includes Shaffer Trucking for temperature controlled services and Hunt Transportation for flatbed services. Crete is based in Nebraska, but most of the 485 crashes that Crete trucks have caused in the past two years occurred in the South and Mid-Atlantic regions of the United States. In Maryland alone, nine Crete vehicles were involved in traffic accidents from 2012-2017.

Crete increased the cruise control maximum from 62 mph to 65 in 2017. The purpose is to deliver goods faster. This allows Crete to make more money. Will three miles an hour difference cost lives? If you are as big as Crete, it very well might.

But Crete isn't necessarily a bad company. In fact, it has a fairly positive reputation among truck drivers. Crete does not let its trucks wear down. the average age of a Crete truck is less than two years old. This is impressive. But at a certain point, safety is just a numbers game. As the 14th most prolific trucking company in North America, with 5,243 drivers covering more than five million miles per year, Crete is bound to cause a few accidents. Some of these accidents are caused by bad drivers. The trucking industry is undergoing a major shortage of labor. In desperate times, some companies might be tempted to relax their hiring standards. More commonly, tractor-trailer accidents are exactly that - accidents.

Trucking companies are compelled by increasingly demanding delivery schedules and limited by the driver shortage. As a result, trucking company managers push their drivers to spend more hours on the road with fewer breaks. Even the best truck drivers are more easily distracted when they're over-tired. Ultimately, Crete Carrier Corporation is responsible for the damages caused by their employees and vehicles. This is true whether an accident resulted from a bad driver or bad driving conditions,

Why Do Crete Truck Accident Cases Have a Higher Settlement Value?

Most vehicle accident cases do not involve a significant liability dispute, so the real conflict is over the settlement value of the injuries. In an ideal world, this would mean the identity of the defendant should make no difference to the jury. The jury, instead, would focus on determining the proper amount of money damages that would make the victim whole. But in the real world, the defendant can make a difference. Suits against a big company with deep pockets tend to result in larger jury awards than suits against sympathetic grandmothers or timid teenage drivers. Because few people have particularly warm feelings toward Crete, even among those who admire the company, juries are unlikely to act on empathetically toward Crete. This levels the playing field for victims. Therefore, the trial value of a personal injury claim tends to be higher with Crete and other big trucking companies.

Because Crete trucks are capable of causing more damage than passenger cars, Crete claims adjusters can also have a positive impact on settlement value. Crete claims adjuster, accustomed to dealing with the larger dollar amounts that accompany big, heavy tractor-trailer accidents, can be biased toward assessing large compensatory damages.

What Else is Different About a Claim Against Crete?

Due to the complicated tangle of state and federal regulations regarding trucking companies, lawyers who regularly handle car accident cases are not necessarily qualified to handle a truck accident case against Crete. For example, a good truck accident attorney should know about the accident-related data that is often required to be stored. Most tractor-trailers are equipped with instruments that can measure speed, airbag employment, and many other data points from the time of a crash. These data can help ascertain whether Crete was at fault for the collision, if your attorney knows where to look and how to use them.

Sample Settlements and Verdicts Against Crete

Our website has a variety of tools to help victims understand the possible trial or settlement value of their truck accident claim. The average settlement value for the same type of accident, or even more telling, the same type of injury can be a particularly predictive statistic. Samples of settlements and verdicts for claims against Crete, listed below, may not be particularly helpful for determining the value of a future case. But in very limited and general terms, they can paint a picture of how settlement and trial value depends on jurisdiction, severity of injury, and extent of economic loss.

We see a lot of claims against a lot of different trucking companies. Here is a look at the rest of the major players in Maryland.

Our law firm is based in Maryland. Most of the truck collision cases we handle are in the Baltimore-Washington area, but we handle significant injury cases throughout the entire country. If you have been harmed in an accident with a Crete truck and want to consider a lawsuit or a claim for an out-of-court settlement, call one of our lawyers at 800-553-8082 or click here for a free no obligation Internet consultation.