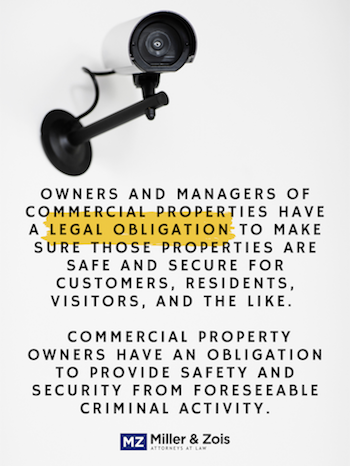 Negligent security lawsuits are a part of Maryland’s premises liability tort scheme. Under Maryland law, property owners have a duty to ensure that people on their premises are not the victims of foreseeable crimes. When a property owner fails to provide adequate protection and crime results, she may be liable. Our security negligence lawyers in Maryland and Washington, D.C. handle these lawsuits.

Property owners have an increased duty of care when they open their premises to the public for business. This makes sense because when people come to public places, they expect a higher level of safety and security.

Suing for Negligent or Inadequate Security

Owners and managers of commercial properties have a legal obligation under Maryland premises liability law to make sure those properties are safe and secure for customers, residents, visitors, and the like. This obligation is not limited to putting a caution sign on a slippery wet floor or eliminating fire and tripping hazards. Commercial property owners also have an obligation to provide safety and security from foreseeable criminal activity.

Suing a property owner or manager for negligent or inadequate security is a special type of premises liability lawsuit. Plaintiffs in negligent security cases are generally patrons who are visiting a commercial property and get criminally assaulted and injured.

If the assault could have been prevented (or made less likely) by reasonable and appropriate security measures at the property, the victim has a valid lawsuit premises liability lawsuit against the owner and/or manager of that property.

Negligent security claims typically involve commercial or retail properties such as apartment complexes, shopping centers, parking garages, hotels, and other properties with invited patrons or guests. Negligent or insufficient security at a commercial property can range from things like inadequate lighting to a lack of security guards or working door locks.

EXAMPLE 1: Parking garage is located in a high-crime area. The garage is automated with no human attendants or security guards. It has poor lighting and only one security camera at the entrance. A woman returning to her car late at night is robbed and assaulted. She has a valid claim against the garage owner because the assault could have been prevented or deterred by a security guard, better lighting, cameras, etc.

EXAMPLE 2: Apartment complex is located in the downtown area. There is no doorman or security guard. There are some security cameras but their presence is not obvious. Access to the outdoor common area and lobby requires a keycard; however, the keycard access system has been broken for some time allowing anyone to enter. A tenant at the complex is violently assaulted in the common area by an angry ex-boyfriend who entered through the broken access gate and waited for her to come home. She has a valid claim against the apartment complex for negligent security.

EXAMPLE 3: A popular bar and nightclub serves alcohol to large crowds of relatively young patrons. Alcohol-induced fights, altercations, and assaults have happened at similar establishments but never at this particular bar. The bar owner has only one security guard at the front door and no formal policy of non-service to patrons who appear to be too drunk or aggressive. A group of young men come in and get very intoxicated and aggressive. Bartended continues to serve them and they eventually assault and injured 2 other patrons. Assault lasts nearly 20 minutes before police arrive. The injured patrons have a valid claim against the bar for inadequate security.

Below are recent jury verdicts and publicly disclosed settlements in lawsuits involving claims of negligent or inadequate security against property owners. Remember these verdicts and settlements are large because the harm caused is so severe.

Not many lawyers are taking negligent security cases unless the losses are extreme.  There are not many reported settlements in inadequate security lawsuits because the settlements are usually extremely confidential.

What is the average negligent security settlement or verdict in personal injury lawsuits?  Older data shows an average verdict of $600,000.  That has likely increased in recent years because juries are increasingly demanding accountability for businesses who put profits ahead of people.
What Is Required to Prove a Negligent Security Claim in Maryland?

Four elements must be proven to win a negligent security claim in Maryland:

The element that gets the most attention in negligent security cases in Maryland is the first element: did the defendant have a duty to protect the victim?

Does a Property Owner Have a Duty to Repair a Known Dangerous or Defective Condition to Prevent a Foreseeable Criminal Attack?

Under the seminal premises liability case of Hemmings v. Pelham Wood in 2003, the Maryland court ruled there can be an obligation for a property owner to prevent a foreseeable criminal attack. So a property owner must use ordinary care to protect its customers or tenants from injury from foreseeable risks of criminal activity.

Who Decides in Maryland Whether the Security Was Negligent?

Whether the defendant's security was negligent will usually be a question for a jury to decide in Maryland. The jury must balance the risks of failing to provide the level of security that would have prevented the injury with the expenses that would have cured the risk.

Negligent security lawsuits are often high stakes with very serious injuries or death involved. If you have a negligent security claim you need a good, effective team of security negligence lawyers on your side. Contact the personal injury attorneys at Miller & Zois at 800-553-8082 or contact us online. 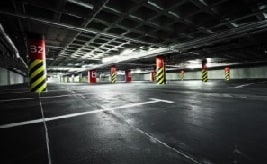 The analysis of whether there may be liability in a negligent security case in Maryland begins with the question of duty. What duty did the property owner owe the victim? Historically, the general rule has been that there is no duty to protect patrons or anyone else from criminal acts of a third party.

But Maryland has carved out many exceptions to this rule. Exceptions to the general rule that actors owe no duty to individuals for the tortious acts of third parties include: a) custodial control over the tortfeasor, b) a special relationship, and c) a statutory duty.

A 2016 case helps our cause in negligent security cases. In Kyriakos v. Phillips, the Maryland Court of Appeals ruled that Maryland law will find a duty of care where a defendant engages in affirmative conduct creating a foreseeable risk of third-party harms, even in the absence of a special relationship or control. This duty is imposed not because the defendant's own affirmative, dangerous conduct increased the foreseeable risk of third-party harms.

So to have a failure to provide adequate protection case, a plaintiff must prove that the property owner owed them a certain duty of care, that this duty of care was negligently breached, and that this breach was a contributing factor to the personal injuries the victim suffered.

As these cases often deal with criminal acts, the negligence of the property owner does not have to be the primary cause of the plaintiff’s harm. Rather, the plaintiff only has to prove that the owner’s failure to meet the duty of care was one element that increased the likelihood of danger or harm.

Security usually involves a building or space open to the public and a security problem that the owner could have avoided. These negligent security cases often take place at:

Failure to avoid foreseeable harm is negligence on the part of the property owner. Negligent acts can include:

Often the issues in these cases hinge on foreseeability. Sometimes a successful breached security case will involve a property owner who had previous warnings about the potential for danger on their premises. For instance, if ten mall shoppers had been mugged in the parking lot in the previous 30 days, the property owners would be on notice of an eleventh victim. If no steps are taken to decrease the likelihood of future violence and another person is victimized, the mall owners will probably be liable for negligent security.

This is not to say that a inadequate security claim will not be successful unless there have been previous instances of crime. For example, if a college with no record of campus violence fails to background check its employees and a campus security guard with a history of violence assaults a student, the college likely will be liable for damages because it did not take reasonable steps to ensure the security of its students.

Elsewhere on our website, we look at some of the Maryland appellate issues on the question of foreseeability in negligent security cases. The nutshell is that Maryland courts have been inconsistent in premises liability cases in making the call as to what risks of harm are foreseeable.

Perhaps the only thing worse than serious physical injury or being the victim of a criminal act is knowing that your situation could have been avoided. This is why negligent security lawsuits are so important: they are meant to compensate victims who should have never been victims.

We handle premises liability cases throughout Maryland. If you want to get more information on your claim, call our lawyers at 1-800-553-8082 or get a free Internet consultation.