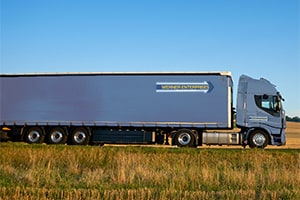 Sure, with so many vehicles on the road, every trucking company is responsible for its share of accidents. At a certain point, tractor-trailer crashes may result from the large quantity of rigs in use, rather than the quality of the drivers. But Werner's truck accidents may also be the result of more aggressive driving practices. Between April 2018 and April 2020 Werner truck drivers were involved in 25 fatal accidents and 291 accidents that resulted in serious injury.

In truth, despite its extreme statistics, Werner is not necessarily a bad company. Like any trucking organization, Werner is bound to hire a bad driver from time to time. And Werner is responsible for the pain, harms, and losses from the accidents caused by any driver under their employment. But Werner drivers, like the truck drivers working for any other company, are stressed by a larger transportation and system that demands fast deliveries, which can cause distraction and excess speeds. Consumers are pushing for more goods to be delivered both to their homes and to brick-and-mortar retail locations, and increasing demand consequently pushes trucking companies to put more drivers on the road. But regardless of the reason, if a Werner employee is at fault for a crash, Werner is liable for the resulting injuries and fatalities.

Why Werner Accident Cases Have a Higher Settlement Value

Because Werner trucks are bigger and heavier than passenger cars, they are capable of causing more damage. Werner claims adjusters, being used to handling the larger dollar amounts involved in tractor-trailer accident claims, can have a productive impact on settlement value.

The jury's lack of personal sympathies toward a big company like Werner can also help to raise settlement value. Although vehicle accident cases usually result in conflict over the precise settlement value of the injuries rather than a liability dispute, the defendant should be of no consequence to the jury's decision. But in reality, the identity of the defendant does make a difference. When a defendant is an individual person, such as a kind-looking grandmother, the jury is more likely to feel empathetic toward her and unconsciously decide on a smaller award. Conversely, a jury is unlikely to feel empathetic toward a large company like Werner, even if they have a positive perception of the company or its services. Therefore, the trial value of a personal injury claim is typically higher against Werner, and this higher trial value leads to a greater settlement value.

What Else is Different About a Claim Against Werner?

Even a lawyer who is accustomed to handling car accident cases may not necessarily be qualified to handle a tractor-trailer accident case against Werner. Trucking accidents involve many more variables, like state and federal regulations or data collection instruments, than the average car accident case. Commercial vehicles are equipped with modern electronic instruments that are designed to collect information about the rig's speed, airbag deployment, braking, and a variety of other data points at the time of a crash. This data can help ascertain whether Werner was at fault for the crash, as long as the attorney knows where to look and how to incorporate the data into the trial.

Sample Settlements and Verdicts Against Werner

Additionally, examples of settlements and verdicts against Werner are listed below. Although these cases are more limited in their usefulness to new claims against Werner, they can give you a feel for how the settlement value of a case can change depending on jurisdiction, the severity of injuries, and economic loss caused by those injuries or death.

Our law firm is based in Maryland. Our lawyers handle a lot of serious injury and wrongful death truck accident cases. Most of the Werner truck collision cases we see are in Maryland in the Baltimore-Washington area, but we handle significant injury cases throughout the entire country. If you have been harmed in an accident with a Werner truck and want to consider a lawsuit or a claim for an out-of-court settlement, call one of our lawyers at 800-553-8082 or click here for a free no obligation Internet consultation.