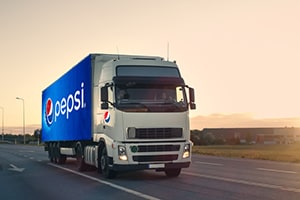 In the world of truck transportation, motor carriers are divided into two categories: for-hire and private. For-hire carriers, such as UPS, FedEx, Swift, J.B. Hunt, and Cowan are paid to carry cargo for other companies, whereas private carriers transport only their own cargo. Companies like PepsiCo, Wal-Mart, Giant, and Halliburton hire their own drivers to drive company-owned rigs, instead of paying a third-party contractor to haul their company's products.

Because private carriers typically treat their drivers better, with higher pay and greater benefits, it is possible that happier drivers are less likely to crash. But even with happier and more experienced employees, with so many trucks on the road, accidents are inevitable. In 2015 there were 415,000 police-reported crashes involving large trucks, 83,000 resulted in injury, and 3,598 were fatal. 166,415 of those crashes involved trucks from private fleets.

The truth is that private motor carriers are under an enormous amount of pressure. Because for-hire carriers are only in the business of truck transportation, for-hire drivers can point to the revenue they generate with their truck to prove their value to the company. Private carriers, however, will always see their drivers as an expense. Truck transportation, for a company like Pepsi, is not part of their main profitability. Pepsi makes its money by selling soft drinks, and although Pepsi needs trucks to transport their soft drinks to potential customers, the truck itself is a business expense. Therefore, Pepsi's drivers are under constant pressure to prove that they can do a better job than an outsourced for-hire company. As a result, private fleets are always measuring success, defining outcomes, and changing to become as efficient as possible. Sure, like any trucking company, private carriers have bad drivers who are prone to accidents. Sometimes, a private carrier like Pepsi will make a mistake in hiring a driver. But more often, private drivers are stressed by a system that demands speed and efficiency.

At the end of the day, if a Pepsi driver causes an accident, then Pepsi is liable for the damage caused by their driver. Since most truck accident lawsuits include allegations of injuries and death, the core of these claims is that the real fault lies with the driver. Whether their employer is a for-hire carrier like UPS or a private carrier like Pepsi, the company is responsible for the pain, harms, and losses resulting from truck accidents.

Why Private Truck Accident Cases Have a Higher Settlement Value

Since most car or truck accident cases do not involve a significant liability dispute, the real struggle is over the settlement value of the injuries. In theory, the identity of the defendant should make no difference to a jury, whose job is to determine the appropriate amount of money damages that would make the victim whole again. But in practice, the defendant does make a difference. Juries tend to feel empathetic toward individual people, and lawsuits against, say, a kindergarten teacher will tend to result in lesser jury awards. When suing a large company like Pepsi, however, fewer jurors will feel sympathetic toward the defendant. Consequently, the trial value of a personal injury claim will usually be higher with large companies like Pepsi, and this higher trial value results in a greater settlement value.

Larger settlement value can also result from the relative size of a rig. Because tractor-trailers are bigger and heavier than passenger cars, they can cause more damage. Claims adjustors for both private and for-hire motor carriers are accustomed to dealing with larger dollar amounts, which tends to have a productive impact on settlement value.

What Else is Different About Claims Against a Private Carrier?

Lawyers who regularly handle car accident cases are not always qualified to handle truck accident cases. Tractor-trailers are often equipped with certain accident-related data storage devices, requiring attorneys to have a specialized knowledge of these cases. Many cargo transport vehicles carry modern electronic sensors that can store information about speed, airbag deployment, braking, and many other data points that can help determine whether the truck driver was at fault for the crash. There are also many state and federal regulations that are different for private motor carriers than for-hire. Not just any car accident lawyers can navigate this tangle of data and regulation, but there is an arsenal of tools available to help victims if you know where they are and how to use them.

Our website has a host of tools designed to aid victims in understanding the possible settlement value of their claims. The most predictive measure is the settlement value for the same type of injury, but it may also be helpful to also look at the type of accident. For both of these variables, we provide statistics for the average trial or settlement value. Although limited in their application to new cases, samples of settlements and verdicts involving the same defendant may be worth a look. In very general and limited terms, these statistics will give you a sense of how settlement values can change based on the severity of injuries, the economic loss caused by injury or death, and jurisdiction.

Our law firm is based in Maryland. Most of the truck collision cases we handle are in the Baltimore-Washington area, but we handle significant injury cases throughout the entire country. If you have been harmed in an accident with a truck and want to consider a lawsuit or a claim for an out-of-court settlement, call one of our lawyers at 800-553-8082 or get a free no obligation Internet consultation.