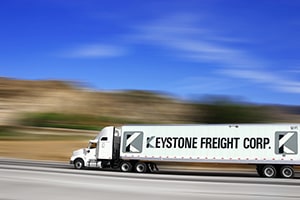 Keystone Freight Corp. is a motor carrier with a relatively small footprint, barely cracking the top 500 trucking companies with only 35.7 million in annual mileage. Keystone has seven hubs, including one in Baltimore, that span the United States. But Keystone is largely a local carrier, with routes usually sticking close-by its hub locations. Even with such low mileage, Keystone tractor-trailers have been involved in their fair share of crashes, resulting in 29 injuries and 3 fatalities in the past two years alone.

Unlike the larger for-hire carriers such as UPS, FedEx, Swift, Schneider, or J.B. Hunt, Keystone is a third-party logistics company. Meaning, Keystone provides outsourced logistics services by hiring individual owner/operators to move freight, rather than hiring people to drive trailers owned by the company. Many truck drivers aspire to one day own their own rig, giving them a sense of freedom and the ability to be their own boss. But owner/operators who choose to drive for companies like Keystone can run into many of the same problems they would have as a regular employee driver. At Keystone, for example, employees complain about the physical demand of the job. Reportedly, Keystone drivers must unload their trailer by hand, requiring a lot of heavy lifting.

Hiring owner/operators can also be risky for Keystone. Recent statistics from the Government Accountability Office (GAO) reveal a rising phenomenon of "chameleon carriers." Oftentimes, after a series of bad accidents or poor safety inspections an owner/operator will attempt to conceal his identity, changing the name of his company and applying to carry freight for a different organization. The Federal Motor Safety Carrier Administration (FMCSA) is unable to determine the total number of chameleon carriers already within the industry because of the massive amount of data they would have to go through. But the GAO, using FMCSA data, found an increasing number of potential chameleons - from 759 in 2005 to 1,136 in 2010. Of those possible chameleons, 18 percent were involved in severe crashes, compared with the 6 percent industry-wide crash rate. Even though these owner/operators are driving their own rigs, since Keystone is responsible for vetting drivers during the hiring process, Keystone is liable for any accidents their drivers cause.

Why Keystone Accident Cases Have a Higher Settlement Value

The real challenge in a Keystone tractor-trailer accident claim is in the determination of value for the injuries caused by the collision, not in assigning blame for who caused the accident to begin with. In cases like this, the defendant shouldn't have any impact on the outcome of the case. But in reality, the identity of the defendant can make a big difference. If a sweet old grandmother, for example, is sued for causing a car accident, the jury may be subconsciously affected by their sympathy toward the grandmother, and assign a lesser award. Even though it's the jury's job to find the right amount of money that would enable a victim to become healthy and whole again, regardless of the defendant, an empathetic defendant can have a negative impact on awards. Few people, however, feel any empathy for large, impersonal trucking companies with big pockets. Even if a juror respects Keystone and appreciates their services, the juror is unlikely to have strong feelings of sympathy toward Keystone that would affect the outcome of a trial.

Additionally, since tractor-trailers are heavier and can cause more damage than the average vehicle, Keystone claims adjusters are used to the greater damages and dollar amounts associated with rig accidents. Between jury bias and claims adjustor bias, the trial value for personal injury claims can be higher against a company like Keystone, which in turn leads to a higher settlement value.

What Else is Different About a Claim Against Keystone?

Although many lawyers handle car accident cases, it takes a lawyer with industry-specific knowledge to properly handle truck accident cases against Keystone. State and federal regulations, for example, are different for motor carriers than they are for passenger cars. Many tractor-trailers are required to carry specialized equipment that can detect and save data about speed, airbag deployment, braking, and a host of other data points from the time of a crash. If the attorney knows where to look, these data and regulations can be useful tools in settling your personal injury claim against Keystone.

Sample Settlements and Verdicts Against Keystone

Listed below, you will find several examples of verdicts and settlements against Keystone from past personal injury claims. These cases can help you find a better understanding for how settlement value can change based on jurisdiction, the severity of injuries, and the economic losses caused by those injuries or deaths. Our website also includes a number of tools that can be used to better predict the potential settlement range for a victim's future claim. The most useful metric is settlement value for the same type of injury, but looking at settlement values for similar types of accidents can also be helpful.

Obviously, what jumps off the page is how few cases Keystone is letting go to trial. Sure, it is a smaller trucking company but it is not that small. You also wonder whether the verdict that it took in 2009 did not change Ruan's thinking on whether it should roll the dice in wrongful death and catastrophic injury cases.

What is the Average Settlement Value for Keystone Freight Truck Accident Cases?

Do Keystone Freight Truck Drivers Have a Good Accident Rate?

Most truck drivers for Keystone Freight are independent operators and not company employees. This has significance in truck accident cases because if the driver is not a company employee he may have his own separate insurance and Keystone may not have direct liability.

How Much Insurance Do Keystone Freight Trucks Have?

All Keystone Freight trucks are covered by auto liability insurance policies with a limit of $1 million per accident.

Our law firm is based in Maryland. Most of the truck collision cases we handle are in the Baltimore-Washington area, but we handle significant injury cases throughout the entire country. If you have been harmed in an accident with a Keystone truck and want to consider a lawsuit or a claim for an out-of-court settlement, call one of our lawyers at 800-553-8082 or get a free NO OBLIGATION Internet consultation.