Extremely large commercial vehicles often need to make extremely wide turns. Can they be done safely? Absolutely. But trucks who are in a hurry, and have inexperienced or lazy drivers rarely take the safest route.

When wide turns are undertaken by large trucks, some of these guys do not do what they must to overcome their partially obstructed view that does not give a good look at adjacent lanes and oncoming traffic.

These turns often cause collisions that result in people getting hurt or killed. Some are directly in the line of fire. There are also secondary collisions caused by motorists trying to avoid these wide turns or pass a turning vehicle, who then collide with each other.

You can learn more about truck accident injury and death cases in Maryland and the details of who we pursue and maximize the value of these cases here.

Big vehicles are especially dangerous, mainly because trucks are so large and can initiate impact in so many different ways. An 18-wheeler can weigh over 80,000 pounds and measure over 60 feet long. A vehicle that big is often difficult to control and requires an enormous turning radius that creates significant blind spots. These large turns increase the likelihood of accidents and collisions.

Let's put this in a little context. While truck collisions only account for 1 in 8 traffic fatalities, out of the 500,000 truck accidents each year, 5,000 result in death. Those injured or killed are most often not the truck’s occupants but occupants of other motor vehicles, who account for up to 98 percent of trucking deaths.

Can wide turn truck accidents be prevented?  You bet they can.  Here are a few things that truck drivers must do:

What Types of Accidents Are Caused by Wide-Turning Trucks?

The following are common types of accidents caused by wide turning trucks:

How Might An Accident Of This Nature Occur in Real Life

Andrew is the driver and operator of a huge 18-wheel commercial truck that is almost 70 feet long and weighs nearly 100,000 pounds! Andrew is hauling a load up I-270N when he exits onto the local service road. He usually stays on the main highway until he reaches his exit but the traffic on this day is so heavy that he takes a less traveled route. Coming up to the first intersection on the service road, he realizes he needs to make a right turn to reach his destination.

The two-lane service road makes it difficult for Andrew to maneuver a right turn, but he decides to give it a go. He pulls out into the intersection and makes a wide sweeping right turn. As he turns, the front wheels of the tuck are in the lane of oncoming traffic and the back wheels are in his original lane of traffic. He has some difficulty with the turn and has to reverse the truck and try it again; all while the lane of oncoming traffic is fully obstructed. Traveling motorists sit at the intersection and impatiently honk their horns as Andrew tries again to complete the wide turn. Andrew, feeling pressured, puts the truck in reverse one more time to get some more room.

Andrew, so focused on the difficult maneuver he is performing, fails to look behind him when reversing. He collides with and crushes a small Fiat that is sitting behind him, waiting for him to turn. Inside the Fiat sits Nadine who broke both of her legs. The challenge of the turn distracted Andrew from the road and caused him to be negligent or careless in reversing the truck. This negligence caused Nadine to be seriously injured.

Sample Settlements and Verdicts in These Wide Turn Cases 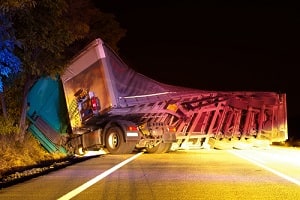 The team of attorneys and professionals at Miller & Zois has a proven track record of success when it comes to representing victims of serious truck accidents. We fight with everything in our power to get you as much - bluntly - as much money as we possibly can. That is what the justice system gives out: money. It is our job to go out and get that for our clients.

If you or someone you care for has been injured in a crash caused by a wide-turning truck or other motor vehicle crash claim, call us immediately at 800-553-8082 or get a free case evaluation online.