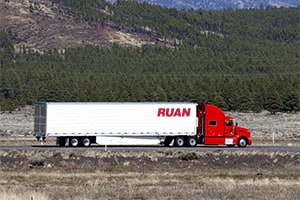 Ruan Transportation Management, only 69th in annual trucking mileage, is ranked by Transportation Topics as the 25th best transportation company, based on annual trends in revenue and number of employees. Though Ruan can't quite compare to the biggest trucking companies, like UPS, FexEx, Swift, or Schneider, it is categorized as a medium-to-large sized carrier with 1,752 vehicles in its fleet. Regardless of its market share, any company with so many vehicles on the road is bound to cause a few accidents.

Overall, Ruan is a good company. It was founded in 1932 on the depression era values of integrity, hard work, innovation, quality customer service, and compassion. And for the most part, Ruan seems to live up to its values, receiving positive reviews from employees who appreciate working for a family-focused employer. But any trucking company, no matter its moral code, will inevitably make a few mistakes. Whether they hire the occasional bad driver, neglect to perform proper truck maintenance, or simply succumb to poor road conditions, Ruan Transportation Management is responsible for any collision caused by their vehicles and drivers.

Why Ruan Accident Cases Have a Higher Settlement Value

Cases involving Ruan tractor-trailers tend to revolve around settlement disputes - arguing over the exact value of the injuries sustained during an accident rather than determining who caused the accident. When liability isn't a factor, the identity of the defendant should hold no bearing over the outcome of the case. But the jury, as empathetic human beings, is understandably more likely to feel sympathetic toward an individual person rather than a big faceless company. For example, suing a sweet-looking grandmother would most likely result in a lower settlement value than suing a company like Ruan. Even people who respect Ruan are unlikely to feel any sympathy toward such a big, lucrative company. Therefore, trial values of personal injury claims are often higher against companies like Ruan, and this higher trial value indicates a higher settlement value.

As a trucking company, Ruan's claims adjusters are accustomed to dealing with greater damages with larger dollar amounts than the average car insurers. Since tractor-trailers are much bigger and heavier than other vehicles, they cause more damage and devastation when they get into an accident. As such, the bias of Ruan claims adjusters can have a positive impact on settlement value.

What Else is Different About a Claim Against Ruan?

Ruan, like any trucking company, is required to follow a whole host of state and federal regulations for tractor-trailers or any kind of specialized equipment they might be carrying. Due to the specificity of the law regarding trucking, not every car accident lawyer is equipped to handle a case against Ruan. There are data-collection instruments onboard most rigs that collect and save data about their speed, airbag deployment, braking, and other data points from the time of an accident. Between this electronic equipment and the trucking-specific regulations, there are plenty of useful tools and data to use in a collision case against Ruan, if your attorney knows where to find them.

Sample Settlements and Verdicts Against Ruan

Although they may be limited in their ability to predict the value of your claim, these examples can help to broaden your understanding of how the settlement value can change based on jurisdiction, severity of injury, or economic loss caused by injury or death.

Truck companies cause a lot of wrongful death and catastrophic injury lawsuits. These verdicts, albeit a limited sampling size, suggest that Ruan is no looking to try the most serious injury cases. We did not find any verdicts involving Ruan where the harm caused was death or catastrophic injury. Obviously, these verdict also show that Ruan is settling most of these claims before they ever see a jury. This is typical of most trucking companies.

What is the Average Settlement in Truck Accident Cases Against Ruan Transportation?

An average settlement in a serious truck accident case against Ruan Transportation is around $70,000 to $105,000. The average jury verdict amount in accident cases against large commercial trucking companies is $510,000. The potential value of a specific case against Ruan will depend on the severity of the plaintiff’s physical injuries.

Do Ruan Transportation Truck Drivers Have a Bad Accident Record?

Does Ruan Use Independent Contractor Drivers?

Yes. Some Ruan Transportation truck drivers are company employees. However, Ruan also uses “independent owner operators” to fill out its driver needs. These drivers are not company employees, but rather independent contractors who own their own rig and work for Ruan on a full or regular basis. If you get in an accident with one of these drivers, Ruan may not have direct liability.

Our law firm is based in Maryland. Most of the truck collision cases we handle are in the Baltimore-Washington area, but we handle significant injury cases throughout the entire country. If you have been harmed in an accident with a Ruan truck and want to consider a lawsuit or a claim for an out-of-court settlement, call one of our lawyers at 800-553-8082 or click here for a free no obligation Internet consultation.