Negligent hiring claims are made in truck accident cases when independent trucking companies cause serious injury and death but there is not enough insurance to cover the loss.
Finding Money in Truck Accident Cases

Truck accident cases involving serious injury or wrongful death are often about insurance coverage. Trucking companies are getting advice from lawyers to set-up as many different hurdles as possible to shield themselves from liability.

There is a good reason for the effort. In general, the average settlement in a negligent hiring case is over $1.6 million.

Insurance companies and sometimes the trucking companies themselves are motivated to prevent you from finding every avenue to get your client money damages that support her claim. 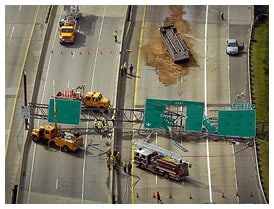 Too many trucking companies hire inexperienced drivers who don't know how to handle these big rig trucks and have never gotten defensive driving training to understand proper accident avoidance techniques.  These drivers need to make split-second decisions in emergency situations.  If they do not have this kind of training, people are going to get hurt and killed.

Getting Around the Law and How to Stop Them

It is common knowledge in the trucking industry that there is now and has been an acute shortage of truck drivers.  Bad truck drivers are, however, available. And they are available on the cheap.

Even for good companies, when risk is removed from the calculus, you focus on doing your job well by cutting costs. A truck crash that kills a child becomes more attenuated. From a public safety standpoint, this puts all of us at risk.

The Law on Negligent Hiring

Truck accident lawyers have an opportunity to be heroes - not that anyone is going to see it that way  - and hold the contracting company's feet to the fire. How? The Second Restatement of Torts § 411 provides that "an employer is subject to liability for physical harm to third persons caused by his failure to exercise reasonable care to employ a competent and careful contractor . . . to perform work which will involve a risk of physical harm unless it is skillfully and carefully done."

What does that mean? Let's say A, a builder, employs B, a teamster, to haul material through the streets from a nearby railway station to the place where A is building a house. A knows that B's trucks are old and of poor condition and that B habitually employs inexperienced and inattentive drivers. C is run over by a truck carrying A's material and driven by one of B's employees. A is subject to liability to C if the accident is due either to the dangerous condition of the truck or the inexperience or inattention of the driver.

Did you like that example? It is stolen from Comment D, Illustration #5 from §411. It is an excellent example of negligent hiring that plaintiffs' truck accident attorneys need to focus on in truck accident cases.

Also, keep in mind that obviously negligent hiring is not limited to independent contractor claims. The classic example is the employee who injures another on his way to or from work. Liability for negligent hiring applies regardless of whether the employee was acting within the course of employment during the commission of the tort or not.

Ultimately, when a lawyer picks up a file, it's hard to tell whether a negligent hiring claim is viable. What you need is some evidence - something that clears a motion to dismiss - to conduct discovery. But if you do see smoke, there is a disproportionate amount of fire.

Additional Paths to Find Coverage and Money and Assets in Truck Accidents
Practice Areas
Client Reviews
★★★★★
They quite literally worked as hard as if not harder than the doctors to save our lives. Terry Waldron
★★★★★
Ron helped me find a clear path that ended with my foot healing and a settlement that was much more than I hope for. Aaron Johnson
★★★★★
Hopefully I won't need it again but if I do, I have definitely found my lawyer for life and I would definitely recommend this office to anyone! Bridget Stevens
★★★★★
The last case I referred to them settled for $1.2 million. John Selinger
★★★★★
I am so grateful that I was lucky to pick Miller & Zois. Maggie Lauer
★★★★★
The entire team from the intake Samantha to the lawyer himself (Ron Miller) has been really approachable. Suzette Allen
★★★★★
The case settled and I got a lot more money than I expected. Ron even fought to reduce how much I owed in medical bills so I could get an even larger settlement. Nchedo Idahosa
View More
Submit a Law Firm Client Review
Our Firm ›
Attorneys ›
Medical Malpractice ›
Personal Injury Practice ›
Communities Served ›
Injury Victim Help Center ›
Plaintiff Attorney Center ›
Insurance Company Insight ›