Allegany County is a very rural county of about 75,000 people located in northwestern part of Maryland (our panhandle).  Most Marylanders don't know where Allegany is but its biggest city, Cumberland, has a lot to offer.  The county is bordered by Pensylvania and West Virginia.

About 50 circuit court personal injury cases get filed in Cumberland every year. That figure has remained pretty steady over the years.  (There were 54 in 2017, 35 of which were car accident lawsuits.)

A good number of malpractice lawsuits are filed in Cumberland every year. But the lion's share of those cases are filed by prisoners at the Cumberland Correctional Institution, and they typically do not get very far.

Allegany County has been a historically conservative jurisdiction for auto and truck accident and medical malpractice lawyers handling personal injury cases at trial. If you are a lawyer trying a car accident soft tissue injury case in front of an Allegany County jury... well, you are likely to have a terrible time. 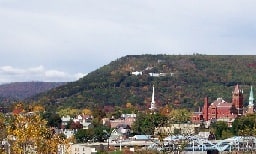 But Allegany County juries will award substantial damages in medical malpractice and accident cases if the cases are serious.   You can look at these jurors like Wal-Mart shoppers.  They are willing to pay victims. But they want value for their dollar.  They want worthy victims before the open up their checkbooks.  In personal injury cases, value is defined a deserving plaintiff who has truly suffered.

Our lawyers are not located in Cumberland. But our lawyers handle serious - and only serious - car accident, products liability and medical malpractice in every county in Maryland, including Cumberland. (Please review our lawyers' biographies and client testimonials.)

If you have been injured in an accident or by medical malpractice in or around Cumberland/Allegany County, call us immediately at 800-553-8082 or select here for a free consultation.

Other Jurisdictions
More Allegany County
Practice Areas
Client Reviews
★★★★★
They quite literally worked as hard as if not harder than the doctors to save our lives. Terry Waldron
★★★★★
Ron helped me find a clear path that ended with my foot healing and a settlement that was much more than I hope for. Aaron Johnson
★★★★★
Hopefully I won't need it again but if I do, I have definitely found my lawyer for life and I would definitely recommend this office to anyone! Bridget Stevens
★★★★★
The last case I referred to them settled for $1.2 million. John Selinger
★★★★★
I am so grateful that I was lucky to pick Miller & Zois. Maggie Lauer
★★★★★
The entire team from the intake Samantha to the lawyer himself (Ron Miller) has been really approachable. Suzette Allen
★★★★★
The case settled and I got a lot more money than I expected. Ron even fought to reduce how much I owed in medical bills so I could get an even larger settlement. Nchedo Idahosa
View More
Submit a Law Firm Client Review
Our Firm ›
Attorneys ›
Medical Malpractice ›
Personal Injury Practice ›
Communities Served ›
Injury Victim Help Center ›
Plaintiff Attorney Center ›
Insurance Company Insight ›