Baltimore is a pedestrian town. In recent years, there are times I could run the same mile much faster than sitting in traffic. If you are driving towards Harbor East during rush hour, you could crawl down Pratt Street and get there faster.

Pedestrian death in Maryland are on the rise.  The victim is a pedestrian in one in five fatal motor accidents in Maryland. Many of these deaths occur in Baltimore, the "pedestrian capital" of Maryland. In 2018, about half of the 133 pedestrians and six bicyclists deaths in Maryland were in the Baltimore region.

There are very few experiences as terrifying as a car coming at you as a pedestrian. We have all had that fear at one point of thinking a motor vehicle might hit us. It is terrifying. Cars outweigh human beings by hundreds of pounds and when traveling at high speeds may cause serious injuries to unsuspecting pedestrians. These accidents can happen in a variety of ways, but one common theme to remember is that the pedestrian almost always has the right of way.

So, if you are a pedestrian and you have been struck by a vehicle whether in the crosswalk, sidewalk or elsewhere, the odds are that it was the driver’s fault. The following article will cover when and how an injured pedestrian can bring a lawsuit against an accident-causing driver.

How Dangerous and Common Are Pedestrian Accidents?

Pedestrian/motor vehicle accidents are both dangerous and common. The NHTSA reports that about 4,500 pedestrians are killed every year.  But things are getting worse.  The 2019 data is not in yet but 2018 was a brutal year for pedestrians: 6,227 deaths.  These deaths, not surprisingly, are much more common in urban areas like Baltimore, making up almost 75% of pedestrian accidents.

Also not surprising is that the majority of these accidents occur between 8:00 p.m. and 11:59 p.m. when the sun is down and visibility is low. Sadly, many involve children under 10 who are walking to and from school and people over 64.  (The driver and the victim are usually male.) Almost every year, the total cost of death and injury among  pedestrians totals $5.2 billion. Pedestrian accidents are a major problem in terms of cost and human suffering. 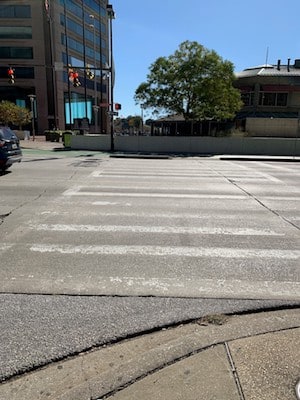 If you or one of your loved ones were involved in a Baltimore pedestrian accident, we may be able to help you get the compensation you deserve. We fight relentlessly to get you as much money as possible for what you have been through. Call us at 800-553-8082 or you can get a free case evaluation online.

More Pedestrian Accident Information
Police Chase Injuries
Practice Areas
Client Reviews
★★★★★
They quite literally worked as hard as if not harder than the doctors to save our lives. Terry Waldron
★★★★★
Ron helped me find a clear path that ended with my foot healing and a settlement that was much more than I hope for. Aaron Johnson
★★★★★
Hopefully I won't need it again but if I do, I have definitely found my lawyer for life and I would definitely recommend this office to anyone! Bridget Stevens
★★★★★
The last case I referred to them settled for $1.2 million. John Selinger
★★★★★
I am so grateful that I was lucky to pick Miller & Zois. Maggie Lauer
★★★★★
The entire team from the intake Samantha to the lawyer himself (Ron Miller) has been really approachable. Suzette Allen
★★★★★
The case settled and I got a lot more money than I expected. Ron even fought to reduce how much I owed in medical bills so I could get an even larger settlement. Nchedo Idahosa
View More
Submit a Law Firm Client Review
Our Firm ›
Attorneys ›
Medical Malpractice ›
Personal Injury Practice ›
Communities Served ›
Injury Victim Help Center ›
Plaintiff Attorney Center ›
Insurance Company Insight ›