Passing on the Right - Legal or Ilegal? 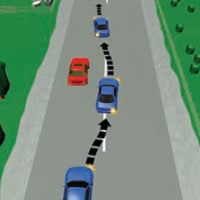 Whether it's legal to pass on the right in Maryland depends on the situation. The Maryland law set forth below, and is similar to what many states have, includes the ultimate judgment call: "when it is safe to do so."

What is safe and what is insanely dangerous depends on the type of road the driver is on and the situation at hand. Unlike many other states, Maryland does not get into specific parameters of when you can pass on the right. Instead, it demands reasonableness which is a very broad standard.

You can also overtake the lead vehicle on the shoulder on a left-hand turn, again if the circumstances make it safe to do so. You need to see what is there to be seen in front of you and make a determination if it is entirely safe.

Maryland Law on Passing on the Right

Let's get granular and look at the details of Maryland law on passing on the right. It starts with Section 21-303 of the Maryland Transportation Article titled General Rules Governing Overtaking and Passing Vehicles. It states:

Subsection (d) is the key. But it begs the question of when it is lawful to pass on the right. This question is answered by Section 21-304 of the Maryland Transportation Article titled When Passing on Right is Permitted states:

What Does it Mean to "Pass on the Right?"

Passing on the right means exactly what you would think. It is overtaking another vehicle from the right side. This can be either an incredibly unsafe or perfectly acceptable practice, depending on the context.

In most cases, it is much safer to pass a slower car in the left lane. But that is the problem with bright-line rules. They are exceptions and instances where it may be better to pass a driver on their right side. The left lane is usually reserved for passing cars and faster moving traffic, but as you have probably experienced, occasionally there are drivers in that lane moving slower than expected.

In this kind of scenario, a person may try to overtake a driver from the right, meaning they move over to the right-hand lane to pass the car and then return to the left lane.

Is it Illegal to Pass on the Right?

Whether it is legal to pass on the right depends upon the state. There's a reason why most states prefer you pass on the left side. It's generally regarded as the safer option, as drivers have a wider field of vision on their left side, there are vehicles stopped on the right shoulder, and the steering wheel is on the left (which makes massing on the right more difficult). Of course, most exit ramps are placed on the right side of the highway which is another important factor.

Can You Pass on the Right on a Highway?

Generally, it is legal to pass on the right on a two-lane or more highway in Maryland. But on highways, it's even more important to make a smart decision when trying to pass a car because of the increased speed limit.

Is it Dangerous to Pass on the Right?

The simple answer to this question is yes, it is almost always more dangerous to pass on the right. You have a larger blind spot on your right side, making it much easier to accidentally merge onto a car while trying to move into the right lane. Most exit ramps are also placed on the right, meaning traffic is usually merging onto the highway from the far right lane. Many people are not even aware that you do have the ability to pass on the right, so they might not be paying a lot of attention to the person on their left, increasing your risk of a collision. Again, the true answer is more complication. It is usually, but not always, more dangerous to pass on the left. But there are situational exceptions.

If you intend to pass someone on the right and you see a car in the lane next to you, you should not try to merge over until you have made direct eye contact with the driver and made them aware of your presence. Of course, you should always use your blinker before changing lanes as well.

The primary battlefield on this jury instruction is section 21-304(b) regarding what constitutes “safe to do so.” We recently addressed this issue in an appellate brief in Baltimore City Circuit Court.

Ultimately, this is something of an eye of the beholder jury instruction. It does not perscribe clear instructions to drivers in specific situations. There is often dispute about passing on the right using part or all of the road's shoulder. This law and the jury instruction that comes with it does not provide clear answers, leaving it to the jury to decide what is reasonable.