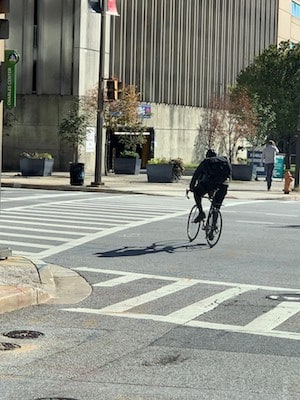 Our Maryland pedestrian injury lawyers handle claims for victims who have been hit by a car or other motor vehicle.  Our attorneys have earned millions of dollars for victims in settlements and verdicts in pedestrian accident claims.

Every day in Maryland, pedestrians who are crossing in a crosswalk, jogging down the street, walking through a parking lot, and even walking on the sidewalk are stuck by cars or trucks. Obviously, a pedestrian does not have the luxury of a seat belt, the steel protection of a car, or even the luxury of a motorcycle helmet.

There are several dangerous areas where pedestrians are at higher risk: near the confusion of a construction site, while crossing the street (especially when there is no crosswalk) while walking alongside a road (and not on a sidewalk).

Some professions, activities, and demographics that are high risk for pedestrian impact injuries include utility workers, landscapers, police officers, garbage collectors, runners, the elderly (because it takes them longer to cross the street, and they are sometimes less able to evade negligent drivers) and children.

Maryland is a particularly dangerous terrain for pedestrians. For such a small state, Maryland is the 7th riskiest state to be a pedestrian.

Contrary to popular belief, a police report is typically not evidence in a pedestrian accident lawsuit. The report, which may have a police officer's opinion about whether the pedestrian was at fault in the collision, is usually inadmissible in court.

This is particularly the case if the pedestrian is struck in Maryland while crossing the street. The defense will be that the pedestrian ambled across against the signal, or crossed outside of a crosswalk. 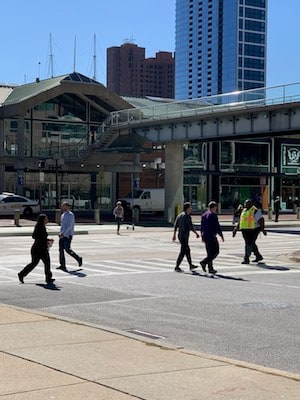 Defense lawyers in Maryland pedestrian accidents often contend that the pedestrian was a jaywalker and is contributorily negligent. In Maryland, a victim who is even 1% negligent is not allowed to recover in a civil lawsuit.

Defense lawyers pull out all of the stops and try to convince a jury that the pedestrian was distracted (using a cell phone or MP3 player) Often, a good, quick investigation after the crash can destroy these defenses.

If the pedestrian does not have automobile insurance and does not live in a household with a family member who has uninsured/underinsured coverage, then the pedestrian can recover from the Maryland Automobile Insurance Fund's (MAIF) Unsatisfied Claim and Judgment (UCJ) division. MAIF may be responsible for paying up to $30,000 for pedestrian accidents where the negligent driver is uninsured or cannot be located.

Pedestrian accidents are among the most serious motor tort accident cases we have, along with truck accident cases. They make-up of 9% of auto tort cases and probably an even larger percentage of Miller & Zois' cases.

Below are Maryland settlements and verdicts in pedestrian accident cases. Many of these are death cases which are not uncommon: 23% of vehicular accident cases are wrongful death claims.

These Maryland verdicts and settlement payouts are presented to give you a better idea of the value of pedestrian accident cases. But, we have to be honest about the limitations of this kind of data. There are too many variables to compare one pedestrian injury accident case to another to assume that if the cases are similar, they have a similar value. One case just cannot predict another.

Also, our pedestrian injury lawyers have many cases we cannot describe. Two "trucking accident pedestrian on the side of road" cases that settled into the millions with confidentiality clauses some to mind quickly.

Our attorneys provide sample settlements both to victims and fellow plaintiffs pedestrian injury lawyers an opportunity to gauge the value of these cases and to demonstrate our experience in handling pedestrian crash claims.

But the utility of applying a few example case resolutions to your individual case is, of course, limited. The outcome of one case cannot accurately predict the result of another claim. Every case is going to be valued on a host of different factors that may or may not be included in these brief verdict summaries.

Maryland’s rules of the road regarding pedestrians are outlined in Subtitle 5 of the Transportation Article in the Maryland Code. These rules, and the case law interpreting them, are the basis for determining fault in pedestrian accident cases.

The Transportation Article defines “pedestrian” as “an individual afoot.” Md. Code Ann., Trans. § 11-145. There are 2 very simple elements to this definition: “traveling” and “on foot.” A pedestrian is any person: (a) “traveling” on or near a public roadway; and (b) “on foot” as opposed to in some type of “vehicle.” A person sitting stationary on the side of the road is not “traveling” and, therefore, would not be a pedestrian.

A traveler on the highway is also not considered a pedestrian if they are operating any type of “vehicle” as opposed to walking on foot. A “vehicle” is defined very broadly to include any device used for transportation (with or without a motor).

Specifically, the term “vehicle” has been held to include bicycles, skateboards, and even sleds. So a teenager riding a skateboard on the side of the road is operating a vehicle and not a “pedestrian.” Wooldrige v. Price, 184 Md. App. 451 (2009).

Pedestrians also include highway construction workers, police officers, first responders, and others who are “afoot” on the highway for work purposes rather than travel.

However, the courts have repeatedly held that police officers and road workers may not be subject to the same standard of care as an ordinary pedestrian. These “special status” pedestrians are not expected to exercise the same level of awareness when performing their duties. Braswell v. Burrus, 13 Md. App. 513 (1971).

In a 2019 case, the Maryland Court of Special appeals made it clear that a “pedestrian” can be anyone on foot even if they are not on the road but “near” the road. In Postma v. Lopez (Unreported 2019) the COSA held that an individual who was clearing snow on a driveway next to the road was a “pedestrian” under Maryland law.

Individuals riding bicycles on the roadways are not “afoot” so they are not considered “pedestrians.” Bicyclists are subject to the rules of the road that are applicable to vehicles. However, bicyclists are also subject to specific rules and restrictions.

Specifically, bicycles are required to stay on the far right side of the road and are not permitted on roads where the speed limit exceeds 50 mph. The rules for bicycles are set forth in Section 21, Title 12 of the Transportation Article.

(B) Pedestrians on Roadways

Pedestrians are always obligated to walk on a sidewalk or walkway on the side of the road whenever one is available. If a sidewalk is not available, pedestrians are supposed to walk on the left-hand side of the road (facing traffic) and as to the side as possible. Failure to follow these rules does not automatically constitute contributory negligence. See, e.g., Whitt v. Dynan, 20 Md. App. 148 (1974) (pedestrian walking on the right side with back to traffic when struck was held not to be contributorily negligent).

A “crosswalk” under Maryland law can be marked or implied (unmarked). Marked crosswalks are clearly painted onto the street with white crossing lines. An implied or unmarked crosswalk will exist at any intersection of 2 or more roads where there are sidewalks. The key here is the presence of sidewalks. If there are sidewalks on the road there will be an implied crosswalk at all intersections. If no sidewalks exist there is no implied crosswalk. A “sidewalk” can be any walkway on the side of the road intended for pedestrian use whether paved or unpaved.

(ii) Outside of Crosswalks

Under Maryland law, when a pedestrian crosses a road outside of a marked or implied crosswalk, they will almost always be guilty of contributory negligence and barred from recovery. Even if the pedestrian claims that they did not see the vehicle approaching before they cross, the courts will usually reject “reject this testimony as unworthy of consideration.” See, e.g., Smith v. Warbasse, 71 Md. App. 625 (1987). Drivers who hit pedestrians outside of crosswalks will only be liable if they are egregiously negligent or there are special circumstances. For instance, in Cohen v. Rubin, 55 Md. App. 83 (1983) the driver was intoxicated when he hit a 13-year-old after his passenger warned him to watch out.

Recent case law has established that occupants of vehicles that become disabled or get in an accident will be considered pedestrians if they remain on the road or the side of the road while inspecting their vehicle.

In Wright v. Mohler, 2019 U.S. Dist. LEXIS 136980 (D. Md. 2020), a teenager who had been drinking disabled his car after running over a curb. He remained on the side of the car partially in the roadway looking at the damage and not looking out for oncoming traffic when he was struck by the defendant. The Court held that the plaintiff was a “pedestrian” under Maryland law and that he was contributorily negligent because as a pedestrian he had a duty to get out of the road and keep an eye out for oncoming traffic.

If you have been injured in a serious pedestrian accident in Maryland, call us at 1.800.553.8082, or click here for a free consultation/case evaluation.

More Pedestrian Accident Information
Practice Areas
Client Reviews
★★★★★
They quite literally worked as hard as if not harder than the doctors to save our lives. Terry Waldron
★★★★★
Ron helped me find a clear path that ended with my foot healing and a settlement that was much more than I hope for. Aaron Johnson
★★★★★
Hopefully I won't need it again but if I do, I have definitely found my lawyer for life and I would definitely recommend this office to anyone! Bridget Stevens
★★★★★
The last case I referred to them settled for $1.2 million. John Selinger
★★★★★
I am so grateful that I was lucky to pick Miller & Zois. Maggie Lauer
★★★★★
The entire team from the intake Samantha to the lawyer himself (Ron Miller) has been really approachable. Suzette Allen
★★★★★
The case settled and I got a lot more money than I expected. Ron even fought to reduce how much I owed in medical bills so I could get an even larger settlement. Nchedo Idahosa
View More
Submit a Law Firm Client Review
Our Firm ›
Attorneys ›
Medical Malpractice ›
Personal Injury Practice ›
Communities Served ›
Injury Victim Help Center ›
Plaintiff Attorney Center ›
Insurance Company Insight ›