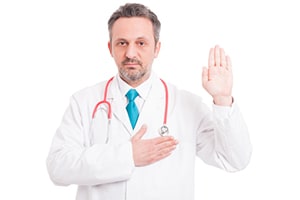 Below is a sample motion to compel an expert's personal financial records to determine how much of his income is derived from forensic work.

We do not attempt to get financial records on every expert who is slated to testify against us at trial. But there are some defense experts who are claiming they do not make 20% of their income from testifying who clearly are making far more. (Plaintiffs' lawyers have these same experts but we try to steer clear of them.)

The reality is that the law in Maryland and in most states is that the experts cannot force us to take them at their word for how much money they make doing forensic work. We are entitled to the documents. Defense lawyers are often under the impression that they can just ignore this issue and tell their experts they can ignore it. So we are often forced to file a motion to compel like this one seeking personal financial information and a variety information on many other cases in which the doctor has served as an expert witness.

IN THE CIRCUIT COURT FOR BALTIMORE CITY

Plaintiffs Anne M. Evans, Individually and as Personal Representative of the Estate of Dorothy Monroe, Mary Keenan, and Henry W. Monroe Jr., by and through their attorneys, Justin P. Zuber, Rodney M. Gaston, and Miller & Zois, LLC, hereby moves this Court to compel Defense expert Paul Taylor, M.D. to produce his 2013, 2014, and 2015 federal income tax returns and 1099 forms, and in support thereof states as follows:

Plaintiffs incorporate by reference herein their Motion to Strike Paul Taylor, M.D. as a witness in this case which is bring filed contemporaneously with this motion.

On November 4, 2016, Defense expert Paul Taylor appeared for his deposition. The Notices of Deposition (July 21, 2017 and October 4, 2017) required Dr. Taylor to produce financial documents. The October 21, 2016 deposition as actually cancelled at the last minute by Dr. Taylor and was rescheduled for November 14, 2017. Prior to Dr. Taylor's deposition, defense counsel contacted Plaintiffs' counsel via email and objected to Dr. Taylor producing his income tax records and unredacted 1099 forms.

After several emails between counsel, the parties were unable to reach an agreement regarding the documents which Dr. Taylor was required to produce and the deposition went forward. Plaintiffs' counsel agreed to maintain confidentiality over any income documents which were actually produced by Dr. Taylor. During the deposition, Dr. Taylor produced redacted 1099 forms wherein the payor names were erased from the forms preventing the Plaintiffs from obtaining the identity of the person and entities who paid Dr. Taylor monies to testify as a professional witness in medical malpractice cases. Dr. Taylor flat out refused to produce his income tax records for 2013, 2014, 2015, and 2016. Absent the income tax records and unredacted 1099 forms, the Plaintiffs will be unable to adequately cross-examine Dr. Taylor and challenge his ability to be qualified as an expert witness under C. J. P. 3-2A-04(b).

WHEREFORE: Plaintiffs respectfully requests this Honorable Court grant Plaintiffs' Motion to Compel Dr. Taylor to produce his federal income tax returns and unredacted 1099 forms for the years 2013, 2014, 2015, and 2016. The Plaintiffs agree to abide by any confidentially provisions pertaining to these records imposed by the court pursuant to Falik v Hornage 413 Md. 163, (2010).

I, Justin P. Zuber hereby certify that I made good-faith attempts to resolve the pending discovery dispute with defense counsel Daniel Christie via numerous emails in the weeks preceding Dr. Taylor's November 4, 2016 deposition, and that we were able to agree on a confidentiality provision for the records to be produced by Dr. Taylor; however, we were unable to agree on the documents Dr. Taylor was required to produce at his deposition and the parties are unable to resolve this discovery.

The case reference in the motion, Falik v. Hornage, is a Miller & Zois case that we won on appeal. Another key case is Wrobleski v. de Lara, 353 Md. 509 (1999). The issue before the Maryland Court of Appeals in that was the propriety of the cross-examination of an expert witness at trial as to the amount the expert had earned from forensic work. You are not going to get this type of discovery from a court if you cannot use it at that.

The Maryland high court found that an inquiry as to whether a witness earned a significant amount of income from forensic work and, thus, a "professional witness", is permitted. If so, the inquiry is permitted to expand to the amount of income derived from such forensic services and the approximate portion of the expert's total income devoted to such services. The issue in Wrobleski did not involve discovery of the expert's business, financial and tax records, however, the Court, anticipating such circumstances, held:

[W]e do not intend by our decision today to authorize the harassment of expert witnesses through a wholesale rummaging of their personal and financial records under the guise of seeking impeachment evidence. The allowance of the permitted inquiry, both at the discovery and trial stages, should be tightly controlled by the trial court and limited to its purpose, and not permitted to expand into an unnecessary exposure of matters and data that are personal to the witness and have no real relevance to the credibility of his or her testimony.

What Falik did was crystalize the parameters of where that line should be drawn between "wholesale rummaging" and the search for legitimate evidence of the expert's financial bias.

More Malpractice Trial Preparation Materials
Practice Areas
Client Reviews
★★★★★
They quite literally worked as hard as if not harder than the doctors to save our lives. Terry Waldron
★★★★★
Ron helped me find a clear path that ended with my foot healing and a settlement that was much more than I hope for. Aaron Johnson
★★★★★
Hopefully I won't need it again but if I do, I have definitely found my lawyer for life and I would definitely recommend this office to anyone! Bridget Stevens
★★★★★
The last case I referred to them settled for $1.2 million. John Selinger
★★★★★
I am so grateful that I was lucky to pick Miller & Zois. Maggie Lauer
★★★★★
The entire team from the intake Samantha to the lawyer himself (Ron Miller) has been really approachable. Suzette Allen
★★★★★
The case settled and I got a lot more money than I expected. Ron even fought to reduce how much I owed in medical bills so I could get an even larger settlement. Nchedo Idahosa
View More
Submit a Law Firm Client Review
Our Firm ›
Attorneys ›
Medical Malpractice ›
Personal Injury Practice ›
Communities Served ›
Injury Victim Help Center ›
Plaintiff Attorney Center ›
Insurance Company Insight ›