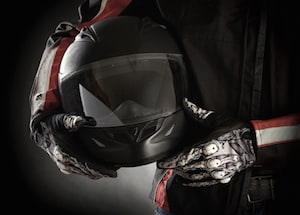 Helmet laws frustrate some motorcyclists in Maryland.  It is easy to understand why. But there is a reason for this loss of freedom to choose. World Health Organization tells us that wearing a motorcycle helmet is the single most effective way to reduce the chance of serious injury or death in motorcycle accidents.

The stats do not lie. Wearing a helmet reduces the risk of serious injury by approximately 70%, while the risk of death is reduced by approximately 40%. Not to forget, helmet use decreases the cost of healthcare substantially, meaning that society benefits as a whole from motorcyclists wearing helmets. Countries across the world and most USA states have realized this and figured that passing mandatory helmet laws is a no-brainer (and a brain-saver). Maryland is no exception.

Section 21-1306 of the Transportation Article of the MD Code requires that all motorcyclists operating a motorcycle wear a helmet that conforms to the standards set out by the Motor Vehicle Administration. Further, eye protection is required unless the motorcycle has a windshield.

The law gives the Administrator of the MVA wide discretion in classifying, approving, and disproving the type of helmets that are permitted to be worn by riders, but also compels him/her to publish a list of the approved helmets for use in Maryland. But, as we discuss later in this article, you should be fine  if you wear a helmet that is approved by the Federal Department of Transportation (DOT).

Maryland’s administration regulations, found in COMAR 11.13.05.02, elaborate on this law. This regulation makes clear that the Federal Motor Vehicle Safety Standard (FMVSS) 218, Motorcycle Helmets, 49 CFR §571.218 (1991) is incorporated in the Maryland law as the minimum standard for helmets required to be worn by operators and passengers on motorcycles in accordance with the requirements of Transportation Article, §21-1306, Annotated Code of Maryland.

Believe it or not, it is technically a violation of COMAR to sell, offer for sale, lend, or even borrow a helmet that is not approved by the MVA (once again, DOT-approved helmets are likely fine). It is also a violation to ride around with your chinstrap unfastened, because the regulations require that a rider’s chinstrap remain in contact with their chin or jaw whenever the motorcycle is in motion. COMAR 11.13.05.02(F) mandates

(1) Each approved helmet shall be equipped with either a neck or chin strap and be fastened when the motorcycle is in motion.

(2) The protective headgear shall be worn on the head with chin strap properly fastened, and in contact with the chin or jaw by both operator and passenger at all times that the motorcycle is in motion.

Generally, these same rules apply to those riding motor-scooters or mopeds.  But the specific law (21-1306.1) requires headgear that conforms to the standards laid out by the federal government as opposed to the MVA. Still, the Administrator has wide discretion to approve or disprove helmets and headgear.

There is also an interesting provision in the law that provides some civil protection to motorcyclists involved in accidents. Specifically, the law prohibits evidence of a rider not wearing a helmet to come in as evidence of negligence, contributory negligence, or diminish their recovery for damages.  So there is no "the motorcyclist was not wearing his helmet" defense under Maryland law.

(While we are talking about Maryland motorcycle law, it is also worth keeping in mind that §22-403 of the Transportation Article requires that motorcycles are  equipped with two rearview mirrors.) 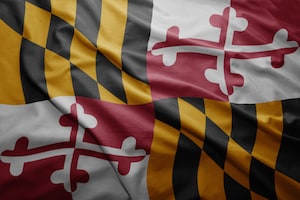 The Maryland legislature passed 21-1306 in 1992. Granted, this was not the first time that motorcyclists were required to wear helmets in the state. The 1992 law can trace its origins back to the National Traffic and Motor Vehicle Safety Act of 1966, which set minimum standards for road safety and required states to either meet this minimum or pass regulations that exceeded federal safety standards. Maryland responded by enacting a law requiring the use of a “firm and durable protective helmet” when operating a motorcycle. After tinkering with this law a few times (including only making it applicable to minors), the legislature attempted to create a more concrete method for standardizing the types of helmets that could be worn.

In 1973, the federal government actually helped lay the foundation for Maryland’s law. The DOT put forth requirements that finally standardized the types of helmets that could be worn. They specifically released various performance and testing requirements, which have been amended throughout the years. In 1992, Maryland followed suit and made helmet usage mandatory across the board, while implicitly using federal safety standards as the baseline for approving or disapproving the use of certain helmets in Maryland.

Believe it or not, there was actually a court case that challenged the constitutionality of the helmet law.  This case went all the way to the highest court in Maryland. The 1998 case, Ferro v. Lewis, suggested that the law was void because MVA neglected to publish a comprehensible list of approved helmets right off the bat.

In the end, the court said that motorcycle riders could easily glean this information from brochures published by the federal government, since Maryland used federal guidelines as a baseline. Granted, the provision requiring the administrator to publish a list of approved helmets was probably in there to ease consumer confusion when selecting a helmet. So this decision did not really help much in that regard.

There is no doubt that helmets can be uncomfortable and even annoying at times. Some riders insist upon not wearing them. But at the end of the day, having that layer of protection between your head and the road can be the difference between life and death. Nobody likes having the government tell them what do to, especially when it involves commands like wearing a helmet. Then don’t do it because the government says so. Do it so that your family does not call our lawyers asking about a wrongful death lawsuit. The numbers simply do not lie: helmets save lives and generally make the road a safer place for everyone.

If you have been injury in a motorcycle accident case in Maryland, your damages are the same whether or not you were wearing a helmet. What matters is that you were hurt by the negligence of someone else. If you have been hurt or have lost a loved one, call Miller & Zois at 800-553-8082 or get a free online consultation.