In a legal malpractice case in Maryland against a lawyer, a plaintiff needs to show these three elements:

The latter requirement is usually the most difficult to prove. Often legal malpractice is easy to establish. Demonstrating that some harm occurred as a result is often more problematic. Legal malpractice lawyers call this the "case within the case." Accordingly, a lawyer bringing a legal malpractice claim on your behalf must demonstrate that you would have prevailed in the original case.

Legal malpractice can occur for a variety of reasons missing the statute of limitations, failure to offer expert testimony on a critical element of proof, missing a filing deadline during litigation, just to name a few. Obviously, if you go beyond the personal injury lawyer context there are scores of other types of legal malpractice, such as failure to perform due diligence in a business transaction, flawed title searches in real estate sales, and so forth. 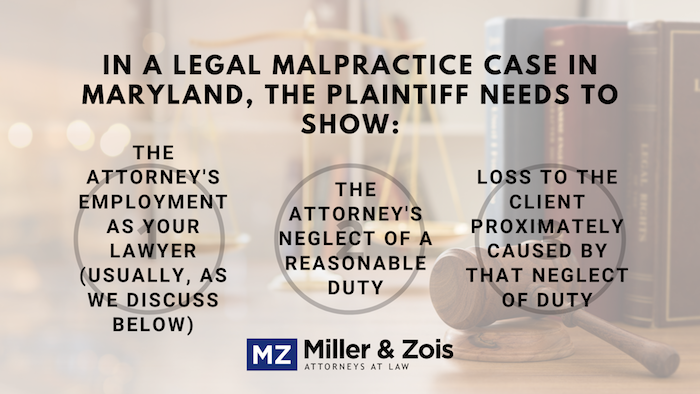 If you would have a legal malpractice case in the Baltimore Washington area that you want to discuss with one of our lawyers, call us for a free consultation at 800-553-8082 or get a free no obligation online consultation.

Recent Maryland Legal Malpractice Cases of NoteMore Maryland Legal Malpractice Information
Practice Areas
Client Reviews
★★★★★
They quite literally worked as hard as if not harder than the doctors to save our lives. Terry Waldron
★★★★★
Ron helped me find a clear path that ended with my foot healing and a settlement that was much more than I hope for. Aaron Johnson
★★★★★
Hopefully I won't need it again but if I do, I have definitely found my lawyer for life and I would definitely recommend this office to anyone! Bridget Stevens
★★★★★
The last case I referred to them settled for $1.2 million. John Selinger
★★★★★
I am so grateful that I was lucky to pick Miller & Zois. Maggie Lauer
★★★★★
The entire team from the intake Samantha to the lawyer himself (Ron Miller) has been really approachable. Suzette Allen
★★★★★
The case settled and I got a lot more money than I expected. Ron even fought to reduce how much I owed in medical bills so I could get an even larger settlement. Nchedo Idahosa
View More
Submit a Law Firm Client Review
Our Firm ›
Attorneys ›
Medical Malpractice ›
Personal Injury Practice ›
Communities Served ›
Injury Victim Help Center ›
Plaintiff Attorney Center ›
Insurance Company Insight ›