The Maryland Court of Appeals is still working during the coronavirus shutdown.  The court put out a new opinion Monday in Nationwide v. Shilling that addressed the question of when the 3-year statute of limitations begins to run on a claim for underinsured motorist benefits.

The gist of the court’s holding is good for plaintiffs.  The court found that a claim for underinsured motorist benefits is basically a breach of contract action. So the statute of limitations begins to run when the insurance carrier breaches the contract by denying the insured’s UIM claim.  Our lawyers have always interpreted the law this way.  But we always pretended that the statute of limitations was not extended because even having to fight this issue and win is not worth the trouble of not fighting the issue at all.

The Plaintiff was coming to a stop on Odenton Road when she was violently rear-ended by the vehicle behind her. The impact resulted in major injuries requiring 3 years of ongoing treatment. The at-fault driver was underinsured with only a $20,000 auto insurance policy. The Plaintiff was insured by the Defendant/Appellant, Nationwide Mutual Insurance Company (“Nationwide”). The Plaintiff’s auto insurance with Nationwide included $300,000 in uninsured or underinsured motorist coverage.

In September 2016, the Plaintiff filed suit against Nationwide in Circuit Court for failure to pay UIM benefits. Nationwide moved to dismiss the case on the grounds that the 3-year statute of limitations on Plaintiff’s UIM claim had already expired. Nationwide took the position that the 3-year limitation period on a UIM claim should begin to run whenever the tortfeasor’s policy is exhausted. In Nationwide’s view, this occurred in April 2013 when Plaintiff accepted the policy limits settlement offer from the at-fault driver’s insurance company. The victim’s lawyer understandably took the position was that the limitations period does not being to run until the claim for additional UIM benefits is formally denied.

The Circuit Court for Anne Arundel County agreed with Nationwide’s position that the 3-year limitations period on Plaintiff’s UIM claim began running when she agreed to the policy limits settlement with the at-fault driver’s insurer. Based on this interpretation, the Plaintiff’s UIM claim was time-barred and the case was dismissed. The plaintiff appealed. The Court of Special Appeals reversed. In Shilling v. Nationwide Ins. Co., 241 Md. App. 261 (2019), the COSA held that the limitations period did not begin to run until February 2014 when Plaintiff formally executed the policy limit settlement and deposited the check.

Nationwide appealed the COSA decision and the Court of Appeals granted Cert. to address when the statute of limitations begins to run on an insured’s action against their own insurer for UIM benefits.

The Court was presented with a choice between 2 opposing theories for determining when the limitations period on a UIM should begin to run. Nationwide was advocating for a “date of exhaustion” rule, under which the limitations period on a UIM claim begins when the tortfeasor’s policy limits are exhausted. In Nationwide’s view, this occurred when the at-fault driver’s insurance consented to a policy limits settlement (regardless of when the check is deposited).

Plaintiff’s lawyers urged the Court to adopt a “date of denial” rule for determining when the limitations period on UIM claims begins to run. Under this theory, the statute of limitations in a UIM claim runs when the insurer formally denies the insured’s claim for UIM coverage under the insurance policy. 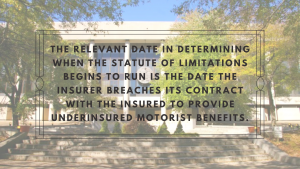 The Court ultimately adopt Plaintiff’s “date of denial” rule based on what is called “[t]wo foundational legal principals[.]” First, the Court explained that an insured’s claim against their insurer for UIM benefits is essentially a breach of contract claim because the insurer’s liability is contractual. Second, the Court noted that the fundamental principles of contract law dictate that the statute of limitations begins when the contract is breached:

Notes and Commentary (and Fears)

At first glance, the Court’s ruling may seem like a win for plaintiffs and personal injury lawyers. By adopting the “date of denial” rule for when the limitations period on a UIM claim begins, the Court has seemingly given the plaintiffs’ attorneys extra time to pursue a UIM claim for additional damages. The problem is that insurance adjusters will undoubtedly adapt their policies and procedures very quickly in response to this new rule.

The most obvious response we can expect from insurance carriers is that they will probably start denying UIM claims as early as possible. For instance, in this case,  Nationwide never formally denied the UIM claim, even when the plaintiff ignored their request for additional medical records for over a year. That approach probably won’t happen anymore. Insurance carriers will probably start sending out some sort of preemptive denial letter to start the clock running on UIM claims.

But the court throws in another point which I don’t think was well thought out and underscores why dicta is dangerous.  The court cited the Supreme Court of Nevada in Grayson v. State Farm Mutual Automobile Insurance:

The insurer can protect itself from claims that are remote in time by including explicit, unambiguous time limitations [for an insured to demand underinsured motorist benefits] in its insurance contracts. Additionally, the fair remedy of laches would protect insurers from the costs associated with any unreasonable delay on the part of the insured.

So insurers could use contract language to alter the statute of limitations or create notice requirements in uninsured and underinsured motorist cases?  This would be a disaster.  My hope is that any changes in this regard would be shut down by the Maryland insurance commissioner.  But it is an issue we need to keep an eye on to prevent a disaster.