In Williams v. Baltimore City, the Court of Special Appeals of Maryland examined the establishment of actual or constructive notice. The court found that the mere fact that a municipality knows of a defective hydrant does not ordinarily include notice of a particular danger. Rather, there must be actual or constructive notice of a particular defect that caused the injury. The court concluded that there was no error in granting summary judgment in favor of the municipality because the plaintiff failed to produce sufficient evidence that a leaking hydrant created a dangerous roadway condition that caused her accident, even though the plaintiff did provide evidence that the hydrant itself was defective.

This is a car accident case.  The plaintiff hit her brakes as another car pulled in front of her on Franklin Square Drive near its intersection with Balistan Street in Baltimore City.  Her car swayed and she lost control and her car ended up on its side.  The fire department had to cut her out of the vehicle. She sought immediate treatment at Franklin Square Hospital .

Plaintiff filed a lawsuit in the Circuit Court for Baltimore City, naming the Mayor and City Council of Baltimore City as a defendant. In her complaint, Ms. Williams alleged that she lost control of her vehicle and sustained a personal injury because a fire hydrant was leaking water and created a dangerous condition. Specifically, the plaintiff’s theory of liability was that the City had negligently allowed a fire hydrant on the northwest side of the four-lane road to leak water onto the road.  So the water spilled across all four lanes into her far southeastern lane caused her to lose control of her vehicle.  For summary judgment, the issue is whether the city had notice of the defect.

Was There Notice of a Defect?

A few years before the crash, the City received multiple complaints of a leaking fire hydrant. A Baltimore City Department of Public Works (DPW) employee investigated the location and referred the hydrant to the maintenance department to put in a new hydrant. Months later, the city logged a citizen service request for a “water break” at the location of the fire hydrant. Upon arrival, a responding DPW employee observed a leaking hydrant. After several other complaints, a DPW employee returned and observed that “there were no leaks and no noise.” The employee greased the operating nut and noted clean-lines. Following, both the work order and the service request were marked as “closed” to reflect that the work had been performed.

A few more months later, yet another report came to the city for this same hydrant.   A utility investigator for DPW responded the next day and noted, “There was a leaking valve at this location making medium water, but no damage.” The investigator wrote that “medium water” means, “it’s not a heavy flow of water.” He further defined “no damage” as “no damage done to the street.” He stated that his job duty after observing “medium water” and “no damage” would be to call and report it to the valve truck.  The utility investigator’s unchallenged deposition testimony was that if he had noticed that the “medium water” had created an icy condition on the road, he would have let dispatch know that it was an icy condition that needed an immediate response and that he’d put cones out.

The City filed for summary judgment, arguing that although the City had prior notice of an intermittently leaking fire hydrant, it had no prior notice of an allegedly icy condition on the roadway that allegedly caused the accident.  Baltimore City Circuit Court Judge John S. Nugent granted the City’s motion and dismissed the case.  Judge Nugent found that “record reveals that the
City had actual notice of the defective condition of the fire hydrant” but “municipality will only be held liable where plaintiff can establish that it had actual or constructive notice of the bad condition that caused the damage.”  The judge found that as a matter of law there was not sufficient evidence that water or ice was the cause of the defect.

What Is the Court’s Holding in Williams v. Baltimore?

Ms. Williams argued that the trial court erred in granting summary judgment for four intertwined reasons. First, she contended that the court ignored whether it found material facts in genuine dispute existed, failing to satisfy the requirements necessary for granting summary judgment. Second, Ms. Williams asserted that material facts in dispute did exist. Third, Ms. Williams stated that the court was required to draw inferences of fact in her favor, yet it did not. Finally, Ms. Williams claims that she provided sufficient evidence that a reasonable jury may find that the water running across the roadway may have been a proximate cause of her vehicle losing control. 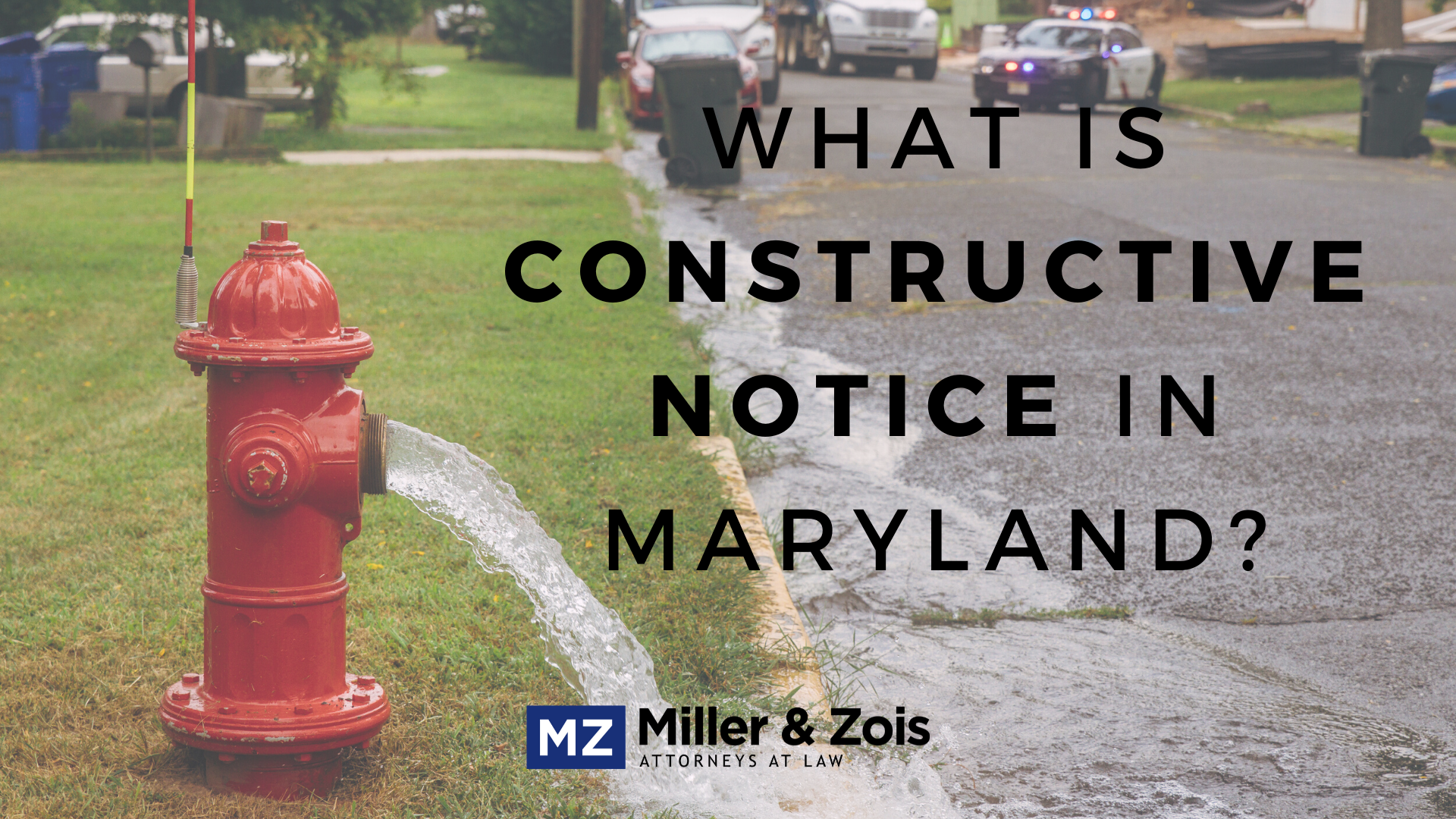 The court further held that plaintiff’s mere general allegations which do not show facts in detail are insufficient to prevent summary judgment. Despite the volume of evidence presented to show that the City had notice of the faulty hydrant, the court concluded that the plaintiff failed to present evidence giving rise to an inference that the City had constructive notice of water or ice across the roadway that caused the injury.

Accordingly, while Ms. Williams could establish that the municipality had notice of the faulty hydrant, she could not establish actual notice of ice or water that caused her injury. Therefore, in the absence of other admissible evidence, Ms. Williams did not create a genuine factual dispute about whether the city had constructive notice of any hazardous roadway condition or bad condition that caused the damage.

What Did We Learn in Williams v. Baltimore?

The notice issues in the case are interesting and I’m not so sure I agree with the court. We are talking about three efforts to fix a hydrant. It is really unforeseeable that a small leak turns into a big leak and water can turn to ice? It is hardly a stretch, right? How much water has to come out before the City is put on notice that a little water can turn into a lot of water and that water can freeze?

I read the briefs in this case at one point the City tries to say the whole claim is nonsense:

Unlike the slick floors of indoor malls and shopping centers, outdoor roadways are designed to get wet on a regular basis and those who utilize them are expected to anticipate such variation in traction that the ubiquitous possibility of water may entail.

Ah, no.  I expect my roads to be wet and ice where there is a reasonable belief that they could be.  But it is absurd to suggest we should all be prepared for ice roads because of a leaky fire hydrant.

But I think the plaintiff should lose this case.  Why?  I agree with the trial court and the Maryland Court of Special Appeals on the causal link of the hydrant to the crash.  There is no res ipsa here. The plaintiff has to marshal evidence of a causation relationship and that is a tough road without an expert.