In this post, we will look at the effectiveness of anterior cervical discectomy and fusion (ACDF) as a surgical option for the treatment of chronic back pain. ACDF is a special type of back surgery in which a spinal disc is actually removed in order to relieve nerve root pressure and eliminate chronic pain. 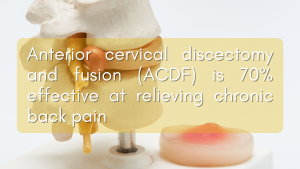 This frontal approach offers 2 key benefits. First, it gives the surgeon direct visualization of the cervical discs involved in the back pain and full access to almost the entire cervical spine. It also gives the surgeon a clear, uncomplicated pathway for the removal. Second, the anterior approach tends to result in far less post-operative pain and complications compared to a posterior operation.

What is ACDF Surgery Used For?

ACDF back surgery is generally used for the treatment of disc herniations in the cervical region of the spine. A herniated disc occurs when one of the spinal discs ruptures allowing the inner jelly-like tissue to come out causing painful pinching or pressure on nearby nerves. ACDF can relieve the chronic pain of a cervical herniated disc by removing the disc.

Although most commonly used to treat disc herniations, ACDF is also a treatment option for degenerative cervical disc disease. It is also occasionally used to eliminate symptoms related to cervical spinal stenosis and bone spurs caused by arthritis.

ACDF is not considered a particularly risky surgical procedure, but like any surgery, it does involve some level of risk and various complications can arise. The primary complications and risks that most frequently occur with ACDF surgery include:

Aside from these specific risks, ACDF surgery also comes with the same general risks inherent with all surgical procedures.

Is ACDF Effective at Relieving Pain?

While other types of back surgery can be performed in an outpatient setting, ACDF is a major surgical operation so many people are reluctant to attempt it. Studies have shown, however, that ACDF surgery can be more effective at eliminating chronic back pain and related symptoms.

ACDF surgery is a common treatment for the types of back injuries we often see in auto accidents and other types of personal injury lawsuits. As long as the plaintiff can show that the ACDF surgery was medically necessary treatment for injuries caused by the defendant’s negligence, they can get financial compensation for the surgery. Below are examples of actual personal injury cases in which plaintiffs received compensation for ACDF surgeries.

If you injured your back in an auto accident or other incident caused by the negligence of another, contact the personal injury lawyers at Miller & Zois for a free case evaluation.A