Hypoxic-Ischemic perinatal encephalopathy (“HIE” for short) is loss of oxygen to the brain. In slightly less than half of the cases, HIE can cause death or brain injuries.

Obviously, the brain is the key to neurological function. The brain commands and controls all of our essential actions and reactions. This includes sending messages via neurotransmitters to control all of a person’s essential cognitive and physical functions. The brain is fed by blood and oxygen. All of our brains, especially the fetal brain in particular, are highly dependent on blood and oxygen to survive. If the fetal brain is deprived of blood and oxygen for a sufficient amount of time, it becomes permanently damaged by hypoxia and ischemia. Not only does the brain need oxygen, but the cells need oxygen also. Some birth injury cases (we are handling one now) involve damage to other vital organs that have suffered irreparable injury from lack of oxygen during the birthing process. Without oxygen, the vital cells in the brain and other organs shut down. To make matters worse, dead cells give off toxins which are called cytokines and which cause additional injuries above and beyond the ischemic injury initially caused by the lack of oxygen. The amount of time that the brain is deprived of oxygen is critical to the baby’s outcome. If the child’s brain is deprived of blood and oxygen for an extended period of time, 15 minutes is the amount of time often mentioned, then the brain becomes permanently damaged. The result is a brain that cannot provide normal neurological function, meaning that the person with the brain injury loses the mental and physical abilities to move, think and live the way their DNA intended. The result in some cases could be cerebral palsy, spastic quadriplegia, seizures, epilepsy, and/or developmental and cognitive delays.

How Do You Diagnose HIE?

The medical evidence used to determine the cause of hypoxic-ischemic brain damage is well described in the medical literature. The starting point is the Sarnat Scale, which grades the infant based on the child’s clinical presentation, examination findings, the presence of seizures and the duration of illness. Sarnat staging is used with EEGs, ultrasounds, MRIs, and cord blood gas levels.

There are studies that show that cooling (hypothermia treatment) of the child can reduce the incidence of disability and death in children with HIE. The research also shows that cooling has the greatest benefits if it is done within six hours of birth. Cooling can be done on the whole body, which is sometimes wise if there is a concern that other organs besides the brain have been compromised.

Was HIE Caused by the OB’s Negligence? 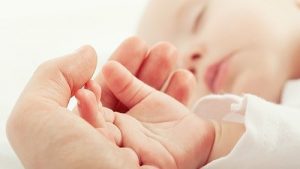 The starting point for determining the doctor’s care during the birthing process is the fetal heart monitoring strips. If the strips show that the baby was in trouble because the baby had what is called a non-reassuring fetal heart rate, then the obstetrician may need to expedite the delivery. In many birth injury cases, the OB failed to see the signs of trouble that were there and failed to take action. What action? The OB has a lot of weapons to speed up delivery, but a C-section is often the best and most obvious procedure to use. We have seen many cases where hypoxic ischemic encephalopathy was directly and proximately caused by the failure of the OB or the treating labor and delivery nurses to have the mother in the operating room prepared and readied for an immediate C-section delivery.

Compressive cerebral ischemic encephalopathy (CCIE) is a type of HIE. CCIE specifically identifies the causative mechanism of the loss of oxygen. Typically, CCIE involves reduced cerebral perfusion secondary to increased intracranial pressure that occurs after prolonged and excessive uterine activity with inadequate rest between uterine contractions. It is sometimes the result of the excessive use of Pitocin. Like HIE, CCIE injuries generally present with a spectrum of brain injury severity. CCIE may occur in combination with intracranial traumatic injuries, but CCIE is confounding because it may also occur without obvious head trauma or molding. The child might have HIE without the usual suspects of hypoxia, ischemia, or acidosis.

Can HIE Be Caused By Something Before Childbirth?

It is true that hypoxic-ischemic injuries can occur in the antepartum period before childbirth. But, antepartum HIE injuries cumulatively account for only a small portion of neonatal hypoxic-ischemic encephalopathy cases. In medical malpractice cases, defense lawyers try to point to literature that implies otherwise. But even if the problem had been developing before childbirth, that does not absolve the OB from the obligation to get the baby out if the heart monitoring showed that there was a problem.