Employers are required to pay their employees according to certain minimum standards set out by federal and state statutes. On the federal level, the Fair Labor Standards Act sets out the minimum wage, overtime wage, recordkeeping, and child labor standards for the country. Maryland's law is sometimes stricter than the federal one-for example, the minimum wage is higher in Maryland.

On this page, we discuss the Maryland Department of Labor's general wage laws, minimum wage laws, and overtime laws. We also provide examples of verdicts and settlements that have been won when employees sue their employers for violations of these laws. To explore a particular topic, follow the links below.

It goes without saying that Maryland employers must pay employees for all time worked. The Maryland Wage Payment and Collection Law states that employers are required to have regular pay periods and pay their employees at least every two weeks or twice a month. Additionally, they must notify employees at the start of their employment what their pay rate and pay period are.

If an employee leaves their job or is fired, employers must pay the employee any remaining pay they are due up until the date of termination, unless the employer has a written policy saying otherwise.

Employers must keep a record of their employee's employment information for at least three years, including their name, address, occupation, wage, pay period, and hours.

What is the Minimum Wage in Maryland?

"Maryland's minimum wage is gradually increasing to $15 per hour."

The schedule for meeting this goal, defined in the Maryland Wage and Hour Law (specifically, §3-413 of Maryland's Labor & Employment Article), is as follows:

The minimum hourly wage for employers with greater than 14 employees

The minimum hourly wage for employers with fewer than 14 employees

Note that some counties, too, have their own minimum wage laws.

What are the Prevailing Wage and Living Wage Laws?

What are Maryland's Overtime Laws?

"Overtime hours must be compensated at a rate 1.5 times higher than the normal salary."

Exemptions to Maryland's overtime laws are the same as the minimum wage exemptions listed above with the addition of employees who earn minimum wage working the following jobs: 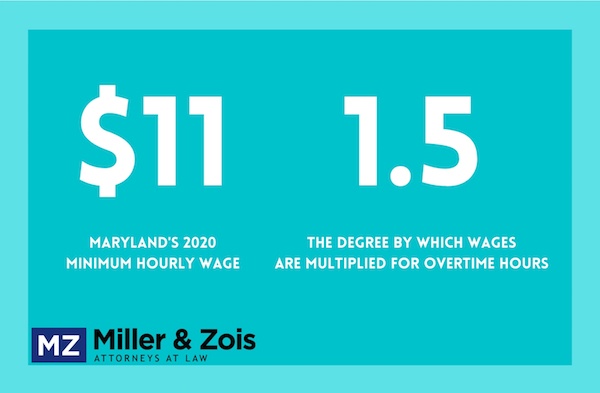 I have a Complaint, What are my Options?

If you were not properly compensated for your work, there are three options to rectify this situation if your employer is not cooperating.

First, you can file a claim with the Maryland Department of Labor. Your employer will receive a letter notifying them to pay the unpaid wages. If the employer still does not pay, the Employment Standards Service (ESS) will conduct an investigation.

"If you were not paid for your work, you can file a claim with Maryland state government, file a civil lawsuit, or file criminal charges."

Secondly, you can file a civil claim, or in other words, you can file a lawsuit. You may be able to be awarded up to three times the amount of your unpaid wages, interest, penalties, and be compensated for the cost of hiring an attorney.

Third, you can file criminal charges. In some cases, Maryland may prosecute employers who refuse to pay their employees for no reason or who never intended to pay someone they hired.

Employers are often sued by multiple employees at the same time for wage violations. This is known as a class-action lawsuit, or a global settlement. With large companies, these lawsuits can have thousands of plaintiffs.

The value of your case will depend on how long you were being underpaid and the value of your wages. Additionally, the interest on your unpaid wages goes up the longer you have not been paid. Maryland tends to take these cases seriously and will make sure you get compensated for more than what you lost if a jury finds against your employer.

Below are examples of settlements and verdicts in wage and overtime lawsuits from across the United States. Some are class-action lawsuits and are thus worth many millions of dollars in total. Individual plaintiffs receive a fraction of the overall settlement. Others are lawsuits with just one plaintiff and are worth thousands of dollars. We provide these examples to help potential plaintiffs understand what their case might be worth.

The Maryland employment lawyers at Miller & Zois may be able to help you recover your unpaid wages. Contact us today for a free consultation of your case by calling (800) 553-8082 or by filling out our brief online form.