The Circuit Court for Montgomery County in Rockville is the general jurisdiction court with authority over all major civil cases and serious criminal cases arising within the County.

Montgomery County is one of the largest counties in the U.S. The Rockville courthouse is a reflection of that size and scale. The Circuit Court for Montgomery County handles all matters that come with a right to a jury trial.

The Rockville court has 24 sitting judges and a small army of administrative staff to handle the thousands of cases that come through its doors each year. 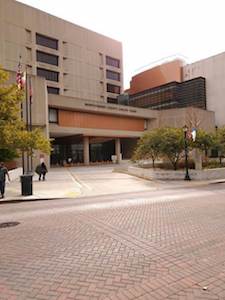 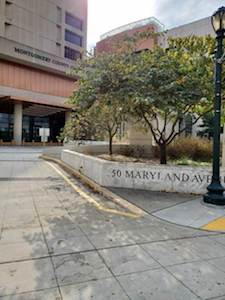 The Judicial Center was built in 1980 to accommodate the County's booming suburban population. The Judicial Center is an expansive modern building with 9 floors with a single main entrance on Maryland Ave. The first 5 levels of the Judicial Center are home to various administrative branches of the court including Clerk of the Court, Court Administration, Register of Wills, Land Records, State's Attorney, Sheriff, and Family Services. The actual courtrooms and judges' chambers are located on the top 4 levels.

Even with all this space the Judicial Center building bursting at the seams by the early 2000s due to a steady increase in the volume of civil filings. This need for increased capacity eventually led to the Montgomery County Circuit Court Annex Project. In April 2014 the Annex (called the South Tower) officially opened and became part of the Judicial Center building. The new South Tower features 10 modern courtrooms, 8 hearing rooms, and additional space that includes a Kids Spot Child Waiting Area.

History of the Circuit Court in Rockville 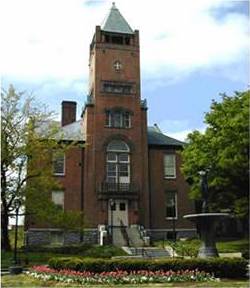 Rockville has been the County Seat of Montgomery County since its formation and the very first County courthouse opened its doors in 1785 on the land that historic Red Brick Courthouse now stands on. A new building, known as the "Second Courthouse in Rockville" was completed in 1840 and located across the street from the Red Brick Courthouse, near the site of the current Executive Office Building.

By the end of the 1800s Montgomery County was still a small, rural community with a population of only 30,000 but it was starting to grow as Washington DC began to spill over.

The Circuit Court for Montgomery County is one of the more easily accessible courthouses in Maryland. The Judicial Center building is located in the heart of Rockville. The Courthouse itself is a short walk from the Rockville Metro Station. If you drive to the Judicial Center there is ample public parking within the surrounding blocks.

If you prefer to just park in a garage there are also plenty of options. Below is a summary of the best parking garages:

As recently as the 1990s, jury trials were still a relatively rare event at the Judicial Center building in Rockville. Since then, however, the volume of civil case filings in Montgomery County has skyrocketed and today jury trials are not uncommon. This means that if you happen to live in Montgomery County your chances of getting summoned for jury duty are steadily increasing.

Jurors can park in a special Juror Parking Lot located at the corner of E. Jefferson St. and Monroe St. The lot is unmarked and does not have a street address but you can watch this video for help in locating the Juror Lot. From the Juror Parking Lot, the best way to get into the Montgomery Courthouse building is through the Jefferson Street entrance.

The Circuit Court for Montgomery County has 24 sitting judges; 5 magistrates that handle family law matters, and a panel of 20 senior judges that are periodically called upon to handle conferences and preside over trials when necessary. Below is the roster of Montgomery County's sitting Circuit Court judges and contact information for their chambers.