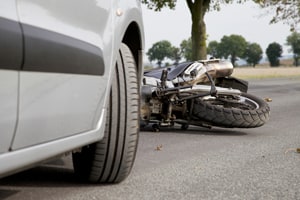 You would not think that people would need reminding that motorcycle riders have the same rights as drivers on the road. Too many motorcycle accidents are the result of people forgetting or perhaps just ignoring this fact. Our Maryland motorcycle accident lawyers see far too many of these claims. Riding a motorcycle can be dangerous, but a lot of this danger comes from car and truck drivers that are distracted or just fail to consider motorcycles when looking both ways. When another driver fails to respect the rules of the road and causes a motorcycle accident, the resulting injuries are often far worse for the bike rider. Therefore, it is up to the motorcyclists to ensure that these other drivers are held accountable.

What Causes These Accidents?

In Maryland, approximately 32% of motorcycle accidents involve another vehicle.  Approximately, 15% of the time, the accident occurs at an intersection, while, the remaining 17% happens on the open road. When you think about it, this is a fairly noteworthy statistic: more accidents happen when motorcycle riders are driving down the street in the same direction as cars than at intersections. You would think it would be the other way around, right?

National data shows more of a 50/50 split between intersections and the open road. But the national statistics show that in 35% of motorcycle accidents, the other driver caused the crash by failing to yield to the motorcycle. Motorcycle riders, on the other hand, failed to yield in only 4% of accidents. Obviously, this shows that motorcyclists are typically not the problem when it comes to multi-car accidents. They are usually caused by the inattentive, misinformed, or incorrect motorist.

The reality is that safe motorcyclist rarely causes an accident. Sure, there are tons of motorcyclist getting themselves killed driving like they belong in an insane asylum. Our attorneys see this all of the time. But if you are operating a bike safely, you have a great feel for the challenges on the road and fewer encumbrances to operating the vehicle safely. If you are inattentive, you often have an easy ability to correct your mistake; because of the ease of a motorcycle. What you cannot protect yourself against with ease is the negligence of another motor vehicle, and when that happens, the consequences are significantly amplified.

Why Are Drivers Not More Attentive?

We live in a world where distracted driving is the norm.  Where texting and driving seems to be more common than paying attention and driving. While this presents an issue for all drivers on the road, the risk is especially high for motorcycle riders.

Motorcycles are smaller, less visible, and frankly easier to miss. When you check your blind spot (hopefully) before you merge, you are looking for a car, so your brain may not process the fact that a motorcycle is in your blind spot, even though you are staring right at it. Plus, we have to deal with bad drivers, drunk drivers, and speeders, who only make motorcycle riders' lives more stressful.

Verdicts and Settlements in Failure to Yield Cases

Below are verdicts and settlements in failure to yield cases motorcycle accident lawsuits. Except for the Miller & Zois verdict, these were plaintiffs’ victories we pulled at random, to give you some sense of the value of these cases. But these are short summaries. It is hard to know what a case was really about in just a summary. Please do not think that you can find a similar case and assume that is the value of your claim. This cuts both ways. These verdicts seem to be surprisingly small. Ultimately, this is one tool of many to help you get a better grasp of the possible range of settlement or trial value of your claim.