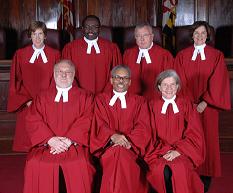 Maryland's highest court hears cases almost exclusively by way of certiorari, a discretionary review process. In other words, it only considers cases that it believes have issues that are worth addressing. If the court does not believe there is an issue that needs to be given further consideration or analysis, it will deny certiorari and refuse to hear the case.

A petition for writ of certiorari filed in the Maryland Court of Appeals seeking the court to overrule a decision of the Court of Special Appeals must be submitted no later than 15 days from the date of the order of the Court of Special Appeals. Occasionally, a the court will snag an appeal from Circuit Court and bypass the intermediate appellate court. This happened to us in one of our cases. But it is rare.

Another important function of the Maryland Court of Appeals is that the court may adopt rules of judicial administration, practice, and procedure that have the force of law. The most notable example of this is Maryland Rules which sets forth the rules of practice and procedure for Maryland state courts.

The Maryland Court of Appeals also supervises the exercise of the disciplinary and reinstatement powers of the local courts, as the Court of Appeals has original and complete jurisdiction over attorney discipline matters. A court must insist upon the maintenance of the integrity of the Bar and to prevent the transgressions of an individual lawyer from bringing its image into disrepute.

This high court has exclusive jurisdiction over death penalty appeals (a thing of the past), lawsuits involving redistricting/gerrymandering, issuing advisory opinions to federal courts, and the removal of elected officials.

This is the current makeup of the Maryland Court of Appeals in 2020:

Brynja McDivitt Booth, Jonathan Biran, and Mary Ellen Barbera are all on the ballot in November 2020 because we have a antiquated system where voters confirm nominated judges. Marylanders smartly defer to the governor and confirm appellate judges.

Four of the judges were nominated by a Republican governor; three were nominated by a Democratic governor. This is less of a big deal in our state. Maryland Court of Appeals judges have traditionally (and remarkably) been very nonpartisan, nonpolitical judges. Governors Ehrlich, O'Malley and Hogan all seemed to set party affiliation aside and reach to select the most qualified judge.

It is the opposite of the U.S. Supreme Court where political affiliation tells you almost everything about how a justice will vote. Dissenting opinion are not infrequent. But they are never personal attacks on the majority opinion. Our lawyers get frustrated with the court because it is sometimes stuck in the 19th century. But we have honest people trying to make the best calls they can. Marylanders should be proud of their court.

One thing that surprises people about the Maryland Court of Appeals is that, unlike the U.S. Supreme Court, retired Court of Appeals judges often stay on the bench. It is an odd rule that allows retired judges to be recalled into service on the court. So you will regularly see retired judges coming back and deciding cases, particularly Judge Alan Wilner, Judge Sally Adkins, and Judge Lynne A. Battaglia.

Often major 4-3 rulings involve one or more retired judges who return to the court. Retired judges give Maryland a very deep bench of knowledge and experience. But whether there is wisdom in having an inconsistent court is another question that is harder to answer.

In the past, there were too many obstacles in getting opinions back from the court. New Chief Judge Mary Ellen Barbera (actually not so new anymore) has done a fantastic job of turning that around and getting opinions decided in a reasonable time frame.

Renaming the Court of Appeals

The debate over changing the name of the Maryland Court of Appeals is hardly new. Back in the 1960s there was extended discussion at the Maryland Constitutional Convention about whether to rename the high court. The motivation for the name change is simple. 48 of the 50 states called their top appellate court their "supreme court." Maryland and New York are the only outliers.

This creates a lot of confusion, especially from people outside of Maryland, about whether the Court of Appeals is Maryland's highest tribunal. Lawyers, students, and parties outside of Maryland consistently make the mistake of assuming that the Court of Appeals is Maryland's intermediate level appellate court and that the Court of Special Appeals is the state's top tribunal. This is what some of the state's most senior judges said was the reason when they testified before the Maryland General Assembly in favor of the renaming bill.

The state legislature was wholeheartedly in favor of renaming. The bill to put the renaming amendment on the 2022 ballot passed the Maryland Senate by a vote of 40-7. Last month, the House of Delegates passed it by an even more decisive margin of 125-10. If voters approve the constitutional amendment in 2022, the Court of Appeals will be renamed the Maryland Supreme Court and the Court of Special Appeals will become the Appellate Court of Maryland.

Below are some of the more frequently asked questions about Maryland's appellate courts.

What Is the Supreme Court of Maryland?

How Many Appellate Court Levels Does Maryland Have?

How Many Judges Are on the Maryland Court of Appeals?

Maryland's Court of Appeals is comprised of seven judges. One of the seven judges acts as "chief judge" and maintains administrative control over the functioning of the court. Cases are decided by majority vote the judges.

How Are Judges Appointed to Maryland's Court of Appeals?

Judges to Maryland's Court of Appeals are nominated for appointment by the Maryland Governor. The Maryland State Senate confirms the appointment. The process is very similar to the appointment and confirmation of justices on the U.S. Supreme Court. Once appointed, judges on the Court of Appeals must run for continuation in office by an unopposed election. This is mainly a formality as no appellate judge in Maryland has ever been voted out in their confirmation election.