Many of our lawyers regularly bike. Maryland offers amazing options for bicyclists. The Appalachian Trail, the Baltimore Waterfront Promenade, Gunpowder Falls State Park, the Baltimore-Washington Trail, and countless others offer some of the best bike paths on the Mid-Atlantic. Our clients are rarely injured on bike paths. They are usually on a road, following the rules of the road, and getting hit by the driver of a car or truck that was not paying attention.

If you are a regular cyclist or one of the 50,000 people injured in bicycle accidents every year, you know that drivers and even pedestrians often struggle to see bicyclists to avoid a collision. Then you throw in poorly kept roadways and paths and dogs trying to chase you down... riding a bike in some areas of Maryland can be like navigating a minefield.

Most bicycle accident cases in Maryland are not personal injury claims. Over 500,000 bicyclists visit emergency rooms with injuries every year in the U.S. with over 1,000 deaths. Approximately 59% of all bicycle accidents are simple falls that do not involve collisions with any physical objects. But there are too many bike accident cases where the motor vehicle driver just did not give proper time and attention to the bike. 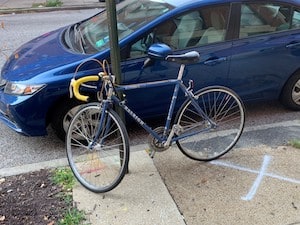 If you have sustained serious injuries or if you lost a family member because of a wrongful death in a bike crash, you may be eligible for compensation from the party or his insurance company. In Maryland, the damages you can receive are:

In most of our cases, the biggest element of damages is pain and suffering. Why? Because in serious injury and death cases, the most serious harm is the physical and mental suffering, not the medical bills and lost wages.

Below is a list of bike accident settlements and verdicts in and out of Maryland. First, a few thoughts on these payouts. Serious bike accident cases usually settle out-of-court. The bike accident lawsuits that do go to trial are generally smaller cases.

Our law firm also settles most of its bike accident cases and most of its cases in general. That said, we don't settle for less and every major insurance company in Maryland knows this.

Why do we publish these? While two bike claims are never the same, the lessons learned about the value of cases inform the value of new cases. This is more so with the type of injury than the type of accident. But both are instructive.

That said, these verdicts and settlements need to be swallowed with a grain of salt. No two cases are alike. The results of one case do not predict the results of another. Nor does the fact that a lawyer has a history of getting great verdicts mean they will continue to do so in the future.

Another thing to keep in mind is the importance of venue. We would like to think that juries give equal justice across Maryland. But they don't. The value of a case in Baltimore is substantially more than the exact same case on the Eastern Shore.

With that introduction, here are some examples of bike accident compensation awards: 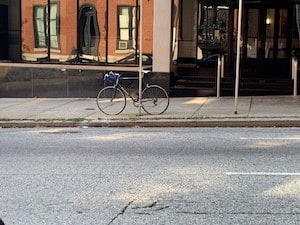 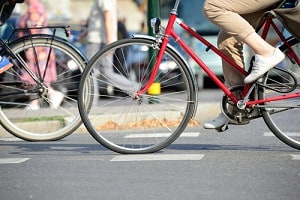 You can also find some interesting statistics on the chances of winning two-wheel - bicycle and motorcycle - injury cases here.

What Is the Average Settlement Compensation Payout for a Bicycle Accident Case Maryland?

The average settlement amount for a bicycle accident case in Maryland will vary depending mainly on the severity of the plaintiff's injuries.

In our Maryland bike accident lawyers experience, we estimate for minor injuries the average bicycle case value will be around $17,000-$30,000. A bicycle case with moderate injuries will have an average value of $55,000-$200,000. A case involving the most serious injuries will be worth over $200,000. All of this is somewhat dependent on the amount of available insurance coverage.

Can I Win a Bicycle Accident on the Sidewalk Claim?

There is no question that a disproportionate number of bicycle-motor vehicle collisions occur on sidewalks. The statistics on this risk led the Maryland legislature to pass § 21-1103 of the Transportation Article:

Is this law frequently enforced? Of course not. Baltimore City police could watch 1,000 bikes go down the sidewalk and would not move a muscle. But that does not change the fact that under Maryland law, the violation of a statute can be at least some evidence of negligence.

Can I Win a Bicycle Accident Case When I Was Driving Against Traffic?

Wrong-way sidewalk bicyclists are at particular risk because they enter the point of conflict from an unexpected direction, just as they would on the roadway. Md. Code Ann., Transp. § 21-1202 (2002) provides that a person operating a bicycle is subject to all the duties required of the driver of a vehicle by the traffic laws. So bicycles are not permitted to ride against traffic in Maryland.

As a result, these are tough cases to win. But they can be won if there are compelling facts.

How Much Settlement Compensation Will I Get in a Typical Bike Accident Case?

We give some estimates above but our lawyers do not have statistics for the average bicycle accident settlement in Maryland. You can use the sample settlements and verdicts we provide along with our estimates to give you some idea of the likely range of a settlement amount in your case. But ultimately, you need a bike accident attorney to review your case to really give you an average estimated settlement payout.

You can also look at settlement statistics based on the type of injury you have which is probably a better barometer of settlement value.

What Are the Key Bike Accident Laws in Maryland?

The rules of the road governing bicycles in Maryland are found in the Transportation Article, Title 21, Subtitle 12. Below are some of the key points of law in Maryland regarding bicycles.

Get a Maryland Bicycle Accident Attorney

Our law firm handles only serious injury and wrongful death claims for plaintiffs who need serious legal representation. If you want a Maryland bicycle accident lawyer who will fight to maximize your compensation payout, call 800.553.8082 or get a free online consultation.