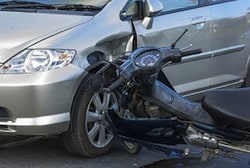 Motorcyclists who collide with passenger vehicles are at an immensely great risk of injury. Motorcycles do not provide the same structural protections that regular vehicles or trucks afford their occupants. Lacking this protection, there is little Maryland cyclists can do to absorb the impact of a collision.

This victim information report will discuss one of the most serious and deadly types of motorcycle collisions: left-turning vehicles colliding with motorcycles.

Driving a motorcycle is dangerous for many reasons. Not the least of which is car drivers who refuse to keep a lookout for motorcycles like they do for other vehicles.

The stats are pretty stunning. Motorcyclists are 35 times more likely to experience a deadly accident on the road than those in passenger cars. Every year approximately 4,810 motorcyclists are killed in road accidents.

More than half of motorcyclist deaths involved at least one other vehicle. An amazing 42 percent of two-vehicle fatal motorcycle crashes involved a vehicle turning left while the motorcycle was going straight, passing, or overtaking th vehicle.

What Kinds of Serious Injury Left Turn Cases Do We Typically See? 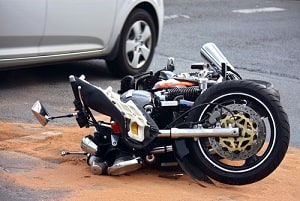 Accidents with motorcyclists caused by negligent left turning vehicles can happen in a number of ways. Consider the following:

Mike has had a motorcycle for over a decade now. Over the years, he has taken numerous safety and defensive driving courses. He is therefore acutely aware of how dangerous an accident could be for him especially if that accident involved a passenger vehicle. He makes sure to always travel slightly below the speed limit to give him time to avoid any potential collisions. He wears a helmet and only rides during the daytime hours.

This day is no different. Mike rides down Wisconsin Avenue in Bethesda with his helmet on and his eyes focused on the road ahead. As he passes through an intersection (he has a green light), he suddenly sees a Honda Accord, driven by Danny, making a sudden left turn across his lane of traffic. He swerves to the right to avoid hitting Danny’s car, and although he does avoid colliding with Danny, he flies off the road and crashes his motorcycle into a roadside fence.

Mike is ejected from his motorcycle and hits his face against the fence. He has multiple broken facial bones and will require several surgeries and speech therapy. This bike wreck is a tragic example of how someone’s negligence can nearly kill even the most cautious motorcyclist. Here, it is Danny’s negligent failure to yield the right of way that led to Mike’s severe and disabling injuries.

Settlements and Verdicts in Motorcycle Left Turn Cases in Maryland 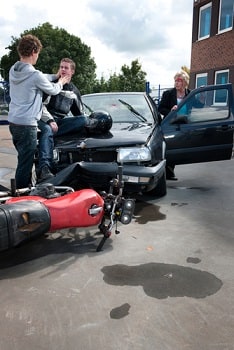 Our Firm Handles Only Serious Injury and Death Cases. Call Us.

Some lawyers will tell you a motorcycle accident case is the same as any motor vehicle injury case. For a thousand reasons, this is just not true. We have won millions of dollars for motorcycle accident victims and their families. Please contact us immediately at 800-553-8082 to find out if you have a claim or you are welcome to get a free case evaluation online.