Under Maryland law, photographs may be introduced in evidence in both civil and criminal trials. The purpose of admitting photographs into evidence is to to illustrate the description of a person, place or object so as to explain or apply the evidence. In car accident cases, personal injury lawyers are on both side of the admissibility of photographs. In a case with limited property damage, a plaintiffs' attorney wants to keep the pictures out of evidence. If the property damage pictures underscore a serious car accident, the plaintiffs' lawyer wants to get those pictures in evidence.

So there are constant pre-trial battles over the circumstances under which photographs of the vehicles involved in a car accident may be admitted at trial.

When we started our practice, our lawyers handled a lot of car accident cases where the property damage was not significant. Today, in most car or truck accident cases we handle, the property damage is such that we are seeking to admit the damages to the vehicles. Why? To underscore the violence of the collision so that the jury might appreciate why the injuries were what they were and, even more importantly, the trauma of such a violent hit is a component of Plaintiff's claim for pain and suffering. But our lawyers also handle cases where the property damage is less significant if we believe the Plaintiff has suffered a real injury.

Mason v. Lynch is a 16-year-old case on the admissibility of photographs in a car accident case. It is still good Maryland law today.

Before we get to Lynch, let's talk about the most famous case on the question of admitting car accident photographs at trial. In Davis v. Maute, 770 A.2d 36 (2001), the Delaware Supreme Court ruled in a landmark case on this issue that parties in traffic crash may not contend there is a correlation between the damage to the vehicles and the extent the Plaintiff's injuries unless expert testimony is proffered supporting the correlation.

Accordingly, if you may not rely on photographs of the cars involved in a crash to indirectly make that argument. The Davis court decided that in Delaware "absent such expert testimony, any inference by the jury that minimal damage to the plaintiff's car translates into minimal personal injuries to the plaintiff would necessarily amount to unguided speculation." In Mason v. Lynch, the Maryland Court of Appeals weighed in on this issue.

In this case, the Plaintiff stopped her car for traffic on the Woodrow Wilson Bridge in Prince George's County and was hit in the rear, a classic rear-end accident. Plaintiff contended that she had a closed head injury, cervical strain, and a temporomandibular joint disorder. She sought medical expenses, lost wages, and compensation for her pain and suffering. The trial court allowed admission of the photos of the plaintiff's vehicle and let the defendant offer the "common sense" argument: how could these injuries have occurred given this amount of damage to the vehicles? The jury then awarded no money to the Plaintiff. 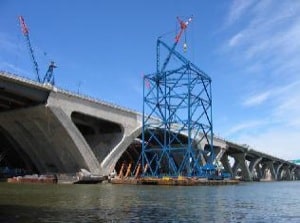 A split Court of Appeals affirmed that the trial judge's has discretion to allow into evidence photographs that allegedly illustrate the inconsistencies between the Plaintiff's injuries in the car accident and the property damage sustained by the vehicles involved even in the absence of expert testimony that establishes a correlation between property damage as illustrated in a photograph and the Plaintiff's injuries.

Writing on behalf of the majority, retired Judge John C. Eldridge wrote that "It is ordinarily within the discretion of the trial court to weigh the degree of relevance against any unfair prejudice which might arise from the admission of the photographs.... [accordingly], the trial court's ruling on admissibility will not be overturned on appeal absent a clear abuse of discretion."

In so holding, the court considered and then rejected the Davis v. Maute holding that required expert testimony must first establish a causal link between the damages to the vehicles and the injuries to one of the drivers in order for photographs of the accident to become admissible. The dissenting opinion written by Judge Irma S. Raker pointed to the scientific literature that shows there is no positive correlation between property damage and extent of injury.

The judge argued that "[t]here is no way that, based merely on the extent of property damage, a factfinder could assess the injury of a party and particularly, whether a party had a preexisting injury that was exacerbated by the impact. A review of the scientific literature expresses the view that there can be a strong inverse correlation between injury levels and measurable vehicle crush, especially in low speed, rear-impact collisions."

We have received a good deal of local and national exposure for getting exceptional verdicts where the Plaintiff significant personal injury in the absence of extensive (or even any) property damage. But, these days, our law firm really does not take those cases anymore absent unusual circumstances. That should tell you something. Now we are usually in the other chair arguing that the photos should come in because they look so awful

In every case where there is no major property damage, insurance companies have vigorously attacked the credibility of the plaintiff's personal injury claims of soft-tissue injury with pictures of property damage. Our cases were no exception. In spite of our motions in limine to exclude such photographs that argued logic similar to Davis v. Maute, the defense attorneys were permitted to admit the photographs.

Typically, the defense attorneys display large blow-up photographs of the Plaintiff's car and argue that the lack of visible damage means that the plaintiff could not have been seriously hurt in the accident. (And have their client testify that the impact was extremely minor) If there is an objective finding, such as a herniated disc, the defense attorneys argued that the condition was preexisting or that the plaintiff's doctors were not properly reading the diagnostic findings.

Our response to this tactic was always the same. First, we warn the jury in opening statements that they can expect to see the photographs blown up and pointed to time and time again. This prepares the jury for the evidence. More importantly, we do not run from the photographs.

We admit that there was minimal property damage. But instead of pointing endlessly to the literature that demonstrates a lack of a correlation, literature that bores a jury to tears and, while well-founded is counterintuitive to many jurors, we point out sometimes extraordinary injuries sometimes happen in ordinary accidents.

While such an occurrence is rare, it is often the rare cases that make it to the jury (as any first-year law student knows from the remarkable cases that find their way into their textbooks). From there, assuming the plaintiff is credible and has quality medical evidence to support his/her case, there is an excellent chance that a jury will award fair compensation for Plaintiff's injuries.

We should also remember that Mason does not stand for the proposition that pictures are automatically admitted into evidence under Maryland Rule 5-701. Rather, it is up to the judge's discretion in each individual case to determine whether the pictures would be of assistance to the trier of fact. Accordingly, you should still file a motion in limine to exclude photographs to the vehicles when appropriate.

More Information on the Admissibility of Car Accident Photos at Trial
Practice Areas
Client Reviews
★★★★★
They quite literally worked as hard as if not harder than the doctors to save our lives. Terry Waldron
★★★★★
Ron helped me find a clear path that ended with my foot healing and a settlement that was much more than I hope for. Aaron Johnson
★★★★★
Hopefully I won't need it again but if I do, I have definitely found my lawyer for life and I would definitely recommend this office to anyone! Bridget Stevens
★★★★★
The last case I referred to them settled for $1.2 million. John Selinger
★★★★★
I am so grateful that I was lucky to pick Miller & Zois. Maggie Lauer
★★★★★
The entire team from the intake Samantha to the lawyer himself (Ron Miller) has been really approachable. Suzette Allen
★★★★★
The case settled and I got a lot more money than I expected. Ron even fought to reduce how much I owed in medical bills so I could get an even larger settlement. Nchedo Idahosa
View More
Submit a Law Firm Client Review
Our Firm ›
Attorneys ›
Medical Malpractice ›
Personal Injury Practice ›
Communities Served ›
Injury Victim Help Center ›
Plaintiff Attorney Center ›
Insurance Company Insight ›