The History of Frederick County's Courthouses

The history is rich when it comes to Frederick County courthouses as the county has seen four. Nearly 270 years ago in 1750 three acres were purchased in Frederick City where the first courthouse and jail were built. It took six years to complete construction and in the Court's first year of operation, a historic judicial decision was made. In 1756, the Frederick County Court decided that businesses within the county did not have to comply with the British Parliament's Stamp Act. This was the first official repudiation of the Stamp Act among the colonies.

This courthouse saw many other notable events throughout history. In 1781, seven Tories, members of the British political party, were found guilty of treason and sentenced to hanging. In 1787, the second courthouse was built where people such as Francis Scott Key, John Hanson, and Roger Brooke Taney spoke. The courthouse even caught fire on two separate occasions. On the first in 1842, the fire was extinguished. On the second in 1861, however, the structure was burnt to the ground. This caused an uproar between opposing parties of the Civil War, each accusing the other of arson. 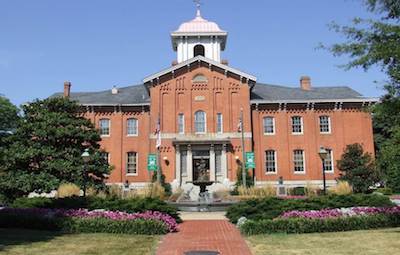 In 1864, a new courthouse was finally built. This courthouse is now Frederick City Hall. In 1922, William Stultz was sentenced to death here and executed for the murder of a Frederick City police officer at the jail. This was the last execution in Frederick since the state moved executions to a central location.

The courthouse currently used, being the fourth courthouse of Frederick County, was built in 1982. It was not until 1986 that the third courthouse was dedicated as Frederick City Hall. In 2000, an addition opened for partial occupancy is made to the current courthouse. As of present, the Circuit Court has been refurbishing furniture is the ceremonial courtroom to look like the former courthouse. This furniture dates to at least 1930. 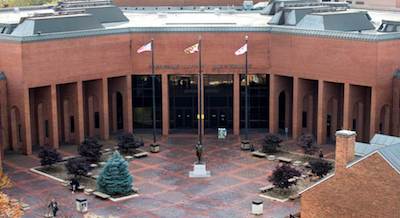 The current courthouse is located at:

Keep in mind that Maryland courts are set up a little differently than many other states. In Maryland, we have Orphan's, District, and Circuit Courts. The Orphan's court is specialized handling only wills, estates, and other probate matters and limited aspects of guardianship. The District Court is where most people experience the court system. Here, cases include misdemeanors like traffic violations and others as well as specified felonies, domestic violence, peace order petitions, landlord-tenant disputes, small claims and other civil cases involving limited dollar amounts and replevin actions for the recovery of wrongfully taken or detained goods. Cases in the District Court are only argued before a judge; there are no juries.

The Circuit Court is where more serious criminal cases and major civil cases such as juvenile and other family issues like divorce, custody, and child support are heard. Domestic violence cases are also heard here. Additionally, cases can be appealed from the District Court, Orphan's Court, and certain administrative agencies to the Circuit Court. Every county in Maryland and Baltimore City have a circuit court. Cases here are often in front of a jury but are also sometimes heard only before a judge. Decisions of the Circuit Court can then be appealed to the Maryland Court of Special Appeals and from there to the Court of Appeals.

If you are coming from the west on I-70, take exit 54 and make a right at the second light onto Route 355 Market St. At the fifth light, turn left onto W. Patrick St. Then, go one block and turn left onto Court St. From there, the Court is on the right.

If you are coming from the east on I-70, take exit 54 and make a right at the first light and at the next light make a left onto Market St. At the fourth light turn left on W. Patrick St. and go one block from there to Court St. and turn left. The Court is on the right.

Below are the Frederick Circuit Court Judges along with a link to their bios:

Keep in mind the courthouse is a secured building. This means you and any items you have will be screened before you can enter. You are permitted to bring camera cell phones and laptops. Complimentary Wi-Fi is also available. You are additionally permitted to bring food, drinks, and reading materials into the jury assembly room. This room is located on the second floor of the courthouse.

Jurors can have their parking expenses paid by the Court if they park in the West Patrick Street Deck located at 138 West Patrick Street. This deck sits directly to the left after passing the courthouse on West Patrick Street and is closest to the rear doors of the Courthouse. If you park here, be sure to bring your parking ticket with you into the jury room. For every day you are required to report for jury duty you will be paid $20. You also have the option of choosing to not be paid and can participate in the "Generous Juror" program.