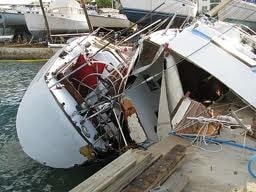 With the Chesapeake and its tributaries, Maryland has almost 3,000 square miles of water area within its borders and most of it is considered navigable. Thousands of us embark on boats, kayaks, and jet skis to fish or simply spend a summer day out on the water. With all this activity on the water, boating accidents are inevitable.

Maryland ranks in the 10 top states in the country for the number of boating accidents each year. Over the last five years, Maryland has had an average of 139 boating accidents annually. These accidents resulted in about 14 deaths per year, and many more injuries.

Most boat accident deaths could be prevented if those involved had followed basic safety rules like wearing lifejackets and only operating a boat when sober. Just like driving a car, operating a boat is a responsibility that must be taken seriously. 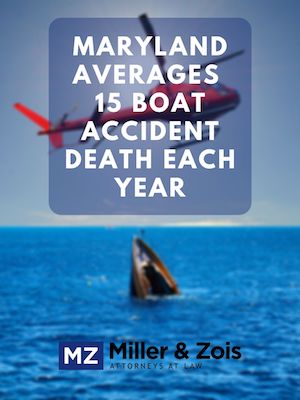 Most boat accident injuries are the result of collisions. Collisions on the water can occur with another boat, a fixed object, or accidental grounding. Boating collisions cause injuries and drowning from impact, falling overboard, and water flooding the boat. Other boating-related injuries include things like carbon monoxide poisoning from an engine or generator, water sports, fires, electric shock, and injuries associated with a boat's machinery and operation, such as being struck by a propeller.

According to data from the US Coast Guard, 4,168 boating accidents resulting in 613 deaths and 2,559 injuries in 2019. (2020 data is not yet available.) These recreational boating accidents accounted for $46 million of property damage. Almost all of the boat accident fatalities were the result of drowning by individuals who were not wearing lifejackets. Open motorboats, canoes, and kayaks were the most dangerous types of vessels. Additionally, operator inattention, improper look out, operator inexperience, machinery failure, and excessive speed were top contributors to accidents.

The Maryland Department of Natural Resources requires that all children younger than thirteen wear a personal flotation device-a lifejacket-while aboard a vessel less than twenty-one feet in length. Additionally, anybody being pulled behind a boat, such as a water-skier, must wear a life jacket. All recreational boats must be equipped with a lifejacket for every person on board in the correct size. Boats longer than sixteen feet must also carry a throwable flotation device, either a ring buoy or a cushion.

When boating on waters that are more than two miles wide, vessels are required to carry visual distress signals. Flares, flags, and lights are examples of signals that can alert passers-by and authorities that a vessel is in distress. Smaller, paddled boats must always have a flashlight and a whistle on board. Certain vessels are required to carry fire extinguishers.

Boats with inboard engines, closed living spaces, fuel tanks, and closed compartments that store flammable materials must carry fire extinguishers. These must be inspected monthly to make sure they still work. Boats powered by gasoline must have effective ventilation systems and flame arrestors.

Boats are required to be able to make certain noises, lights, and signals to communicate with other users of a waterway. They must also adhere to navigational rules, just like cars have to obey traffic lights and lanes on the road.

To get financial compensation for injuries in a boat accident you will need to prove that someone else was “at-fault” or legally responsible for the accident. Just like in auto accident cases, a defendant will be legally responsible if the plaintiff can establish the legal elements of negligence: (1) Duty; (3) Breach; (3) Causation; and (4) Damages.

(1) Duty
A plaintiff in a negligence claim must establish that the defendant owed him a duty of care under the circumstances. On the waterways, all boat and watercraft operators owe a duty of care to operate their vessel in a reasonably safe manner to avoid harm to others. This means the operator has to follow all the applicable boating safety rules and look out for other vessels. This is very similar to the duty of a motor vehicle driver to follow traffic rules.

Recreational boat owners may also owe to keep passengers and guests safe by maintaining their vessel in a safe condition, providing lifejackets, making sure guardrails are secured, and following other safety requirements. A boat owner’s duty to maintain a safe vessel is very similar to the duty of a property or store owner in premises liability cases.

(4) Damages
Finally, the plaintiff must prove that he or she was injured and incurred damages. Damages recoverable in boat accident cases are the same as they are for other personal injury cases: medical expenses, lost wages, and pain and suffering.  This is the battlefield where our personal injury lawyers shine: demonstrating the harms and losses suffered both to the defense attorneys during the litigation and to the jury at trial. 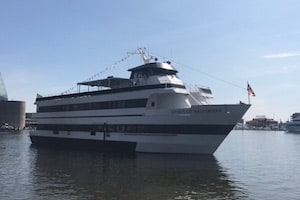 Cruise lines have the challenge of providing for the seaworthiness of an enormous vessel while also providing for the safety of passengers and crew members on long journeys. Cruise ship emergency systems, as well as living accommodations, have to be reasonably sufficient to prevent injury to their passengers. Common injuries that occur aboard cruises included swimming pool accidents, elevator or stair accidents, food poisoning, drowning, and assault by other passengers or crew members. Many cruise lines have fine print requiring civil suits to be filed within six months of when an injury occurred.

There have not been a lot of reported boat accident settlements in Maryland. Why don't we report our settlements? These companies settle with confidentiality clauses that make you practically give up your first-born child if you breach the confidentiality. Here are settlements in other jurisdictions to give some appreciation of the settlement value of these cases.

Get More Verdicts and Settlements
Does Contributory Negligence Apply in Boat Accident Cases?

Maryland's contributory negligence and assumption of risk doctrines do not apply if maritime law is applied to the case. Instead, a Maryland federal or state court hearing a maritime case would apply the doctrine of pure comparative negligence.

Is a Boat Accident Case Like Any Other Personal Injury Case?

Is There an Obligation to Report a Boat Accident in Maryland?

Any boating accident in Maryland that results in the death, disappearance, or injury of any person or in property damage of $2,000 or more must be reported to the Department of Natural Resources under MD NAT RES § 8-724.

Is There a Cap on Non-Economic Damages in Boat Accident Cases?

Those who operate or manage boats are responsible for doing so in a safe manner. When someone is injured because of another's unsafe boating practices, they may be able to seek compensation for the cost of their medical care, property damage, and other hardships.

Our Maryland law firm handle cases involving recreational boating accidents, maritime workers, and injuries on cruise ships and naval vessels. To speak with one of our lawyers, call us at 800-553-8082, or get a free, no-obligation consultation online.