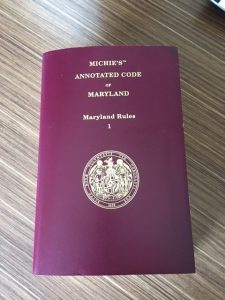 One thing we are seeing defense attorneys do more and more is using a Md. Rule 2-422 Request for Production to try to get plaintiffs to sign authorization forms permitting the defense to access medical and other information without a subpoena. For them, it’s a more efficient (some might say lazy) way to obtain the same material they could get by serving a subpoena on the person who has whatever records they want. For plaintiffs, it’s allowing the defense free license to root through anything they want without worrying about the protections afforded plaintiffs under the Maryland Rules and the Health-General Code.

Because we see this so often, I imagine there must be personal injury lawyers out there who allow their clients to sign them.  We have too, on occasion.  You want to be reasonable.  There are circumstances where there is wisdom in having the client to sign a defense authorization. In some cases, we don’t have a choice. In first-party claims against an insurance carrier for UM/UIM benefits, for example, the carrier often arguably has a contractual right to obtain an authorization written into the policy. Or if the records being sought are maintained out of state (and therefore outside the subpoena power of a Maryland court) we will often agree to an authorization, as long as it includes appropriate limitations that we have approved in advance, like excluding records about mental health, substance abuse, or STD/HIV/AIDS treatment. If they don’t agree to our requested conditions, they are welcome to get an out-of-state subpoena issued the hard way.

It makes no sense to make opposing counsel’s life difficult just for the heck of it.  But that is not what we are doing here. We cannot just give away our clients’ privacy protections under the law for no good reason, and that is what I would do by allowing my clients to sign these broadly-drafted defense authorizations.

Here is one of these requests that I just received, and my response:

Md. Rule 2-422 permits the use of a Request for Production to require a party to produce documents or other tangible things that are within that party’s “possession, custody or control.” In the case of a non-party, production of the same things may be required by serving the non-party with a subpoena duces tecum.

The case In Re: Special Investigation No. 244, 296 Md. 80, 459 A.2d 1111 (1983) is instructive on this point. There, a grand jury served a subpoena duces tecum on a non-party purporting to require the non-party to create and produce a list of the names of persons it employed during a particular time period.

The court held that the recipient of a subpoena may not be required to create a document, stating:

The grand jury may designate papers it wishes produced. It may query a witness or witnesses as to their knowledge of certain matters. It has no right, however, to request a witness to construct a document as has been done here.

Since Md. Rule 2-422 uses exactly the same language to describe what may be obtained by either a request for production or by subpoena, the argument is that if a subpoena can’t be used to require the creation of a document, neither can a request for production.  (Counterpoint: criminal cases are different.  Just sign the document.  Some judges will give just that order.)

Of course, the defense can always subpoena the records directly from the person who has them and can move to compel if they are not produced. Or they can use a request for production to require the plaintiff to obtain and produce the records, and seek sanctions if they do not. But under both of those approaches, the plaintiff retains their privacy protections permitting them to object and/or seek a protective order before the records are produced.

One out-of-state case that is instructive is Mutter v. Wood, 744 S.W.2d 600 (Tex. 1988).  In Mutter, the Texas Supreme Court found that the trial court abused its discretion by requiring the medical malpractice plaintiff to sign an authorization permitting the defendant-hospital’s attorney to discuss the plaintiff’s medical information with treating physicians because it would afford the defendants access to information that was not relevant to the underlying suit and thus remained privileged.  The take-home message? You do not give up all of your privacy because you were the victim in a personal injury case.