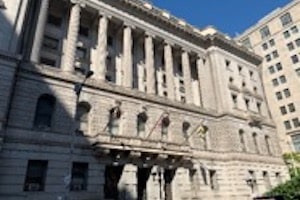 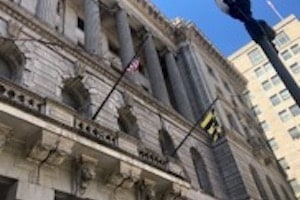 Mitchell Is an Amazing Courthouse

The building itself was originally constructed on an usually grand scale and cost for a state courthouse, a reflection of Baltimore’s booming economic prosperity at the time.

The white marble building sits on a granite foundation and the interior features mahogany paneling and mosaic tiled floors. The classic style marble columns at the Calvert Street entrance are some of the largest in the world at over 35 feet in height.

The interior also features one of the most ornate and impressive courtrooms in the country. The “Supreme Bench Courtroom” is a massive circular room with a coffered skylight dome supported by 16 elaborate marble columns.

Today, the Mitchell Courthouse is home to the Civil Division of the Circuit Court for Baltimore City. All types of civil cases such as personal injury, medical malpractice, breach of contract, and other non-criminal matters involving more than $30,000 are handled by the Civil Division.

Baltimore City is a very popular venue for plaintiffs in personal injury lawsuits, so the Civil Division is extremely busy.

Getting into the Mitchell Courthouse building is relatively straightforward. There is a main general public entrance at the very front of the building on Calvert Street. There are also entrances on Fayette and St. Paul but these are sometimes closed.

All visitors have to pass through a security checkpoint with metal detectors, but this never gets overly crowded like the entrance at Courthouse East. Once inside the Mitchell Courthouse, however, navigation become a bit more difficult simply because the building is so massive.

It is generally very easy to figure out what floor your courtroom (or other destination) is one, but once you get off the elevator it may take some effort and wandering to actually locate it. 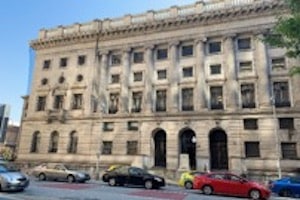 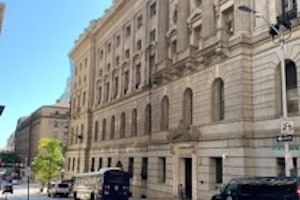 On the east side of Calvert Street is another massive 6-story building known as Courthouse East. This limestone building occupies an entire city block and was originally constructed by the Federal Government at the start of the Great Depression in 1932. From 1932 to 1975 this building actually served as the Federal Courthouse and U.S. Post Office for Baltimore. When the Federal Courthouse relocated to its current location on Lombard Street, the building was transferred to the state and repurposed for use as a new part of the Circuit Court for Baltimore City.

Courthouse East is currently home to the Criminal Division and the Family Division of the Circuit Court for Baltimore City. The Criminal Division has 2 Reception Courts which handle initial appearances, guilty pleas, postponement requests, and assignment of cases for trial. Courthouse East has 12 trial courts with cases assigned to different scheduling tracks based on the complexity and seriousness of the case. The Family Division handles divorce, child support and child custody matters.

Once you get past security at Courthouse East, the building itself it somewhat easier to navigate compared to the Mitchell Courthouse. One major drawback however is the outdated elevator system is not able to handle the volume of people coming into the courthouse at peak times. You often have to wait several minutes to crowd into an elevator which further slows things down.

Neither the Mitchell Courthouse or Courthouse East have public parking garages or any type of onsite parking at all. Visitors who drive to the courthouses have to find parking on their own. Finding street parking is not a realistic option, especially in the morning. Your only reliable option is to park in one of the many public parking garages with 2 blocks of the Court.

Below is a list of recommended parking garages and how much they cost.

The Circuit Court for Baltimore City conducts more jury trials (both criminal and civil) than any other court in Maryland. As a result, city residents are frequently summoned to appear for jury duty.

Once you check in for jury duty in Baltimore City,  you will watch a short video about the importance of jury duty and then wait to be called. Once called jurors will be sent to their assigned courtroom, which might be in either the Mitchell Courthouse or Courthouse East depending on what type of case it is.

Cell phones, tablets, laptops and other electronic devices are allowed in the Jury Assembly room.

All prospective jurors receive $15 (in cash) after checking in. Unfortunately, this is not even enough to cover the cost of parking and getting lunch. There are 4 parking garages that offer discounts to jurors who present a validated summons and juror badge upon exit. The cheapest discounted parking for jurors is $7 at the garage at 310 Guilford Avenue.