Just as protests over the death of George Floyd under the knee of a Minneapolis police officer were erupting around the country, Maryland’s Court of Appeals issued a very timely decision regarding a racially charged police shooting. In Blair v. David Austin, Maryland’s high court reinstated a $200,000 verdict against a Baltimore City Police officer who shot an unarmed black man during a 2015 traffic stop. Specifically, the court held that the Court of Special Appeals erred when it overruled a jury’s decision based on the court’s own independent evaluation of the video evidence. The court explained that whether a video shows excessive police force is a question for the jury, not the court.

This case arose from an all too familiar event.  My gosh, we are all sick of it.  In February 2015, Baltimore City Police officer attempted to pull over a man (with the last name Blair) for running a red light. Mr. Blair did not immediately pull over and ran another red light before eventually stopping on Freemont Ave. A nearby security camera recorded the stop. The video shows Mr. Blair gets out of his car and move toward Office Austin. 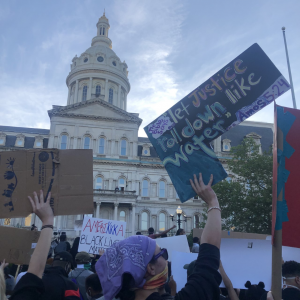 Our Paralegal’s Picture from Floyd Protests

In response, Officer Austin gets out of his patrol car (without his gun drawn) and instructs Blair to go back to his vehicle. Blair ignores the instruction and starts moving toward Office Austin at an even faster pace.  Office Austin draws his weapon and shoots Blair several times. Austin later claimed that Blair appeared to be reaching into his pocket for a gun, but this is not visible on the video and Blair did not actually have a weapon.

Despite being shot more than once, Blair did not remain down on the ground and was subdued with a taser by other responding officers. Mr. Blair survived his injuries, but a few months later he committed suicide while being held in Central Booking on bail. It is so unbelievably awful.

In 2016, Mr. Blair’s estate filed a civil suit against Officer Austin and the Baltimore City Police Department.  The lawsuit claimed that Office Austin used unreasonable and excessive force against Mr. Blair. The case went to trial in the Circuit Court of Baltimore City. At trial, Blair’s estate presented testimony from several fact witnesses as well as expert testimony regarding police tactics. The defense presented its own host of fact and expert witnesses. The key evidence, however, was the surveillance video of the shooting.

At the close of the trial, the defense moved for judgment as a matter of law (Md. Rule 2-519) because the Estate failed to present enough evidence to send the case to the jury. The trial court denied that motion and allowed the case to go to the jury. The jury determined that Officer Austin used excessive force and awarded $200,000 in damages. Officer Austin appealed.

What Did the Court of Special Appeals Hold?

On appeal, Maryland’s intermediate court reversed and held in favor of Officer Austin, based on its independent weighing of a single piece of evidence — the surveillance video. The court explained that:

when faced with a claim of excessive use of force by a police officer where reliable video evidence is available, appellate courts should not blindly adopt the interpretation promoted by either of the parties. Rather, an appellate court should view the facts in the light portrayed by the video.

The Court of Special Appeals based this position on a decision by the U.S. Supreme Court, Scott v. Harris, 550 U.S. 372 (2007). After deciding that it had the authority to make its own decision based on the video evidence, the COSA held that Officer Austin did not use excessive force and overturned the jury verdict.

What is the Holding of Maryland High Court in Blair v. Austin?

On appeal, the Maryland high court held that the Maryland Court of Special Appeals had no authority to replace the jury as the fact-finder in this case. The COA based this on the long-standing principle that neither the trial court nor the appellate courts are permitted to substitute their evaluation of the evidence for that of the jury. To do so would be an invasion of the jury’s province. Accordingly, an appellate court has no power to review the finding of the jury upon matters of fact. (citing Dennard v. Green, 335 Md. 305 (1994).

The Court explained that the COSA misapplied Scott v. Harris to support its own independent evaluation of the video evidence. In the Court’s view, Scott is factually distinguishable because it was decided in the context of summary judgment motions.

The Court went on to hold that legally sufficient evidence supported the trial court’s decision to deny Officer Austin’s motions for judgment and submit the case to the jury on the question of whether excessive force was used. The Court had little difficulty concluding that the Estate’s expert testimony regarding police tactics combined with the surveillance video was more than enough to support the judge’s decision to submit the case to the jury.

What Is the Lesson of Blair v. Austin?

This decision sets an important precedent, not just from a legal standpoint, but from a public policy perspective. Now more than ever, police brutality and police shooting cases have significant implications. Fortunately, with the emergence of body cams and surveillance cameras, most of these incidents will be captured on video. So who gets to watch the video and decide whether the police acted appropriately?

Allowing a jury of 12 community members to make that decision is obviously the best option and this decision helps preserve that. Overruling the COSA on this issue was necessary and appropriate. Allowing appellate court judges to second guess a jury’s decision with their own opinion in cases involving video is just not how the system is supposed to work.