Meconium is the baby’s first bowel movement. It is probably not what you expect. These first feces consist of debris, cells from the intestinal tract, mucus, and slimy fluids. Meconium is green and has no smell.

What is Meconium Aspiration Syndrome?

Meconium Aspiration Syndrome (MAS) causes respiratory distress as a result of meconium entering the respiratory tract below the vocal cords and presenting in the tracheal bronchial tree. When the baby makes an attempt to breathe in utero, before the baby is delivered, the baby can inhale meconium material into the lungs. The fear is the meconium blocking the airways.  Oxygen is critical to life for all of us.  But, during the birthing process, it is critical to have a smooth flow of oxygen to the brain and other vital organs.

This blocking of the airways decreases the flow of vital oxygen to the child’s brain and other vital organs. Usually, the neonate can provide a response to overcome the problem. But, if the MAS is severe, the respiratory system may not be able to handle it.  The result can be fetal distress from the oxygen loss if the infant cannot overcome the problem on its own. 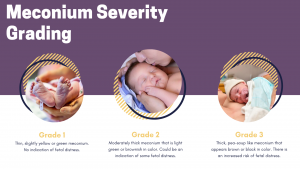 There is likely a serious meconium problem if the neonate needs assistance through mechanical ventilation. This is a sign of a potentially life-threatening situation.  At this point, the child is physiologically unstable.  Her oxygen, carbon dioxide, and blood pressure will often spiral out of control.  The child is also susceptible to air leaks called a pneumothorax (or collapsed lung).  The reality is that there are a number of other risks of being on a ventilator.  The correct treatment decisions are critical to minimizing the harm that can be done to the child.

Another risk factor is the amount and thickness of the meconium in the lungs.  The thicker the meconium, the more likely it is that the neonate will struggle to expel it.   So, the amount, density, and stickiness of meconium will more likely cause the child to develop severe meconium aspiration syndrome. If the infant is unable to clear the sticky thick meconium from his air passages and it is not removed for him, the risk of hypoxia and injury from the lack of oxygen is high.

An obstetrician has a lot of weapons to stop meconium aspiration syndrome in its tracks. Often, a suction tube placed in the infant’s trachea will suck out the meconium. Often, antibiotics, and possibly even a ventilator, are necessary after delivery. In 2018, therapy techniques such as inhaling nitric oxide (for pulmonary hypertension), surfactant administration, and extracorporeal membrane oxygenation (ECMO) are often brought into play.

But, meconium aspiration medical malpractice cases often result when the doctors do not see the signs that are apparent when dealing with MAS. When a baby is in distress for any reason, the obstetrician needs to act quickly.

If there is meconium present during childbirth, it is not a time to panic, but rather, it is a time to take action. The doctors and nurses should assume with a reasonable degree of medical probability that the baby has inhaled some of it. It is possible that the baby can expel the meconium on its own. But, even if this is the case, you still have to monitor the potential crisis very closely.

Often, this requires expediting the delivery process with a c-section. If the doctors and nurses miss or ignore the infant’s distress and the cause of the stress, then the result can be a tragedy that changes the child’s life forever. The umbrella term for these injuries is hypoxic-ischemic encephalopathy.  Severe meconium aspiration syndrome can cause permanent learning disabilities, permanent intellectual impairment, physical injuries, permanent psychological damage, and even death.

Getting a Lawyer for Your Birth Injury Case

If you believe that your baby may have suffered a birth injury and you believe meconium exposure may have been the reason for the harm, then give us a call.  We understand both what you have been through and what lies ahead for you and your child.  We have a clear history of success in wrongful death and catastrophic injury medical malpractice cases.  Call Miller & Zois today and speak to our birth injury medical malpractice attorneys at 800-553-8082 or get an online case evaluation.