Sexual assault or sexual abuse victims can bring a personal injury lawsuit in civil court against the perpetrator. Sexual assault lawsuits can also be brought against third parties such as schools, employers, churches, etc., if their negligence allowed the assault or abuse to occur. In this post we will explain how civil lawsuits for sexual assault work and how the differ from criminal proceedings.

Sexual assault or abuse is a serious crime and perpetrators can face criminal charges and potentially go to prison or face alternative criminal sanctions. Unfortunately, assault victims do receive any type of restitution in criminal proceedings against the offender. Sexual assault victims can get financial compensation (damages) for the assault by filing a civil lawsuit against the perpetrator or responsible third parties.

The amount of monetary damages or compensation that a victim can get in a civil lawsuit based on a sexual assault will depend on the specific facts and circumstances of the case. The amount of damages in sexual abuse or sexual assault cases is based on the physical and emotional harm (past and future) that the victim will suffer as a result of the assault. 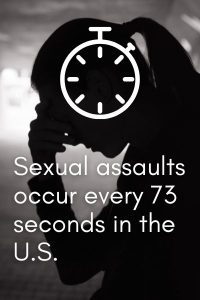 Damages can be awarded to the victim for the cost of any medical treatment that they received following the assault. This includes the cost of mental health treatment such as counseling. If the victim was unable to work as a result of the sexual assault they can recover damages for lost wages or lost income. Depending on the level of physical injuries involved in the case, these types of “economic damages” can add up to a significant amount.

Although sexual assault victims can get economic damages for the assault, so-called “non-economic” damages are usually more significant in sexual abuse cases. Non-economic damages can be awarded to compensate the assault victim for “pain and suffering.” This includes not just physical pain, but mental anguish and anxiety caused by the sexual assault.

Getting Money Out of a Perpetrator Can Be Difficult

Even if a sexual assault victim wins a civil lawsuit against the perpetrator, that just means that they get an order from the court instructing the abuser to pay a certain amount of money. Just because the defendant in a civil lawsuit is held liable and ordered to pay damages, this does not mean that the plaintiff automatically receives any money. Aside from ordering the defendant to pay, the court itself actually does nothing to enforce that order or ensure that the plaintiff receives payment.

When a plaintiff wins a civil lawsuit and gets a money judgment against the defendant, that plaintiff is own their own when it comes to collecting that money. If the defendant is an insurance company or a big corporation they will just pay the judgment voluntarily. However, when the defendant in an individual person that almost never happens. Most people simply don’t have any money or assets to pay for a big civil judgment.

This reality is something that sexual assault victims need to be aware of when they are considering whether to file a civil lawsuit. Unless the perpetrator is very wealthy, getting a judgment against them individually is probably pointless because you won’t be able to collect it.

This doesn’t mean civil lawsuits for sexual assault are worthless. The key to getting compensation in a sexual assault lawsuit is going after third parties that may have legal liability for the assault and the financial resources to pay any monetary judgment.

In many sexual assault or abuse cases, suing the perpetrator of the assault is not the only option. There are many circumstances in which a third party can be named as a defendant and held liable for sexual assault or abuse. If the incident occurred at a school, business, or church then those entities can potentially be liable under various legal theories including:

There are numerous examples of third party companies or institutions being held liable for sexual assaults committed by their employees. The most notable example are the sexual assault lawsuits involving catholic priests. Over the last decade, the Roman Catholic Dioceses and Archdioceses have paid hundreds of millions in compensation to victims who were sexually abused by priests as children.

More recently, rideshare companies Uber and Lyft have been named as defendants in numerous lawsuits in which drivers were accused of sexually assaulting riders. These lawsuits claimed that Uber and Lyft had liability because they either failed to do adequate background checks on their drivers, or they ignored complaints or warning signs.

The statute of limitations deadline varies for each state, but it is usually somewhere between 1 and 5 years from the date of the assault or abuse. In Maryland, sexual abuse or assault cases are subject to the general 3-year statute of limitations that applies to all tort claims. Md. Code Ann., Cts. & Jud. Proc. § 5-101.

There is a major exception to this rule if the victim is a child at the time of the abuse. If the victim is a minor, the statute of limitations on their civil lawsuit for the assault will not start to run until they reach the age majority (18). Under Maryland’s 3-year SOL for sexual assault claims, this means that when the victim is a minor they have until their 21st birthday to file a lawsuit, even if the abuse occurred when they were just 8 or 9.