Each birth injury malpractice lawsuit involves unique facts and circumstances, but they all go through the same process in the court system. Understanding this process and what to expect during each stage can help you feel more comfortable and eliminate some of the anxiety that often comes with being a plaintiff.

Before your lawyer can file a birth injury lawsuit, they will need to do some level of investigation into what happened to your child. This involves contacting the various health care providers that were involved in the delivery (hospital, OB/GYN, etc.) and requesting copies of all relevant medical records.

Getting the medical records related to the delivery (particularly the fetal monitoring reports) is absolutely critical because you won’t be able to file a birth injury lawsuit without them.

Before filing a birth injury lawsuit, your lawyer will need to get a written opinion from a medical expert (usually another OB/GYN) stating that medical negligence occurred during the delivery. This “expert certification” is a mandatory prerequisite to suing in all states. The only way to get an expert certification from another doctor is to have them review the medical records pertaining to the delivery. You can’t just tell them what happened.

Once your lawyer has completed the initial investigation and obtained the necessary expert certification(s), the next step is filing the actual birth injury lawsuit. Birth injury cases are a special type of medical malpractice lawsuit, but they follow the same procedure as other malpractice claims.

In Maryland, birth injury malpractice cases are initiated by filing a “complaint” in the Circuit Court for the appropriate county. The appropriate county for filing the lawsuit is usually based on the location of the hospital where the baby was delivered. However, any county where the defendant has an office or place of business is often acceptable.

For example, let’s say the baby was delivered at Johns Hopkins in Baltimore City and your OB/GYN has offices in Howard County and Anne Arundel County. Howard, Anne Arundel, or Baltimore are all possible venues to file your birth injury lawsuit.  In Maryland, the county in which you file your case can make a huge difference.

The complaint that initiates the lawsuit is basically just a written statement setting forth all the relevant facts relating to the case and articulating all your legal claims against the defendants. The complaint just contains allegations. It does not need to be supported by documents or other proof. This will come later. 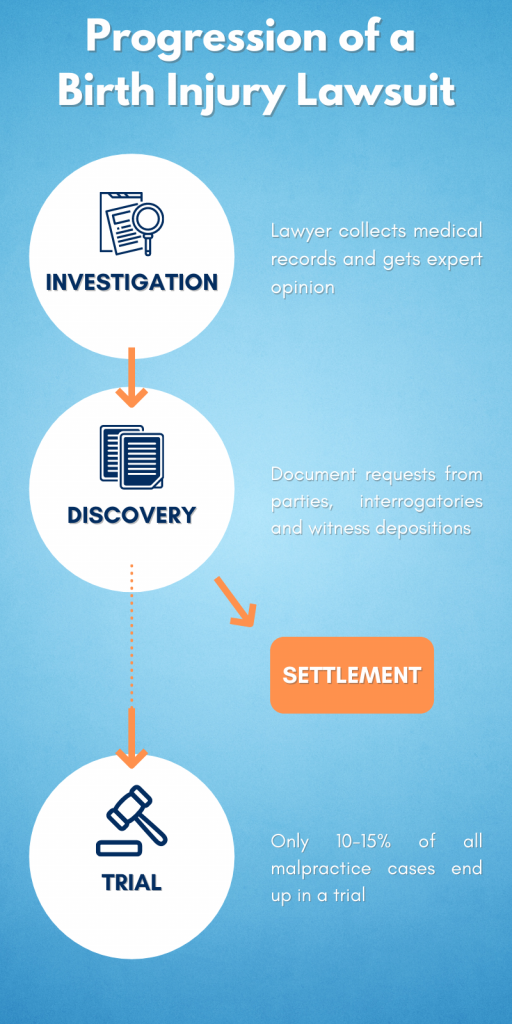 In some cases, a defendant might file a preliminary motion to dismiss the case against them right away.

Motions filed right out of the gate are usually procedural (lack of jurisdiction, failure to state a claim, etc.).

Once all the defendants have filed an answer the case will move into the discovery phase.

The discovery phase is where the opposing parties on both sides get the opportunity to extract facts, information, and evidence from each other. Forms of discovery include:

(ii) requests for documents to be produced (“RPD”)

Below is a chart with links to examples of interrogatories, RPDs, and videos of actual depositions in medical malpractice cases.

The discovery phase in a birth injury malpractice case can last anywhere from 16 to 30 months depending on various factors. The trial judge is charged with setting a discovery schedule with deadlines designed to keep the case moving.

Parents who are plaintiffs in a birth injury case can expect to have their deposition taken and will usually have to assist the lawyer in responding to some of the other discovery requests. Most of the time and effort in the discovery phase of a birth injury case is devoted to the opinions of expert witnesses for both sides.

The process of waiting for your case to settle or to get an offer can be agonizing for many plaintiffs.  This is particularly true for parents in a birth injury lawsuit because they are often desperate to get the financial resources necessary to give their child the highest level of care.

Unfortunately, working out a birth injury settlement is often a game of legal chicken that gets drawn out to the last possible minute. It is not uncommon for cases to settle on the morning before trial is set to begin. The pre-trial settlement time period after discovery usually lasts only a few months.

For those few cases that do not settle out of court, the next and final phase in a birth injury case is the trial. A typical trial in a birth injury malpractice case will last a least 2 weeks, and sometimes longer. The parents of the injured child will almost always be called to testify and the jury (or judge if a bench trial is elected) will also hear testimony from expert witnesses for both sides.