The saying is “accidents happen.” They do. But sometimes people are seriously hurt because of a fall that is someone else’s responsibility.  When this happens, the result is often a personal injury claim.

Despite safety innovations and a growing awareness of liability among property owners, “slip and fall” injuries are unlikely to disappear anytime soon. There are many misconceptions about these kinds of injuries and their value in Maryland courts.  While they can result in lucrative verdicts or settlements, it’s important to know the facts.

Say you’re walking through a parking lot and an uneven sewer grate sends you flying face first onto the asphalt. Or you’re shopping for groceries and a puddle of water from a leaking freezer makes you lose balance and shatter your hip.  What do you do?  Do you have any options to bring a claim against the wrongdoer who caused you to fall?   The post is intended to better help you understand the answers to these questions. 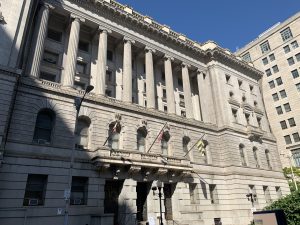 Any instance where a pedestrian falls because of an external issue with the walking area. This is usually referred to as a dangerous or defective condition. Common outdoor sources of slip and fall injury include ice-covered concrete, raised or uneven pedestrian walkways, and broken asphalt. Common indoor slip and fall hazards include liquid puddles, spilled food items, and unsecured rugs. Additionally, inadequate lighting, missing handrails, and excessively high/short stair steps are also routinely responsible for these kinds of injuries.

An individual can sustain many injuries in these kinds of incidents. Although minor soft tissue injuries such as bruising or sprains are the most likely, more serious conditions such as a concussion, wrist, hip, or ankle fractures and neck/back disc injuries are also common.

When is a Property Owner Liable?

When planning a lawsuit, it’s important to consider how a court could view your claim. Although slip and fall injuries occur every day, they aren’t the open and shut cases film and television so often make them out to be. Sure, a property owner is obligated under the law to provide a safe, hazard-free environment for customers or passersby. But Maryland law makes it tough on victims.  The most notable feature of Maryland’s slip and fall law is contributory negligence.  This doctrine is shared only by a handful of American jurisdictions.  Contributory negligence means that a business or individual can argue that you were at least somewhat responsible for your own fall, based on a variety of factors (a previous injury, existing knowledge of a defect, carelessness). So, and if you think this is ridiculous, it is because it is. If a judge or jury finds you are 1% at fault for your own injuries, you cannot win your case at trial.

Property owners shove this doctrine in plaintiffs’ lawyer faces every chance they get.  The truth is that sometimes they are successful with this defense.  But skilled lawyering can often find a path around the contributory negligence problem.

The next step is making an honest and comprehensive assessment of your financial damages as a result of your injury.  These are some of the key factors that drive the settlement value train:

Below are some sample verdicts and settlements that give you some idea of the valuation of slip and fall cases in Maryland.  Can they help you calculate the exact value of your claim?  Of course not.  The goal with all of this is to better help you understand the possible range of values for your claim.

A 40-something woman returned home to her apartment complex. She slipped and fell, sustaining an ankle fracture. Days later, she underwent open reduction and internal fixation surgery. After the surgery, she underwent physical therapy and steroid injections. Her expert testified that her injuries were permanent and limited her movement for life. She also testified that she served two overseas tours as an Army security guard and feared that she could not run if there was a dangerous situation. The case settled for $75,000. 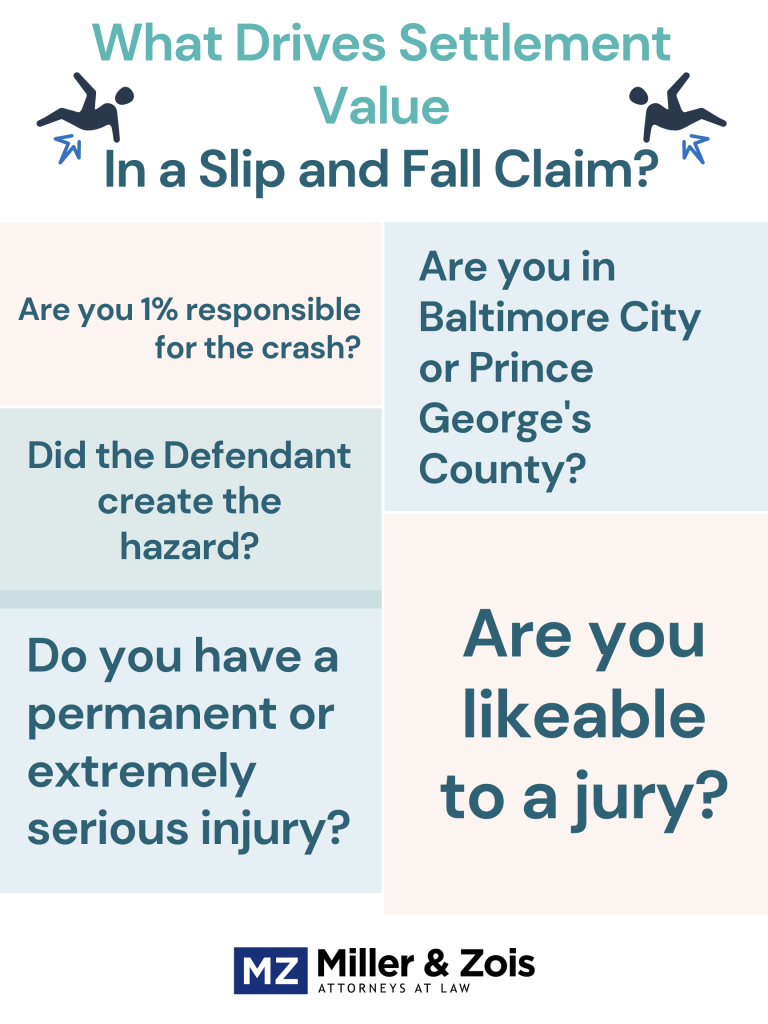 Plaintiff was grocery shopping at the Giant in Edmondson Village when he slipped and fell on an unmarked wet floor in the frozen food aisle. Store employees apparently were aware of the leak coming from a refrigeration unit because they apparently put boxes of items near the source in an attempt to stop it. In defense, Giant claimed that they put cones around the area that the plaintiff ignored. The case went to a jury and the plaintiff was awarded $10,000 (Ward v. Giant Food LLC).

Plaintiff was walking into the main lobby of the Residence Inn by Marriott in Greenbelt when she slipped and fell on untreated black ice in the entranceway. She claimed the hotel staff was aware of the ice and failed to address it. A jury in Prince George’s County awarded her $8,000 in damages.

Plaintiff was in a parking garage on East-West Highway in Silver Spring, and while she was walking down poorly lit stairs from the lobby, she tripped and fell.

A 33-year-old man leaned over a wooden safety railing to shake the dirt off a mat. The railing broke. The man fell 12 feet onto concrete. He injured his head, back, rib, hand, and shoulder injuries. Specifically, he suffered a rib fracture, hand fracture, scapula fracture, and fractured the transverse process in his back. He incurred $80,700 in past medicals.  His experts at trial testified that he would need $126,000 in future medical care.  His wife brought a loss of consortium claim.

The jury obviously did not buy this defense awarded over $1.3 million, which included a $200,000 loss of consortium verdict for the victim’s wife.

A 64-year-old plaintiff was attending a retirement party at a Baltimore City high school.  She tripped and fell and injured her right hip at the party.  She filed a lawsuit against the school system claiming the retirement/hospitality committee placed the red runner down on the floor without properly attaching or securing it to the floor.  The school argued she was contributory negligent which amounted to look where you are walking.  She claimed $53,000 in medical bills.

A 74-year-old customer shopping at a supermarket tripped over a large cart left on the ground by a store employee. The woman hit her head in the fall, sustaining a closed head injury requiring ongoing care. At trial, the customer alleged that the supermarket was liable for its employee’s negligence. Specifically, that the cart was left unattended in the deli area by an employee. The supermarket denied liability, arguing that the cart was left on the ground so that the employee could assist the plaintiff. The defense also argued that the plaintiff had poor vision because of cataracts and was not wearing her glasses at the time of the fall. The jury found the supermarket fully at fault and awarded the plaintiff $903,496 (reduced to $893,469 post-verdict to conform with Maryland’s cap on noneconomic damages).

Plaintiff claimed she slipped and fell on grease on a restaurant floor.  Plaintiff argued that the defendant like caused the condition and failed to inspect and maintain the restaurant. The better argument is that the defendant created the condition.  Why?  You do not want to get into a back and forth of speculation as to when the grease was dropped.  If it was dropped just moments before the fall by the patron, the restaurant would have a good chance of avoiding liability.   Plaintiff won this case. But it was not a large claim.  Plaintiff’s attorney asked for $35,000 and the jury awarded $25,000. You know my firm did not try this case because we would never file a lawsuit in Circuit Court and only ask the jury for $35,000.

Our client is this case slipped on the mat that sits outside of your shower in a hotel and suffered a herniated disc.  What helped us considerably, in this case, is that the hotel destroyed the mat.  The client was a good guy without a significant history of injuries.   I settled this case out-of-court without filing a lawsuit.

A Baltimore County school maintenance worker fell after entering a dark room containing electrical equipment. The worker had been ordered to enter the room and shut down an alarm. She stepped into a hole in the floor of the room, resulting in fall injuries to her right ankle and foot. The worker sued the electrical contractor who had created the hole, alleging their failure to cover the hole created a dangerous condition. At trial, the defense maintained that it had posted a warning sign in the room of the door. They further alleged that Baltimore County was negligent in allowing the room’s door to remain unlocked and that the worker assumed the risk of injury when she chose to enter. At the conclusion of the trial, the jury awarded the worker $537,365.18 in damages.  This was a Miller & Zois case tried by Laura Zois and me.

A woman tripped over a block of concrete used as a doorstop while attempting to enter a liquor store. She sustained injuries throughout her body and required surgery on her right shoulder and wrist. She also claimed that she would require future surgery because of carpal tunnel syndrome that developed in her left wrist. In her suit, the woman alleged that the area was poorly lit and that the concrete block blended into the nearby sidewalk. At trial, the owner/operator of the store denied any liability. They unsuccessfully moved to dismiss the case. The jury found in favor of the plaintiff, who was awarded over $18,000 in past medical expenses, $4,000 in future medical expenses, and $50,000 in non-economic damages.

A 72-year-old woman injured herself after she tripped outside a shopping center. She alleged that the fall was due to an uneven portion of the sidewalk. The plaintiff claimed a fracture to the distal radius of her right arm/wrist as a result of the fall. The defendants in the suit, a private business, and the city government, denied liability. Ultimately, the parties agreed to a $31,500 pre-trial settlement.

A 66-year-old woman slipped and fell while attempting to walk up steps leading into a retail store. She alleged that the icy steps caused her to fall, resulting in fractures of her distal fibula and tibia. At trial, the defense argued that the icy condition was obvious and that the plaintiff was aware of the potential danger the steps posted. The trial was bifurcated. The court found in favor of the plaintiff on liability. Before the damages portion of the trial could begin, the parties agreed to an $18,000 settlement.

Getting a Slip and Fall Lawyer in Baltimore

If you were injured in a fall and don’t believe it was your fault, you may be entitled to compensation. Contact Miller & Zois at 800-553-8082 or get a free online consultation.  Our firm only handles serious injury and wrongful death cases.