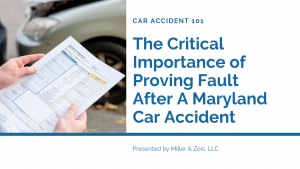 Our firm has handled thousands of Maryland car accident cases over the years. As discussed below, the law of negligence in Maryland is somewhat unique compared to most other states and it makes clear proof of fault for an accident more important.  This page will look at some of the unique features of Maryland auto tort law and how to properly manage them in order to recover money in an accident.

In Maryland, establishing clear, definitive fault after an auto accident is more important than in other jurisdictions. This is because Maryland is one of only a few remaining states in the country, which has an extremely onerous law called “contributory negligence.”

Contributory negligence means that if the other driver can prove that you had ANY fault in the accident, you cannot recover one penny from them. In other words, only those proven by good evidence to be totally innocent drivers or passengers can recover from other drivers on Maryland roadways (with some notable legal exceptions, described more below). This harsh and antiquated law can lead to tragic results.

For example, during an intersection collision, there are often competing opinions, from drivers, passengers, and witnesses, regarding who ran a red light, who was speeding, which car or truck was located where when the light turned from yellow to red, etc.  In those situations, lawyers from both sides can usually make strong arguments that the other guy or gal contributed in some way to the accident (e.g., our client ran the light, but your client was speeding).  If those arguments are successful, regardless of the severity of the accident or injuries, our client would recover nothing.  That means theoretically someone who was rendered a paraplegic, from a serious accident, with little true fault, might get no recovery (zero dollars).

Contributory negligence is correctly criticized as an outdated, harsh, and a totally unfair law.  The overwhelming majority of other states have much more favorable auto accident victim laws.

For example, in Florida (and 45 other states), car accident fault is determined by a different standard, called “comparative negligence.”  In those states, each driver is responsible for his or her percentage of fault (so a driver with 95% fault would have to pay 95% of the damages in a car accident).  However, in Maryland, the driver with 95% fault would pay nothing, because the victim with 5% fault would be barred from recovery under the contributory negligence rule.

Unfortunately, until Maryland lawmakers start caring more about auto accident victims, we are one of the few remaining states stuck with the outdated contributory negligence rule.

The good news is that there are important exceptions to the contributory negligence rule in Maryland.

Another exception involves seat belts.  I had this discussion with one of our clients just last week who foolishly was not wearing his seat belt and suffered serious injuries. Maryland requires that you and your passengers wear seat belts. However, contributory negligence cannot be based simply on a failure to wear seat belts.  If you weren’t wearing your seat belt, but your failure to wear your seat belt was the only way your actions contributed to your own injuries, the contributory negligence rule would not bar your recovery.

Another exception to the application of the contributory negligence rule in Maryland involves intentional acts. If there is good evidence that the other driver intentionally caused the accident, even if you share some blame, you would not be barred from recovery.

There are a few other very narrow exceptions, such as having a victim under five years old, or certain limited types of “strict liability” cases, which means a narrow class of cases where the legislature has determined that we do not have to prove fault.

We evaluate every potential case, very carefully, to determine whether one of Maryland’s exceptions to the contributory negligence rule might apply.

The ideal situation for proving that you had no fault involves rear-end auto accidents.  It is hard to find contributory negligence.  But defense lawyers do try, most often citing the “stopped short” defense.

In most (but not all) rear-end accidents, the rear driver has a very difficult time proving that the front driver had any blame for the accident.  Another best-case scenario involves passengers, who often did nothing wrong.  However, defense lawyers can be creative with arguments such as passengers who distracted their drivers, or front drivers (in rear-end collisions) who stopped too quickly.

What Does This Mean for Your Auto Case?

The most important lesson from Maryland’s contributory negligence laws is that ALL accident victims are in serious danger of recovering NOTHING from their case, without the help of a highly skilled and experienced auto accident trial lawyer.

To make matters worse, insurance companies always want to pay the least amount of money possible (with paying nothing at the top of their goal sheet). Insurance adjusters in Maryland routinely use the contributory negligence rule as a weapon to push down settlement values.  Therefore, it is extremely important that you contact an experienced trial lawyer quickly, and not speak with any insurance adjusters, to give us the best chance of securing the evidence you will need to prove you had no fault. 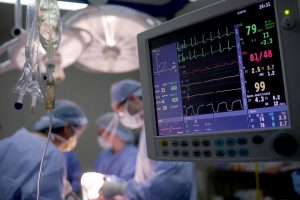 Auto accident lawsuits can be extremely technical and time-consuming, involving a complex interplay between your medical history and treatment, doctor opinions, the technical details of the crash, and what any witnesses might have to say.  We regularly spend hundreds of hours, and thousands of dollars, proving fault in the most serious and catastrophic Maryland auto accidents.  So you shouldn’t leave the outcome of your serious auto accident to chance or call just any lawyer. (Obviously, we can’t change the facts, so sometimes we have to decline cases, when we know, from experience that proving our client’s total lack of responsibility will be impossible.)

Particularly in serious accident cases, it is extremely important that you contact an experienced trial lawyer as soon as possible after an accident because critical evidence tends to disappear quickly.

Critical evidence might include things like witness statements, skid marks, vehicle photos (including the other vehicle), the actual physical vehicles themselves, vehicle black box data (which sometimes must be evaluated quickly by experts, before vehicles are destroyed), phone records, and many other details about the accident scene.

Because of the complexity of the issues, you should never try to resolve a serious or catastrophic auto accident case by yourself, by first trying to deal directly with the insurance company (without a lawyer).  If you do, you will probably speak with an adjuster who is highly trained to ask seemingly meaningless, innocent-sounding, or friendly questions, which are carefully designed with the specific goal of learning information that proves you share some fault for the accident (which, again, would reduce your recovery to zero).

We encourage you to review our results, including the multi-millions we have recovered for past clients, call us today for your free consultation. We are widely recognized as a leading Maryland auto accident law firm, based on our extensive work handling some of the most catastrophic injury and wrongful death cases. We will work fast to preserve necessary evidence in serious injury cases so that you have the best chance of proving you had no fault in the accident. If you have been injured in an auto accident call us today at 800-553-8082 or contact us online.

Note: This is the rare occasion when most of the content in this post was not written by me. The first draft of this post was written by my friend, Tina Willis.  Tina is a Partner at Tina Willis Law.  She is a great lawyer and a real advocate for her clients.  She handles serious injury and death cases in Orlando, Florida.