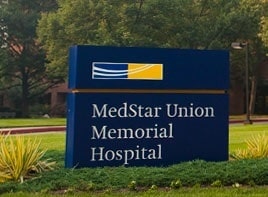 Since 2012, Union Memorial has been owned and operated by MedStar Health. MedStart is a large non-profit hospital and health system that operates 10 hospitals in Maryland and Washington, DC. MedStar has brought sophisticated, corporate structure and administration to Union Memorial resulting in many improvements.

Union Memorial Hospital is a medium sized hospital with 223 staffed beds. The hospital (through MedStar) employs about 650 physicians and over 2,500 professional and non-professional staff. Union Memorial is mostly known for its orthopedics - which has some of the best doctors in the world - and cardiac care departments. It also has a general surgery department and emergency medicine services.

The hospital sees over 58,000 emergency room visits per year and brings in over $400 million in revenue. Recently, Union Memorial opened a helipad for transport of emergency trauma patients which is obviously a big deal in getting serious injury patients treated quickly.

When you sue Union Memorial you are suing its parent company MedStar Health. Most hospitals are highly motivated to settle medical malpractice claims to avoid negative press that might harm the hospital’s public image. MedStar is a little more willing to challenge plaintiffs and take cases to trial, but they are still more likely to settle a valid claim compared to a doctor. MedStar is self-insured so they have the freedom to settle cases without any approval from an insurance carrier or concern with how a settlement will impact their malpractice rates.

As part of the MedStar system, Union Memorial Hospital is usually defended by Goodell, DeVries, Leech & Dann, one of the premier medical malpractice defense firms in Maryland. It has also been defended by lawyers from the Rockville firm of Gleason, Flynn, Emig & Fogleman; and Wharton Levin Ehrmantraut & Klein in Annapolis.

Below are recently filed lawsuits against Union Memorial and a summary of the allegations in the claims.

The first step in determining whether you have a medical malpractice case is for you or your lawyer to obtain your medical records. Hospital records from Union Memorial can be retrieved from:

Just like any busy, urban hospital, Union Memorial gets named as a defendant in a number of medical malpractice cases every year. Union Memorial does not get sued for malpractice more frequently compared to other hospitals of comparable size.

How Many Hospitals Does MedStar Operate?

MedStar, a not-for-profit health system that currently owns and operates 10 hospitals. 8 of MedStar’s Hospitals are in Maryland and 2 are located in Washington, DC. MedStar health also has a number of outpatient facilities in the Maryland and DC area.

Is MedStar Difficult to Deal with In Medical Malpractice Cases?

In our experience, MedStar is a little more willing to be aggressive in defending questionable malpractice cases than other hospitals. However, just like most hospitals, MedStar is concerned about public image and is eager to settle valid cases to avoid negative publicity from a large verdict.

Does Union Memorial Have In-House Attorneys?

Union Memorial is part of MedStar Health. MedStar has an in-house counsel department with a handful of lawyers. In-house attorneys at MedStar do not defend medical malpractice cases themselves. They hire and supervise outside counsel to defend them in malpractice cases.

If you believe that you have a medical malpractice lawsuit against Baltimore's Union Memorial Hospital or any other hospital in Maryland, contact our medmal lawyers at 1.800.553.8082, or send us a free internet request for consultation.

Medical Malpractice in Other Maryland HospitalsHospital Specific MalpracticeEmergency Room Malpractice
Medical Malpractice
Client Reviews
★★★★★
They quite literally worked as hard as if not harder than the doctors to save our lives. Terry Waldron
★★★★★
Ron helped me find a clear path that ended with my foot healing and a settlement that was much more than I hope for. Aaron Johnson
★★★★★
Hopefully I won't need it again but if I do, I have definitely found my lawyer for life and I would definitely recommend this office to anyone! Bridget Stevens
★★★★★
The last case I referred to them settled for $1.2 million. John Selinger
★★★★★
I am so grateful that I was lucky to pick Miller & Zois. Maggie Lauer
★★★★★
The entire team from the intake Samantha to the lawyer himself (Ron Miller) has been really approachable. Suzette Allen
★★★★★
The case settled and I got a lot more money than I expected. Ron even fought to reduce how much I owed in medical bills so I could get an even larger settlement. Nchedo Idahosa
View More
Submit a Law Firm Client Review