Erie Insurance Group, named for its hometown in Pennsylvania, operates in the District of Colombia and twelve US states, including Maryland. The public insurance company offers home, commercial, auto, and life insurance policies. Founded in 1925, Erie was first listed on the Fortune 500 list in 2003 and ranked 381st in 2019. Erie is the 5th largest auto insurer in Maryland with 7.89% of the market share.

In recent news, Erie announced in April 2020 that it was reducing rates and paying dividends to its auto insurance customers during the coronavirus crisis. The $400 million relief plan is sensitive to the fact that its customers are driving less during the lockdown. Checks will be mailed directly to its insureds in May. It also donated $2.5 million to its agents to finance their support of local charities.

This extra effort is one of the reasons why Erie has consistently ranked high on customer satisfaction in J.D. Power studies. However, car accident victims with Erie collision insurance are more interested in what Erie is like on a practical level in the claims process.

On this page, our auto accident lawyers share their experiences and thoughts on working with Erie Insurance. As a car accident victim or attorney, understanding who you are up against is key to maximizing your insurance check for your personal injury case. Follow the links below if you have specific questions.

Commonly Asked Questions
What is it like to settle with Erie Insurance?

Erie Insurance is certainly not the worst insurance company for victims to go up against in personal injury auto accident cases. Erie settles the lion's share of its cases and is often very reasonable about settlement value after a lawsuit is filed.

However, in large cases when the Erie insurance policy is worth millions of dollars, Erie agents still make settlement offers closer to the size of their midsized policies. Our Erie claims lawyers recently received a pretrial offer of $800,000 from Erie when the case was sure to be worth $2 million at trial, even taking into account Maryland's cap on non-economic damages. We are unsure why Erie offered $800,000 in this wrongful death case that involved significant pain and suffering and two wrongful death beneficiaries. Erie may have needed to see a lawsuit actually be filed or have more time to figure out the case.

Like most insurance companies, Erie will dramatically increase its settlement offer after a lawsuit has been filed. This applies in particular in Baltimore City and Prince George's County, Maryland's two best jurisdictions for victims. This insurer is often motivated to settle after a lawsuit is filed because it cares more than most insurance companies about its litigation costs.

“Erie settles most cases, but will dramatically increase its settlement offer after a lawsuit has been filed.”

Erie is not a bad insurance company to have as an adversary compared to many other insurance companies. But, this insurer has certainly had its fair share of ridiculous coverage denials. The good news is that Erie puts more money on the table after a suit is filed.

Erie, too, will sometimes surprise us with a reasonable settlement offer before a lawsuit is filed. The take-home message is that it’s hard to know what Erie will offer in any given case.

How does Erie go about valuing claims for settlement purposes?

Like some other insurance companies, an Erie insurance adjuster will use a computer-based program called Colossus to assist in valuing accident claims. The computer tries to evaluate how much someone has suffered and has had to endure as a direct result of the crash—an impossible task for a computer that tries to be a personal injury settlement calculator.

This is another reason why lawsuits are usually the best path to maximize the value of your lawsuit with Erie. An Erie adjuster, to their credit, will look at claims with a different and less computerized eye after a lawsuit is filed.

Who are Erie’s lawyers?

Erie Insurance Group does not have in-house counsel in Maryland or Washington, D.C. The company pays lawyers by the hour, or sometimes with a flat rate, to defend cases in Maryland.

Erie often relies on Rollins Smalkin in the Baltimore area and McCarthy Wilson in Baltimore and much of the rest of Maryland. These are not in-house company employee lawyers. They have also used Wilson-Forte, a break off of McCarthy Wilson.  These attorneys bill by the hour. Unlike State Farm or Allstate, Erie keeps this in mind when a lawsuit is filed.  Because the attorneys' fees they incur are very real to Erie.

Though Erie Insurance claims are not handled all that differently from other insurance companies once they go into suit, Erie is somewhat more receptive to settling cases for a reasonable number after their lawyers get involved. This is probably because the lawyers who have to try the case are more realistic about the settlement value of the claim. Avoiding higher legal bills also likely has something to do with this.

Erie’s attorneys have told us that "Erie Insurance Group" is a tradename and that they should be sued as "Erie Insurance Exchange." Erie’s claims support phone number is (800) 367-3743. After you file a claim, an insurance adjuster will contact you.

When you sue Erie in Maryland, you serve: 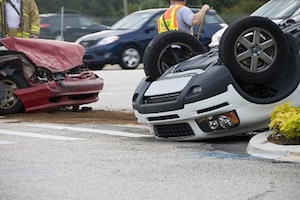 Below are reported settlements and verdicts in which Erie Insurance was the insurance carrier or defendant. We think jury awards and settlement data in specific cases help both attorneys and victims get a handle on what a specific case is worth. It is also useful to show these verdicts to claims adjusters to make sure they are educated as to how other similar cases have fared.

That said, keep these awards in perspective. Our attorneys have not included every verdict we have had or that we have uncovered involving Erie. Instead, these are a selection of cases won by plaintiffs. One thing to notice: Erie does not try a lot of cases, at least not in Maryland.

Erie Car Crash Settlements and Verdicts Outside of MarylandHire a Lawyer

Our car crash attorneys have fought and won millions of dollars in insurance claims against Erie. We are experts in every step of the claims process. If you need an experienced advocate to fight for you after a severe car wreck injury case, call our attorneys at 800-553-8082 or get a free online case evaluation.

More information
Erie: Auto Accident Claims and Settlements
Client Reviews
★★★★★
They quite literally worked as hard as if not harder than the doctors to save our lives. Terry Waldron
★★★★★
Ron helped me find a clear path that ended with my foot healing and a settlement that was much more than I hope for. Aaron Johnson
★★★★★
Hopefully I won't need it again but if I do, I have definitely found my lawyer for life and I would definitely recommend this office to anyone! Bridget Stevens
★★★★★
The last case I referred to them settled for $1.2 million. John Selinger
★★★★★
I am so grateful that I was lucky to pick Miller & Zois. Maggie Lauer
★★★★★
The entire team from the intake Samantha to the lawyer himself (Ron Miller) has been really approachable. Suzette Allen
★★★★★
The case settled and I got a lot more money than I expected. Ron even fought to reduce how much I owed in medical bills so I could get an even larger settlement. Nchedo Idahosa
View More
Submit a Law Firm Client Review
Our Firm ›
Attorneys ›
Medical Malpractice ›
Personal Injury Practice ›
Communities Served ›
Injury Victim Help Center ›
Plaintiff Attorney Center ›
Insurance Company Insight ›