Below is a list of herniated disc verdicts and settlements in Maryland. Many of these are cases that we at Miller & Zois handled. Others are pulled from jury reports or are verdicts of friends and colleagues.

The theory is that you can match up your case with these to figure out a range of values for your claim. But keep in mind that it is hard for anyone to ascertain the value of individual cases without reading and understanding all of the nuances contained in your medical records and learning all of the details about your particular case. 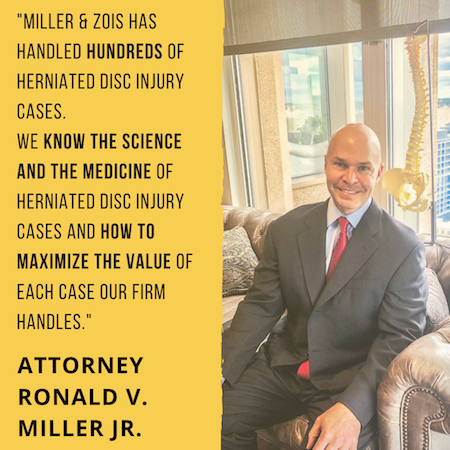 This video really breaks down how herniated disc cases are valued in Maryland by looking not only at the injuries but the specific jurisdictions in Maryland and how that impacts settlement value.
More Information on the Value of Herniated Disc Cases
Practice Areas
Client Reviews
★★★★★
They quite literally worked as hard as if not harder than the doctors to save our lives. Terry Waldron
★★★★★
Ron helped me find a clear path that ended with my foot healing and a settlement that was much more than I hope for. Aaron Johnson
★★★★★
Hopefully I won't need it again but if I do, I have definitely found my lawyer for life and I would definitely recommend this office to anyone! Bridget Stevens
★★★★★
The last case I referred to them settled for $1.2 million. John Selinger
★★★★★
I am so grateful that I was lucky to pick Miller & Zois. Maggie Lauer
★★★★★
The entire team from the intake Samantha to the lawyer himself (Ron Miller) has been really approachable. Suzette Allen
★★★★★
The case settled and I got a lot more money than I expected. Ron even fought to reduce how much I owed in medical bills so I could get an even larger settlement. Nchedo Idahosa
View More
Submit a Law Firm Client Review
Our Firm ›
Attorneys ›
Medical Malpractice ›
Personal Injury Practice ›
Communities Served ›
Injury Victim Help Center ›
Plaintiff Attorney Center ›
Insurance Company Insight ›