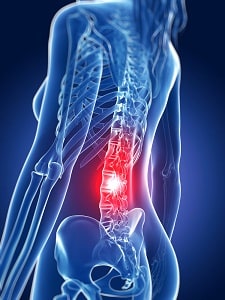 A man visited the emergency room at Potomac Valley Hospital with complaints of back pain. He was discharged the same day with prescriptions for pain medications. Two days later, the man went to the Western Maryland Hospital (WMH) emergency room, where he reported worsening pain, numbness, and tingling from the waist down. Even though a CT scan revealed a disc herniation at L4-L5 causing severe stenosis (narrowing) of the central spinal canal, the man was discharged after only a few hours.

After another two days, the man returned to WMH via ambulance, complaining of increasing back pain radiating down through his legs and an inability to urinate. MRI results were concerning for cauda equina syndrome, which would explain his pain, numbness, and neurogenic bladder.

The man was transferred to West Virginia Hospital where he underwent surgery for his disc herniation. Unfortunately, the surgery was performed too late to prevent the permanent neurological complications of a delayed cauda equina diagnosis. Postoperatively, the man developed right foot drop and his incontinence continued.