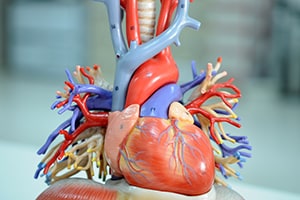 A man with a long history of heart problems underwent a single-vessel coronary artery bypass graft (CABG) to repair his left ventricle. After a prior heart attack, muscle in the left lower chamber of the man's heart weakened and bulged, decreasing his overall heart function. His physician attempted to improve his blood flow by performing a type of open-heart surgery.

CABG surgery involves surgically grafting a vessel from the aorta to a coronary artery to bypass the blood flow around one or more narrowed vessels. So the plan for this patient was to take a healthy artery from another part of the body and sew it to the damaged artery, giving the blood a more effective avenue to pump through the heart. In order to bypass the damaged area of the ventricle while still maintaining proper heart function, the doctor was supposed to attach the man's left internal mammary artery (LIMA) to his left anterior descending artery (LAD). Instead, he mistakenly attached the LIMA to the great cardiac vein.

After surgery, the man began experiencing extreme fatigue, shortness of breath, and unusually labored breathing. The man attended numerous cardiac follow-up visits over the next several months, but his physician was never able to determine the source of the postoperative symptoms.

Eventually, the man's new cardiologist ordered a cardioverter defibrillator check and cardiac catheterization to further investigate his continued symptoms. Nearly four years after the negligent CABG surgery, these tests finally revealed that the man's LIMA was connected to a vein rather than the appropriate artery. Shortly thereafter, the new cardiologist performed a successful repair surgery.