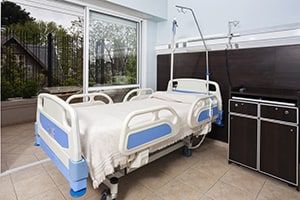 This nursing home wrongful death claim was filed in Baltimore City after a woman suffered a hip fracture and gangrene as a result of inadequate and inattentive care. It was filed in Health Claims Arbitration on March 12, 2018, and it is the 119th medical malpractice case filed in Maryland this year.

At some point over a three-day period, a resident of Long Green Center assisted living facility suffered a hip fracture. No one is sure when exactly the woman fractured her hip because the care providers did not record the injury in any of their records. Because the woman was not independently mobile, the injury must have occurred, according to plaintiff's lawyer, while care providers were attempting to move her.

The hip fracture likely happened when the woman was transported back from Good Samaritan following a brief hospitalization. If the injury did occur at that time, then the woman suffered the pain of a major bone fracture for two or three days without treatment. Once the nursing staff finally reported the injury, the woman was transported back to Good Samaritan Hospital. At the time of the woman's discharge, her daughter arranged for her to move to Futurecare Cold Spring.

After residing at her new nursing home for a short time, the woman developed gangrene because the nursing home personnel were not properly cleaning her wounds. Several months later, the woman passed away.