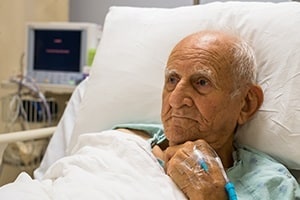 After undergoing an elective knee replacement surgery, a woman became mildly hypotensive. A nurse in the post-anesthesia care unit noticed the woman's low blood pressure and requested that a doctor prescribe Ephedrine.

Shortly after a doctor ordered five milligrams of Ephedrine for two doses, a different nurse mistakenly administered Epinephrine instead of Ephedrine. The woman's heart rate and blood pressure immediately rose. She also began to cough and complain of nausea.

The doctor who prescribed the Ephedrine returned to the woman's bedside and determined that she had developed severe hypertension and ventricular tachycardia. He prescribed Esmolol to treat the woman's heart rhythm problems and, after questioning the nurse, discovered the mix-up.

Even after the woman's heart rate returned to normal, her condition continued to deteriorate as a result of the hypertensive episode. She developed Takotsubo cardiomyopathy, requiring critical care and cardiac catheterization. An MRI of her brain also showed a small stroke in the right occipital lobe of the brain.

Ultimately, a prescription reading error caused the woman to suffer a dangerous swing from hypertension to hypotension, a stroke, cognitive damage, and heart damage.