Our law office gets a lot of calls involving pharmacy and anesthesia errors involving either the administration of improper medication or the failure to administer medication. It is not surprising, given that an astronomical 1.5 million people every year are victims of medication errors, according to a report by The Institute of Medicine of the National Academies.

More people die annually from medication errors than from on the job injuries, according to the National Coordinating Council for Medication Error Reporting and Prevention.

Fortunately, most of these injuries - particularly the pharmacy misfills - are benign, but pharmaceutical medication errors still account for almost a quarter of medical malpractice cases.

Who is making these mistakes? There is a lot of blame to go around. Doctor, nurses, and pharmacists are all frequent defendants in these cases.

The most common types of drug medication cases we encounter are:

The first thing to keep in mind in these case The improper medication cases in this country that go to trial often tough cases either or negligence or causation. The best cases for the plaintiffs are improper dosage cases in which, according to Jury Verdict Research, the injury victim prevails 40% of the time at trial. The most difficult cases for plaintiff’s medication error lawyers to prevail are inappropriate medication cases; plaintiffs prevail in 23% of these cases.

With respect to verdicts, the median verdict in medication error cases is $250,000. But this underscores that a lot of prescription error lawyers are willing to take smaller cases (our law firm only handles serious injury and death cases). Average settlement for medication errors are pretty misleading.  A much different way to look at these numbers is that 60% of medication error cases result in a jury verdict over $1,000,000.

Wrong Prescription and Other Medication Error Verdicts and Settlements
These are typical medication error stories along with the results the victim obtained for the harm done to them at the settlement table or at trial. 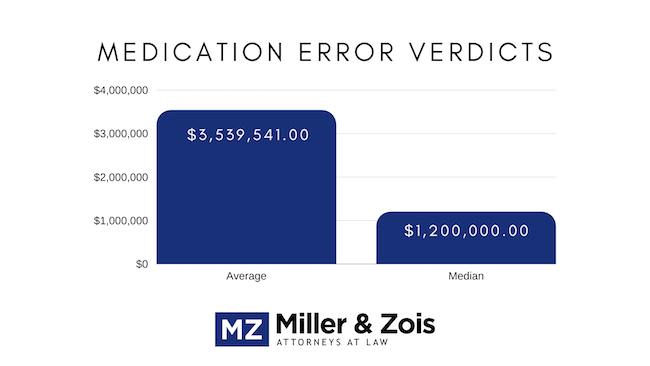 You are probably wondering where are the Maryland verdicts are. For whatever reason, these cases do not seem to go to verdict in Maryland, at least not in recent years.

Keep in mind that while these verdicts are great tools for understanding the value of these cases, they are just one tool that used alone is relatively meaningless. There are too many variables that go into a jury's thinking on these claims and these short summaries - that picked over a lot of defense verdicts - cannot provide.

Below are examples of recently filed medication error malpractice lawsuits filed in Maryland with the story behind the claim.

How Much are Medication Error Malpractice Lawsuits Worth?

What Is the Most Common Type of Medication Error Malpractice?

What Are My Chances of Winning a Medication Error Malpractice Case?

Overall, medication error cases have a slightly higher success rate compared to general medical malpractice cases. Over 90% of medication error cases result in an out-of-court settlement and less than 10% go to trial. For those that go to trial, plaintiffs win about 35% of the time.  Many of these losses at trial for victims is not because they cannot prove a medication or pharmacy error but because they cannot prove the harm that was done came from that medication mistake.  Still, this is about 15% better than the winning percentage at trial for plaintiffs in general medical malpractice cases.

Can I Sue My Pharmacy for Giving Me the Wrong Prescription?

What Is the Highest Settlement or Verdict Your Law Firm Has Obtained in a Medication Error Case?

The highest verdict our law firm has obtained for a client in a medication error case was $10 million. In that case, the doctor simply chose the wrong medication for the patient in light of his condition and it caused his death.

If you have a prescription error case, call one of medication error lawyers at 800-553-8082 or click here for a free Internet consultation.

More Resources for Medication Error Lawsuits
Medical Malpractice
Client Reviews
★★★★★
They quite literally worked as hard as if not harder than the doctors to save our lives. Terry Waldron
★★★★★
Ron helped me find a clear path that ended with my foot healing and a settlement that was much more than I hope for. Aaron Johnson
★★★★★
Hopefully I won't need it again but if I do, I have definitely found my lawyer for life and I would definitely recommend this office to anyone! Bridget Stevens
★★★★★
The last case I referred to them settled for $1.2 million. John Selinger
★★★★★
I am so grateful that I was lucky to pick Miller & Zois. Maggie Lauer
★★★★★
The entire team from the intake Samantha to the lawyer himself (Ron Miller) has been really approachable. Suzette Allen
★★★★★
The case settled and I got a lot more money than I expected. Ron even fought to reduce how much I owed in medical bills so I could get an even larger settlement. Nchedo Idahosa
View More
Submit a Law Firm Client Review