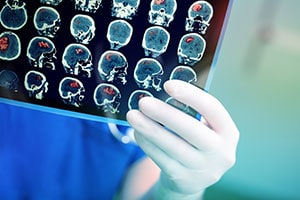 A man presented to Johns Hopkins Hospital for an elective embolization procedure to block the blood vessels feeding a tumor in his brain. More specifically, the tumor was a "parafalcine meningioma," meaning that it was growing on the meningioma tissue that covers the brain and spine. Meningioma is a neurological disease that can often cause symptoms by compressing and damaging brain tissue or cranial nerves. In addition to the embolization procedure, the man was also scheduled for a craniotomy to remove the tumor the next day.

When he awoke after the embolization procedure, the man was unable to speak or follow commands and had limited movement in his arms and legs. His doctors believed he suffered a stroke. A CT scan showed hyperdense material in his left frontal lobe and an MRI showed a lack of flow within the cortical branch of the middle cerebral artery. The obstructions in both images were caused by the embolization material - an outcome that should not have occurred with proper embolization technique and monitoring. Five days later, when the man was discharged to acute rehabilitation for therapy, he was able to move his arms and legs but his speech and cognition were still affected.

The surgery to remove the tumor from his brain was postponed for four months. By the time the surgery took place, the man was still having severe difficulties with his speech and cognition, although his physical strength had improved. After the craniotomy, the man had trouble with physical tasks including walking and mobility, so he began physical therapy at Hopkins.

Contrary to the standard of care, the Hopkins physical therapist had the man do leg presses with 70-150 pounds. This amount of weight is excessive for a patient recovering from an open craniotomy. As a result, the man's status continued to decline. He was later transferred to a different rehabilitation facility, but he never fully recovered from the substandard physical therapy. Currently, the man has difficulty with communication and word finding. He cannot walk, hold a proper conversation, or live independently.