This page is about medical malpractice lawsuits against nurses.  Our lawyers discuss how these nursing negligence claims are brought and we discuss settlement compensation payouts and verdicts in legal cases against nurses.

A nurse commits malpractice in Maryland when she fails to do what a reasonable, prudent nurse would do and the patient suffers harm as a result.

Every nurse must demonstrate the knowledge, skill, care, and diligence that you would expect from a nurse. If a nurse does not do so and harm is caused, the nurse is responsible. In the practical world, this means her medical insurance, the doctor's practice, or the hospital will be responsible for the harm.

Most medical malpractice cases are directed at physicians. But the care that a nurse gives can be critical. If the nurse makes a key mistake, such as giving the wrong drug or the wrong dosage of a drug, or fails to monitor a patient or notify a doctor of a concern, then a negligence claim may arise against that nurse.

The role of a nurse in our health care system has been remarkably recast in recent years. Nurses are expected to carry the patient care ball in ways that were not expected 50 years ago.

There are lots of different types of mistakes that a nurse can make that can get people hurt or killed. But in the vast majority of serious injury or death cases, two types of mistake make up the lion's share of legal cases against nurses

Common Mistake #1: Not Getting the Medication Right

Nurses are required to do a lot of very difficult jobs. Getting the medication right is not one of them. It is the doctor's job to pick out the right medicine. It is the doctor's job to pick the right dosage. All the nurse has to do is follow the instructions. But in alarming numbers, nurses do not get it right. These three three mistakes are common themes in can get a patient hurt or killed:

Three things must be shown to successfully bring a malpractice claim against a nurse.

The first is duty. This is rarely an issue in malpractice cases against nurses. Either the nurse was treating the patient or not. None of our lawyers have ever seen or even heard of a Maryland case where this was a big issue.

Second, the patient has the burden of demonstrating that the appropriate care was not given. In Maryland, this is typically done through the expert testimony of a nurse who can tell the jury what knowledge, skill, care, and diligence the nurse should have demonstrated and how and why it was not demonstrated in this case. Another way of looking at this is that the nurse departed from “good and accepted practices."

Third, there was a nexus between the harm that was caused and the mistake that was made. In other words, the mistake causes injury or death. In many nurse malpractice cases, this is a real issue. This is particularly true when we have the nurse dead to rights on negligence. So they argue, "It would have happened anyway."

In Maryland, we usually will need a medical doctor to make our case and rebut the argument, if it is made, that the harm would have occurred even if the negligence had not.

Do You Need a Nurse to Testify Against a Nurse to Bring a Viable Claim?

Can a doctor provide that same expert testimony? In other words, can the plaintiff's counsel use a doctor instead of a nurse to offer opinions on the appropriate nursing standards and whether the nurse complied with those nursing standards in this case?

You would think Maryland law would be settled on this point. But it is not. If you read Maryland law, you get the feeling that our appellate courts are not getting bogged down in labels. A doctor has the requisite training and experience to comment on a nurse's standard of care, it would seem that they would be allowed to provide the testimony. 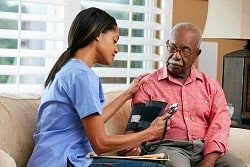 On the other hand, they could follow the much-debated Illinois case where the court rejected a medical doctor introduced to offer opinion testimony on the appropriate standard of nursing care by failing to adequately communicate a patient's condition to the attending doctor.

The court's rationale was that nursing is a unique profession that is readily distinguishable from a medical doctor. The court was also concerned that a doctor would raise the bar too high on what should reasonably be expected of a nurse.

How would a Maryland court have ruled in this case? The ultimate answer is that we do not know. Accordingly, plaintiffs' malpractice lawyers are best served by playing it safe and naming a nurse to testify on the nursing standard of care.

Settlements and Verdicts Against Nurses

Below are example settlements and verdicts against nurses and nurse practitioners.  This nursing lawsuit cases list includes only one Maryland case, our verdict in Baltimore City for $5.2 million.

But you cannot examples of nursing home malpractice and their settlement payouts or verdicts in other nursing court cases to predict or calculate the settlement value of your case, even for cases that seem strikingly similar to your own legal case against a nurse.

If you live in the Baltimore Washington area and are considering suing a nurse for negligence, call 800-553-8082 or get a free online consultation.